They will purge any and all opposition to the new world order. They want to control the lives, opinions, and freedoms of people they don’t like.  Real bastions of free speech such as Gab and Rumble, are already gaining thousands of new subscribers.  Facebook and Twitter will be entirely consumed by unhinged leftwingnuts spewing their ideas on how they’re going to load all the MAGA folks and conservatives on to train cars and send them off to ‘reeducation camps’. It’s already happening.

If they want a civil war, this is the best way to start one.

A pro-Trump meme maker and Twitter troll was indicted Wednesday by the feds for using the social media platform to ‘spread election disinformation’ to Hillary Clinton voters in 2016.

31-year-old Mackey was arrested in West Palm Beach on one charge of conspiracy against rights and faces up to 10 years in prison.

According to the unsealed indictment, Mackey conspired with others on Twitter to encourage black people to cast their votes via text message.

The Eastern District of New York said in its indictment that one week before the 2016 election, Mackey tweeted an image of a black woman in front of an “African Americans for President Hillary” sign.

Emblazoned on the picture was the message: “Avoid the Line. Vote from Home. Text ‘Hillary’ to 59925. Vote for Hillary and be a part of history”

According to the complaint, more than 4,900 people ‘cast their vote via text message.’

Buzzfeed News said they sent a text message to the number and Hillary Clinton’s campaign actually responded and redirected people to the proper channels.

So how many people just sent a text message out of curiosity and didn’t actually fall for the meme?

The most chilling part of the indictment is the criminalization of normal political speech and banter:

“Starting in at least 2015, MACKEY participated in numerous Group DMs. These groups, which at times included dozens of individuals, and at times had overlapping membership, served as forums for the participants to share, among other things, their views concerning how best to influence the Election. Among other things, MACKEY and the members of these groups used the Group DMs to create, refine and share memes and hashtags that members of the groups would subsequently post and distribute.”

An example of the criminal behavior describes Mackey and his friends on Twitter joking around in private groups about trolling “shitlibs” with memes:

“For example, on or about December 22, 2015, MACKEY and his associates exchanged messaged in the Fed Free Hatechat relating to memes suggesting that certain voters were hiding their desire to vote for a Presidential candidate from on of the two main political parties (“Candidate 2”). MACKEY stated, using MACKEY Account 1, “It’s actually a great meme to spread, make all these shitlibs think they’re (sic) friends are secretly voting for (Candidate2)”. A participant in the group conversations, a Twitter user, described it as “perfect psyops” to which MACKEY later replied, “We’ve hit upon meme magic motherlode.” The next day, MACKEY used MACKEY Account 1 to retweet a tweet that contained one of the discussed memes with the following text: “If you need support, I am here for you #(Candidate 2) Closet.”

The feds are criminalizing political speech in order to lock up Trump supporters.

Even worse, NOBODY who unleashed the might of the US government to illegally spy on Trump’s 2016 campaign has gone to jail. 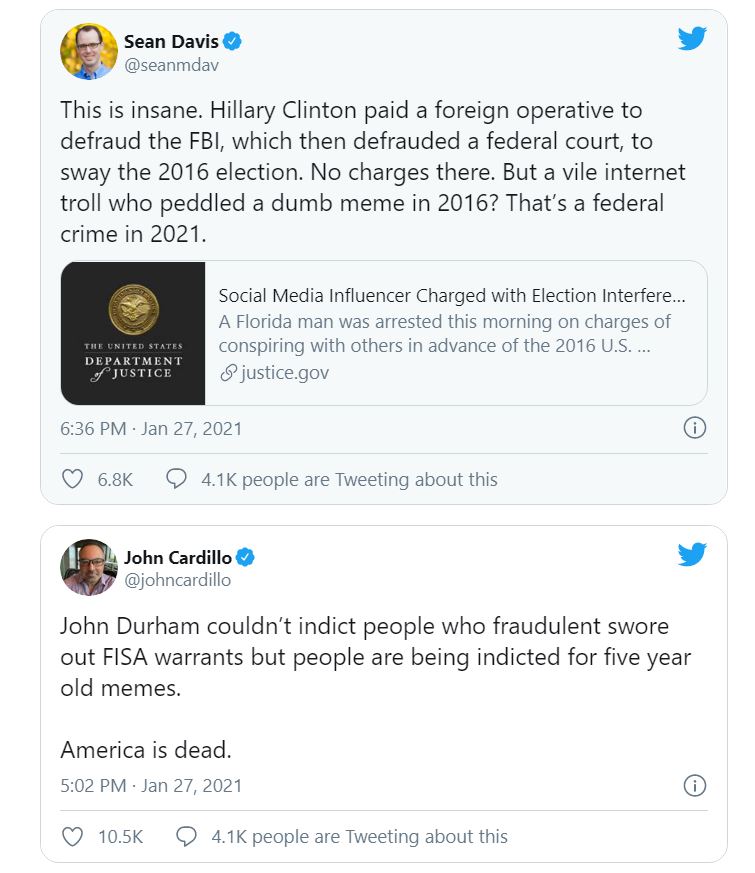 It’s okay when the shitlibs do it:

Far-left activist and “comedian” Kristina Wong posted the same fake voting meme on Twitter in 2016 — but she targeted TRUMP SUPPORTERS. 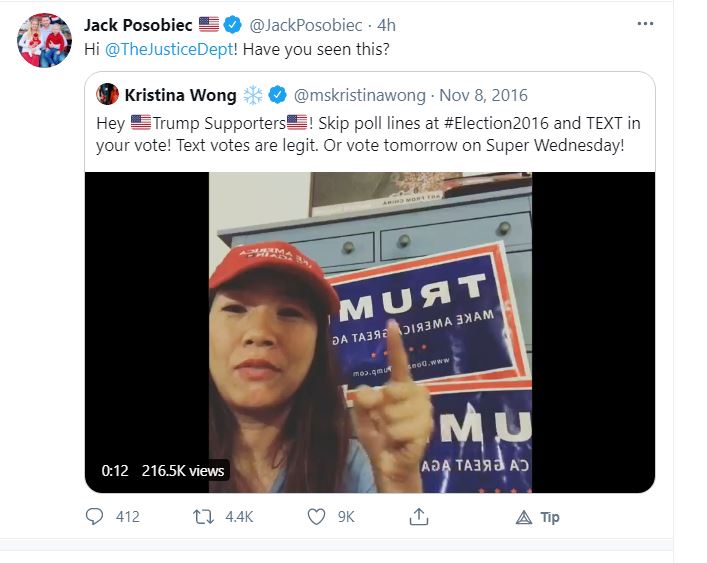 So will the Eastern District of New York be dropping by Kristina’s house tomorrow?

Erik Paulsen and Nathan Reilly of the Eastern District of New York, and Trial Attorney James Mann of the Criminal Division’s Public Integrity Section: You going to prosecute this too? https://t.co/aY6u4nxgXv

Or did Pres. Harris instruct you to only prosecute Conservatives?

Anyone who really believes that you can text a vote for an election has a shit factory for a brain and shouldn’t be allowed to vote or breed.

Here are the real crimes that the FBI should investigate:

The Dems engaged in an attempted coup d’etat in 2016, with the complicity of  Obama’s DOJ and FBI.

Obama’s fingerprints were all over that shit. Once Brennan, Clapper, Lynch, and Comey put this whole scheme together, Obama was briefed and went along with it.

Here’s what should be investigated:

A fake dossier paid for by one political party and its candidate was used by the government to spy on that candidate’s opponent.

The Obama regime’s FISA abuse in order to get permission to wiretap Trump.

Comey, who is an unscrupulous douchebag, was part and parcel of the conspiracy to undermine the election and overthrow a duly elected president through false allegations and sedition. He also leaked classified information when it suited his purpose and lied to the FISA court.

Hillary’s Uranium One deal with the Russians netted her $145 million to her corrupt Clinton Foundation.

Mueller is as crooked as a dog’s hind leg. He eagerly participated in a wild goose chase of phantom crimes. He should be investigated, as well.

The investigation was a conspiracy to oust a duly elected President on baseless grounds.

None of the corrupt Dems involved in the seditious acts in 2016 will have SWAT teams drag them out of their houses and off to prison where they belong.

Obama weaponized government agencies against people who opposed his socialist autocracy.  The corrupt FBI needs to be dismantled and overhauled.