Government goons get to shoot unarmed political protesters in the neck for trespassing, and get away with it.

Lt. Byrd killed Ashli Babbitt in cold blood on Jan. 6 in the US Capitol.

Ashli Babbitt, a Trump-supporting US veteran, was gunned down in cold blood inside the US Capitol. She was unarmed and posed no threat to the police or anyone.

On Friday Lt. Mike Byrd was exonerated for killing Ashli Babbitt in cold blood. He gave no warning, he ran from the scene of the crime, he shot an unarmed woman dead who posed no threat.

And now he walks free.

On Monday Terry Roberts, the attorney for Ashli Babbitt’s family, released a statement following the news last week that Lt. Mike Byrd was exonerated for killing Ashli in cold blood.

Terry Roberts writes, “One cannot imagine any police department that would allow an officer to shoot an individual without first giving a reasonable warning… I find the refusal to identify the officer unprecedented , and I challenge the Capitol Police to release the detailed findings.” 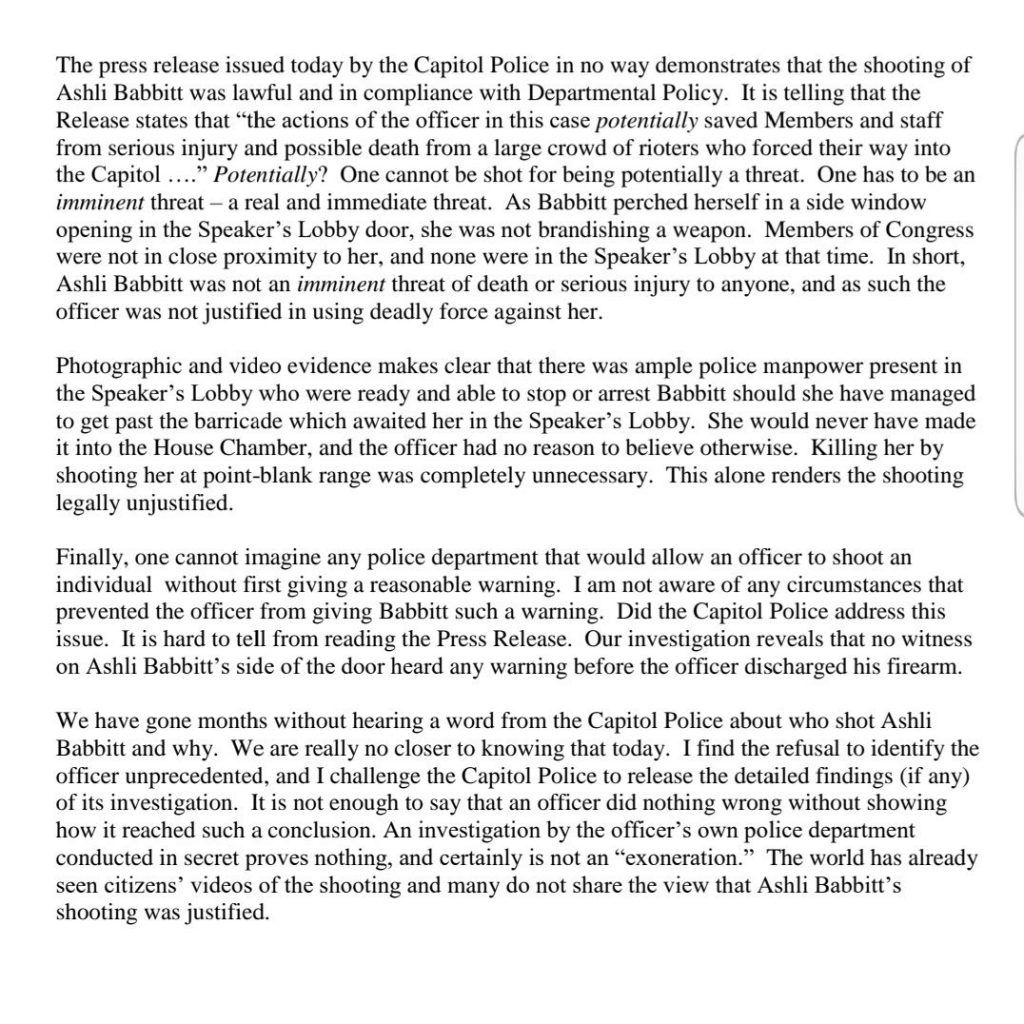 Progs have some pretty selective ideas about riots.  Burn Loot Murder lasted 7 months with 23 people s­hot dead, 700 police officers injured, and over 150 federal buildings damaged. Antifa’s rampage has resulted in damage comparable to Hurricane Sally. Combined casualties from both groups of thugs numbered 926 as of July 2020.  Anarchists took over blocks of city neighborhoods in Seattle and Portland.  They’re still at it.  They commit arson, assault, murder, and vandalize.  They’ve destroyed businesses, livelihoods, police stations, and courthouses. Very few have been arrested and charged. No one in the Dem party or liberal media calls it insurrection or demands justice.

When Prog radicals stormed into the Hart Senate building and the state capitols of Iowa, Wisconsin, and Georgia, none of them were shot. When left-wing protesters tried to break down the door to the SCOTUS while Bret Kavanaugh was sworn in, no one was shot.  Sandy Cortez led a group of protesters that stormed Pelosi’s office in 2018 for hours until Capitol Hill Police arrested 51 of the protesters for unlawful entry and protest; a stunt that was praised by the media. No one was shot.