Biden really screwed the pooch on the withdrawal. The video shows a man falling from a plane fleeing the Kabul airport. The crowds at the airport were worse than the withdrawal from Vietnam. This is Biden’s Saigon. 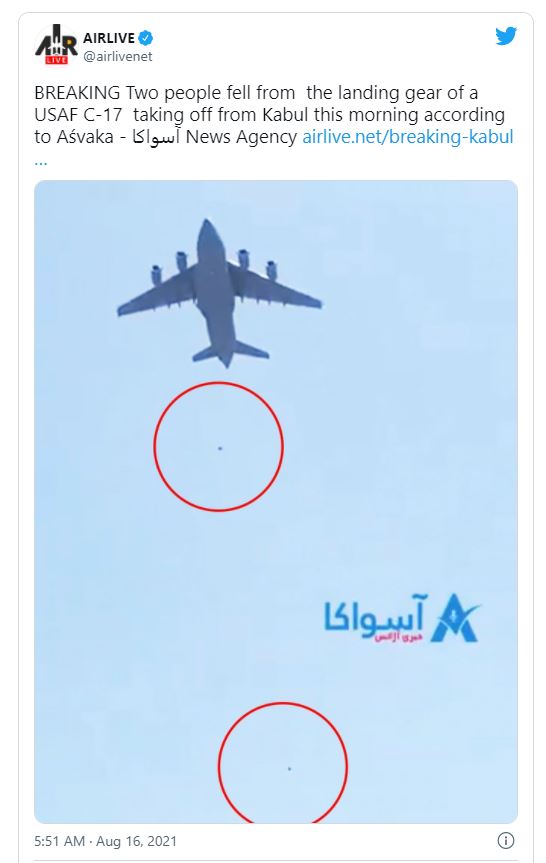 This is like a horror film #Kabul #Afghanistan pic.twitter.com/lhPLgFBrHa

In the wake of Biden’s withdrawal decision, the U.S. pulled its air support, intelligence and contractors servicing Afghanistan’s planes and helicopters. That meant the Afghan military simply couldn’t operate anymore. The same happened with another failed American effort, the South Vietnamese army in the 1970s, said retired Lt. Gen. Daniel Bolger, who commanded the U.S.-led coalition’s mission to train Afghan forces in 2011-2013.noted that the Afghan military collapsed because they relied heavily on U.S. air support, and it could not function after Biden pulled U.S. support:

The Afghan army fighting alongside American troops was molded to match the way the Americans operate. The U.S. military, the world’s most advanced, relies heavily on combining ground operations with air power, using aircraft to resupply outposts, strike targets, ferry the wounded, and collect reconnaissance and intelligence.

In the wake of Biden’s withdrawal decision, the U.S. pulled its air support, intelligence and contractors servicing Afghanistan’s planes and helicopters. That meant the Afghan military simply couldn’t operate anymore. The same happened with another failed American effort, the South Vietnamese army in the 1970s, said retired Lt. Gen. Daniel Bolger, who commanded the U.S.-led coalition’s mission to train Afghan forces in 2011-2013.

Biden tried to blame former President Donald Trump in a statement on Saturday for his own actions; however, experts quickly pushed back on Biden’s attempts to deflect blame:

Rebeccah Heinrichs, senior fellow at the Hudson Institute, blasted Biden’s statement: “He begins by listing what his administration is scrambling to do to avoid American and partner deaths, and to have the ability to conduct counterterrorism operations. And this horrible scramble with high stakes is all because of Biden’s order to withdrawal immediately. There is plenty of blame to go around for the failures in Afghanistan, but what happens as a result of the way the withdrawal happened will be Biden’s alone. He can’t pass this off on Trump. He owns all of this. Also, I don’t care if he reads a script word for word, he needs to address the nation. There are a lot of military families who deserve it and so much more.”

Andrea Stricker, research fellow at the Foundation for Defense of Democracies (FDD): “The disastrous withdrawal from Afghanistan fits a pattern of this administration deciding on a course of foreign action without consideration for the ramifications. Biden wanted out regardless of the cost to the Afghan people, regional security, and years of effort and dedication by many brave Americans and allies. This poorly planned exit will go down in history as a major U.S. strategic failure.”

Jamil N. Jaffer — who serves as Founder and Executive Director of the National Security Institute and as an Assistant Professor of Law and Director of the National Security Law & Policy Program at the Antonin Scalia Law School at George Mason University: “Pathetic for the President to lay the situation he created by his own choices at the feet of his predecessor. Having inherited whatever he inherited, it was his job to do what the nation required, and the President ought admit he made the wrong choice. Be better @JoeBiden.”

Meanwhile, Biden is hiding in his basement and God only knows where Kammy is right now:

Biden and Kamala Harris avoided appearing on camera as Kabul, the capital city of Afghanistan, fell to the Taliban on Saturday and Sunday.

Biden spent the weekend at the Camp David presidential retreat, going on vacation as the situation worsened in Afghanistan.

Although Biden did release a written statement on Afghanistan on Saturday, he did not go on camera to reassure the American people as news broke that officials were destroying documents in the U.S. Embassy in Kabul and even taking the American flag down from the site. He has yet to speak directly to the American people on camera directly after Afghanistan’s president, Ashraf Ghani, fled the country and after the Taliban stormed the presidential palace in Kabul, with “with “exclusive” access granted to the terrorist-linked Al Jazeera network.

A senior administration official told another network that Biden would address the nation “in the next few days” about the crisis in Afghanistan.

A member of Congress on a foreign affairs committee call said, “We’ve heard more from the Taliban than we’ve heard from Biden,” according to Fox News White House Correspondent Jacqui Heinrich.

Republican members of Congress have slammed Biden for going on vacation at such a time.

Rep. Michael McCaul, R-TX, told CNN, “This is gonna be a stain on this president and his presidency.”

“And I think he’s gonna have blood on his hands from what they did,” McCaul added.

“Why is Joe Biden on vacation?” Rep. Jim Jordan, R-Ohio, asked on “Sunday Morning Futures.” “I don’t think he’s taken one question from the press this entire weekend, so this is a frightening situation.”

Banks took a conference call briefing for members of Congress on Sunday. “It’s clear the Biden administration was caught unprepared, didn’t anticipate this catastrophe and the President is hiding & asleep at the wheel,” he remarked on Twitter.

Biden ignored warnings to keep at least 2,500 troops on the ground in Afghanistan to help with negotiations between Afghanistan and the Taliban. Trump would have never pulled out in a way that left the Taliban with American weapons and equipment or placed American lives in jeopardy.

This is what the military does in actual tactical, planned withdrawals: Have troops and close air support in place before evacuation. Security transports evacuees to the airfield. Let the enemy know that if they make any moves toward the embassy and airport, they will get turned into mush by AC-130s and Apache attack helicopters. Then you start running the planes 24/7. Last ones to leave turn out the lights.
If you know anything about contingency plans, you know that Biden botched the withdrawal in four key ways: military and intelligence, coordination, planning, and communication. He also gave the Taliban a list of Americans and allies in the country, thus signing their death warrant. In July, he was warned about the situation in Kabul. His answer: “I just want to talk about happy things, man”. What a dolt. He’s clearly got dementia and his cognitive abilities are slipping. Mark Milley, Lloyd Austin, and the rest of them are buffoons who could mess up a wet dream. Biden’s regime turned what should have been a tactical withdrawal into a chaotic disaster that cost the lives of 13 service members. He has disgraced us on a world-wide stage. Our enemies are laughing and our allies are shaking their heads.
If they had any decency they would resign; from Biden on down. But decency is not a Dem virtue.

It’s going to get a lot worse.