Biden has made a lot of wild-assed claims about his personal history; none of which are true.

A couple of days ago he added a new whopper by saying he “drove an 18 wheeler”.

He also claimed to have been arrested when trying to see Nelson Mandela. 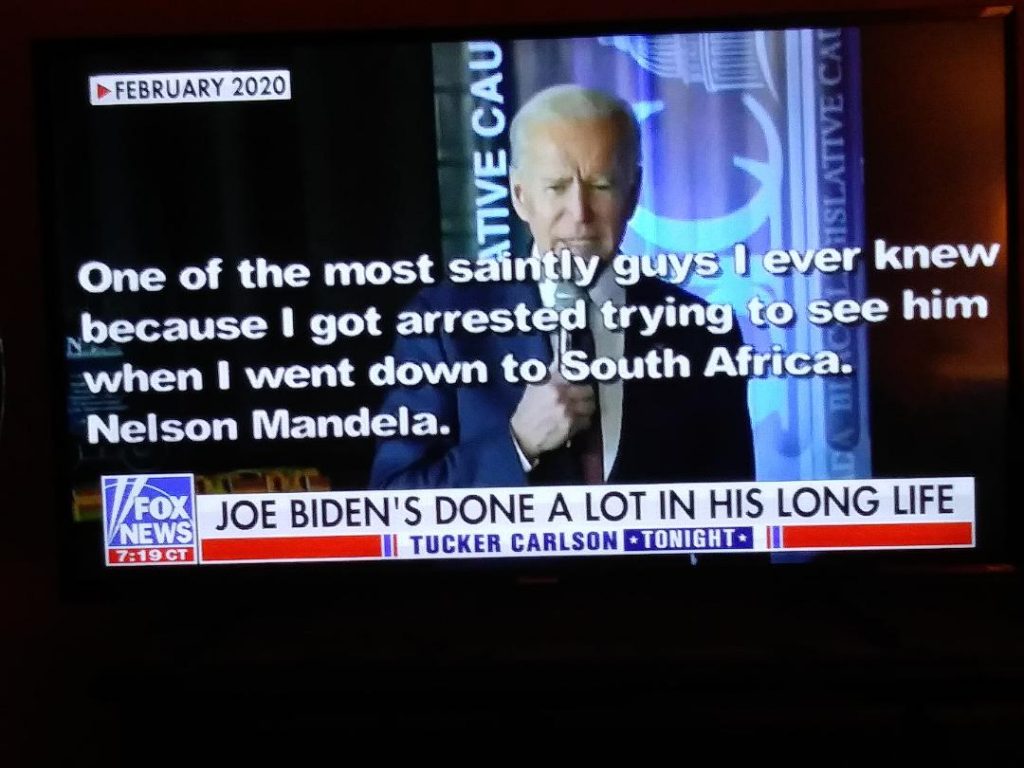 This is just the latest in a string of imaginary tales.

If there’s one thing Joe Biden loves more than approaching women from behind and putting his hands on their shoulders, it’s stealing valor. Not just troop valor, but coal miner valor, civil rights valor—if you’ve got valor, Joe Biden will steal it.

In a speech on Friday, the former vice president regaled the New Hampshire crowd with a very emotional story about a trip he once took into the “godforsaken country” of Konar province in Afghanistan. Advisors warned Biden that it would be too dangerous for him to go—but no, the vice president waved their concerns aside. “We can lose a vice president,” he recalled thinking. “We can’t lose many more of these kids.” He was going to present a Navy captain, who, under fire, had retrieved the body of another American Soldier from a 60-foot ravine, with a Silver Star.

“This guy climbed down a ravine, carried this guy up on his back under fire,” Biden said. “The general wanted me to pin the Silver Star on him. I got up there, and this is the God’s truth, my word as a Biden. He stood at attention. I went to pin it on him. He said, ‘Sir, I don’t want the damn thing. Do not pin it on me, sir. Please, sir, do not do that. He died! He died!'”

Very dramatic, and according to the Washington Post almost entirely made up. In the three minutes it took to tell the story, the Post reports, “Biden got the time period, the location, the heroic act, the type of medal, the military branch and the rank of the recipient wrong, as well as his own role in the ceremony.” The frontrunner in the Democratic presidential primary does not appear to be overly concerned with these kinds of details, however. “I don’t understand what they’re talking about, but the central point is it was absolutely accurate what I said,” he told the Post and Courier

Biden’s ’88 campaign would collapse after it was revealed he lifted a speech from Neil Kinnock, the leader of the British Labor Party. Not only did Biden plagiarize the Welshman’s speech but in the course of doing so stole coal miner valor—which he did again when running for president twenty years later. “I am a hard coal miner,” he told members of the United Mine Workers at the union’s 2008 annual fish fry, falsely. (A campaign spokesperson said Biden was joking.) Not only that, but in the course of the Kinnock scandal it came out that he had plagiarized material for a paper while in law school, which Biden claimed was not “malevolent” and a result of a misunderstanding about how to cite sources.

That experience didn’t cure him of his tendency to stretch the truth. During a presidential primary debate in 2007, Biden claimed that he had been “shot at” during trips to the Green Zone in Iraq. Later, when asked for details about what had happened, he revised his claim: “I was near where a shot landed.”

After Biden earned the vice presidential nomination, he would go on to claim in multiple speeches to have been in a helicopter that was “forced down” into “the superhighway of terror” between Afghanistan and Pakistan. “If you want to know where al Qaeda lives, you want to know where bin Laden is, come back to Afghanistan with me,” he said in one speech. “Come back to the area where my helicopter was forced down with a three-star general and three senators at 10,500 feet in the middle of those mountains. I can tell you where they are.”

As it turned out, the helicopter had not quite been “forced down” so much as just made an emergency landing in a snowstorm.

The deeper he sinks into dementia, the more bizarre he gets.