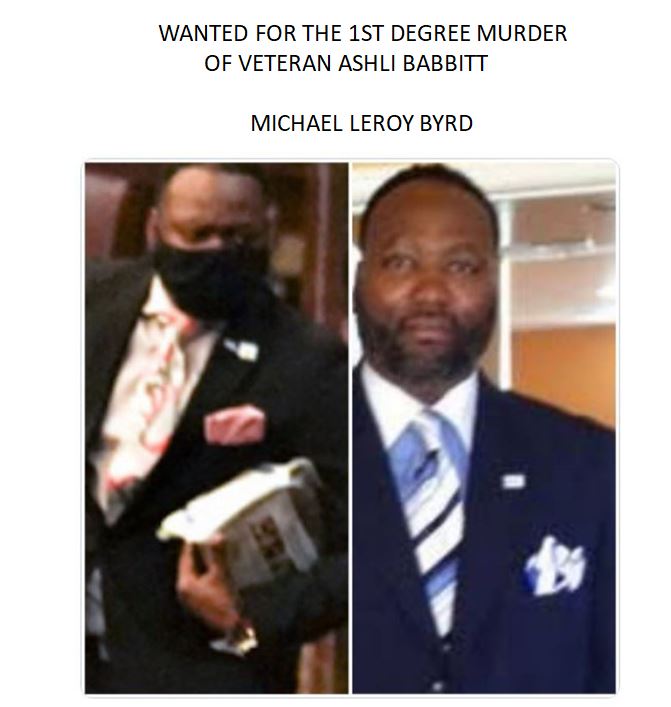 He “revealed” himself with Lester Holt, but his identity has been known for months.

Michael Byrd had to have his 15 minutes of fame, so he decided to come out on NBC News to be interviewed by a very sympathetic Lester Holt. Who is Michael Byrd? He’s the 28-year veteran of the Capitol Police who is the careless murderer of Ashli Babbitt, who did nothing to deserve to be shot in cold blood for crawling through a window.  She was UNARMED and was with other people who were close by.

How could this officer think it was necessary to murder a woman like Ashli? She was not armed and not aggressive, but this is the same inept officer who recklessly left his loaded service weapon in a bathroom in the Capitol in 2019.

Until now, Michael Byrd was in the shadows and was not coming forward. For some crazy reason, he wanted to be interviewed by NBC, perhaps to garner sympathy. He claims he’s been getting death threats. We’re guessing being murdered like Ashli Babbitt is a much worse fate.

Michael Byrd has been revealed to the nation as the Capitol Police officer who shot Ashli Babbitt on January 6th.

He’s walking free thanks to a corrupt internal Capitol Police investigation that “cleared” him of any wrongdoing. They are not accountable to the public and they couldn’t care less.

When Prog radicals stormed into the Hart Senate building and the state capitols of Iowa, Wisconsin, and Georgia, none of them were shot. When left-wing protesters tried to break down the door to the SCOTUS while Bret Kavanaugh was sworn in, no one was shot.  Sandy Cortez led a group of protesters that stormed Pelosi’s office in 2018 for hours until Capitol Hill Police arrested 51 of the protesters for unlawful entry and protest; a stunt that was praised by the media. No one was shot.