The CBC deleted the interview after it went viral.

While some links are redirected to a 404 page, others are brought to a newly updated episode that does not include Philippe as a guest, and has his segment cut out from the broadcast.

The CBC invited an author who wrote about “detonating” white people, while “the exits are locked and the air vents [are] filled with gas” to be interviewed on their flagship arts program. 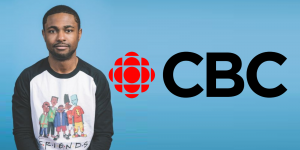 The poster boy for black fragility

The CBC host then explained that she was Jewish, but apologized to the author that his experience of the world made him feel this way.

Ben Philippe appeared on Q where he discussed his newest book and racial issues in North America.

During this program, an excerpt from his book was read where he considered what his actions would be in a race war.

“When this race war hits its crescendo. I’ll gather you all into a beautifully decorated room under the pretense of unity. I’ll give a speech to civility and all the good times we share; I’ll smile as we raise glasses to your good, white health, while the detonator blinks under the table, knowing the exits are locked and the air vents filled with gas.”

After the host read this passage aloud, she responded by saying: “I mean that’s… I’m a Jewish person, and my grandparents survived the holocaust. I can’t tell you how it felt to read that sentiment, and I wanted to say to you that I’m so sorry that your experience of the world made you feel that way.”

As for Philippe: Bring it, nig. We are sick of your threats and saber-rattling. Newsflash for all the stupid, illiterate, uneducated, race pimps who think we’re impressed with their raised fists and “kill whitey” bullshit: You are a fucking joke.  You think just because you freely rampage through the Dem-controlled urban dystopias, you would have the same success with the rest of North America; the United States in particular. Wrong.

You couldn’t follow through on your little race war if you tried. Do you know how many people in the U.S. own guns? Bring it you racist muthafuckas. I’m armed and I will shoot.