The Centers for Disease Control admits the corrupt practice aimed at inflating the death figures for COVID-19.

Can any government statistics on COVID-19 deaths be trusted?

It is an open question now that we are learning that the highly respected, world-class Centers for Disease Control and Prevention (CDC) has been lying to us.

This revelation comes a few days after I wrote here at American Thinker that New York City was lying about COVID-19 deaths.  The normal rules about reporting deaths have been violated by that city in the rush to inflate the body count, presumably to steer more taxpayer money to the Big Apple.

That the CDC isn’t telling the truth to Americans is no conspiracy theory:  it’s right out there in the open for everyone to see.  The CDC openly admits that it is fudging the COVID-19 death figures.

We know this because, among other truth-tellers, a plainspoken small-town physician from Kalispell, Montana, has pulled back the curtain.

Why should anyone care how a certificate of death is made?

Everyone should care “today when governments are making massive changes that affect our constitutional rights and those changes are based on inaccurate statistics,” Bukacek says.

The system is deeply flawed, she argues:

“Few people know how much individual power and leeway is given to the physician, coroner, or medical examiner, signing the death certificate.  How do I know this?  I’ve been filling out death certificates for over 30 years.

More often than we want to admit, we don’t know with certainty the cause of death when we fill out death certificates.  That is just life.  We are doctors, not God.  Autopsies are rarely performed and even when an autopsy is done the actual cause of death is not always clear.  Physicians make their best guesstimate and fill out the form.  Then that listed cause of death … is entered into a vital records data bank to use for statistical analysis, which then gives out inaccurate numbers, as you can imagine.  Those inaccurate numbers then become accepted as factual information even though much of it is false.”

……”So even before we heard of COVID-19, death certificates were based on assumptions and educated guesses that go unquestioned.  When it comes to COVID-19 there is the additional data skewer, that is –get this— there is no universal definition of COVID-19 death.  The Centers for Disease Control, updated from yesterday, April 4th, still states that mortality, quote unquote, data includes both confirmed and presumptive positive cases of COVID-19.  That’s from their website.”

Translation?  The CDC counts both true COVID-19 cases and speculative guesses of COVID-19 the same.  They call it death by COVID-19.  They automatically overestimate the real death numbers, by their own admission.  Prior to COVID-19, people were more likely to get an accurate cause of death written on their death certificate if they died in the hospital.  Why more accurate when a patient dies in the hospital?  Because hospital staff has physical examination findings labs, radiologic studies, et cetera, to make a good educated guess.  It is estimated that 60 percent of people die in the hospital.  But even [with] those in-hospital deaths, the cause of death is not always clear, especially in someone with multiple health conditions, each of which could cause the death.

Bukacek refers to a March 24 CDC memo from Steven Schwartz, director of the Division of Vital Statistics for the National Center for Health Statistics, titled “COVID-19 Alert No. 2.”

“The assumption of COVID-19 death,” she says, “can be made even without testing.  Based on assumption alone the death can be reported to the public as another COVID-19 casualty.”

……Of course, the disease’s body count is not the sole concern we should have about the Chinese contagion, but it is undeniably the primary driver of the rampant mass hysteria that has allowed state and local governments across America to crush our cherished civil liberties.

As they say in newsrooms:  if it bleeds, it leads.  Deaths are always going to be more “sexy” than confirmed cases.  It is the number that really, really counts, and Americans know this.

The fraudulent death statistics also give ammunition to the legions of snitches and scolds who try to shame their fellow Americans for attending church or playing catch in an empty park or taking a harmless drive in the countryside to prevent themselves from going stir-crazy.

First, experts told us 2.2 million Americans would die.  Then the number fell off a cliff, plunging down to around 200,000.

As of April 8, the number of those expected to die from the disease by August 4 was down to 60,000, or roughly a very nasty flu season.  The new figure comes from the influential model produced by the University of Washington that the White House regularly cites.

Bukacek refers to a March 24 CDC memo from Steven Schwartz, director of the Division of Vital Statistics for the National Center for Health Statistics, titled “COVID-19 Alert No. 2.” 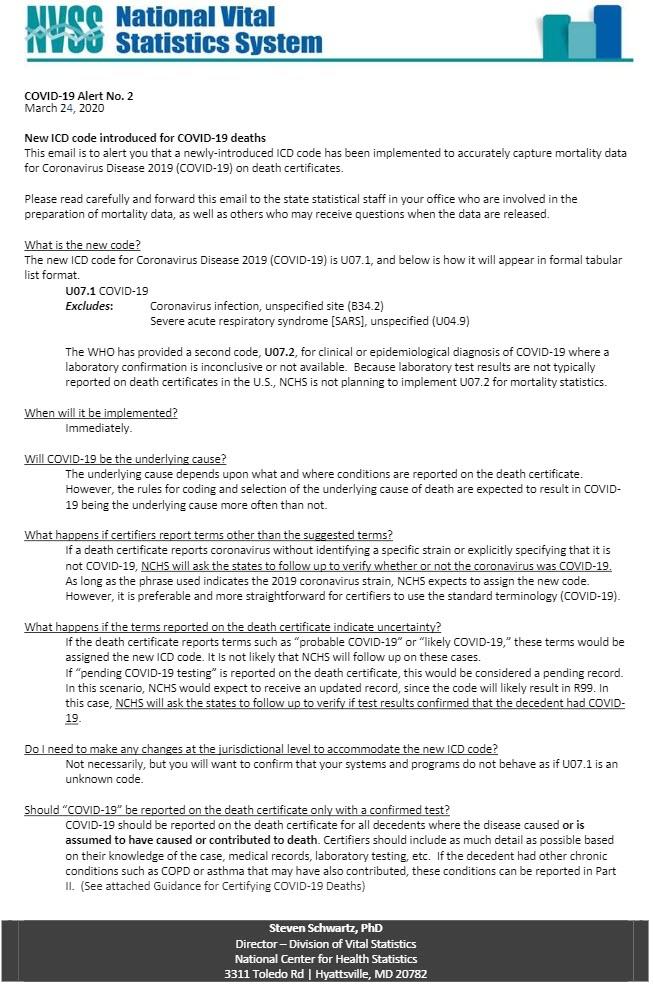 “The assumption of COVID-19 death,” she says, “can be made even without testing. Based on assumption alone the death can be reported to the public as another COVID-19 casualty.”

……Although, an emerging body of evidence suggest shutting down an entire nation may not be a good idea after all to combat such a virus. As Ariel Pablos-Mendez, M.D., MPH a professor of Medicine at Columbia University Medical Center, New York and former head of global health at the U.S. Agency for International Development (USAID) explains:

“At the end of the day, super-spreader COVID-19 is likely to infect a majority of the population, no matter how far apart we stay from one another in the coming weeks. The good news is that once immune, most people can go back to work. Our containment efforts must focus on the most vulnerable: the elderly and patients with underlying cardiopulmonary diseases.

We need to flatten the curve for the elderly but accelerate herd immunity for the healthy so that we don’t kill the economy trying to outrun the pandemic in lockdown. While home isolation for one month might stop an outbreak, it merely sets the clock back as the virus may return if it is not globally defeated.”

The CDC also lied about the estimated deaths from H1N1.

A Dr. in Pennsylvania predicted that the U.S. would have 100 million cases of COVID in four weeks and that number would double every day.

Much of the dire predictions and numbers of fatalities are driven by media-stoked hysteria.

While the world frets over this COVID shit, thousands have already died from the flu this year.

The worst thing about the inflated numbers is the paranoid reaction from sheeple who believe everything they’re told.

The curve is already flat