The SCOAMF is back out on the campaign trail, too.  Imagine the bile-spewing from the media if it was Bush.

Take a good look at the pictures and read the articles. This is a preview of what will happen if there is ever a total breakdown of civilization and infrastructure. They knew it was coming and didn’t bother to prepare. Now, they’re depending on the federal government to rescue them. 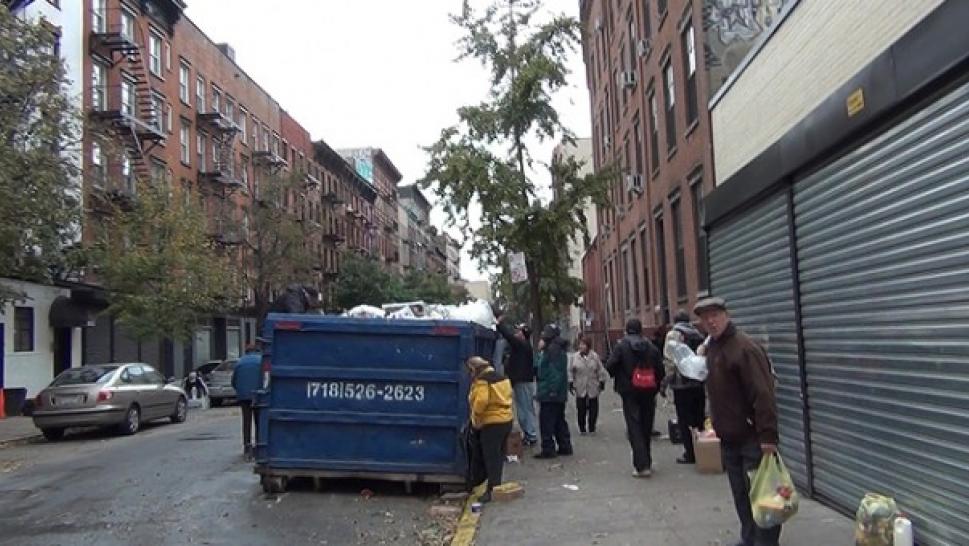 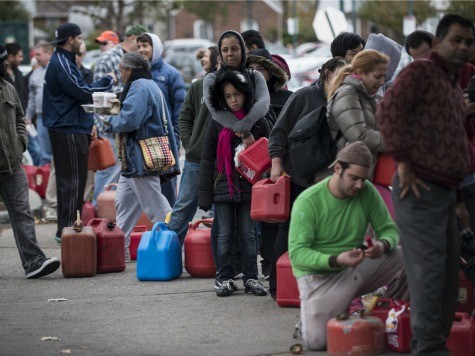 A New York man was arrested after pulling a gun on another driver as they waited in line for gas, one of several examples of frayed nerves caused by a gas shortage in the wake of superstorm Sandy.

In New Jersey, where lines at the few stations that were able to pump fuel stretched for miles, state troopers were deployed at all gas stations along the NJ Turnpike and Garden State Parkway as the region endures its fourth full day with massive power outages. Officials say Sandy-driven closures at refineries, the inability of tankers to dock and most of all, outages that prevent pumps from drawing fuel from underground tanks at stations have fewer than half of stations in the region pumping.

It was too much for Sean Bailey, 35, of Queens, who authorities say he tried to cut in line at a gas station in Queens early Thursday and pointed a pistol at another motorist who complained. Bailey was arrested on charges of menacing and criminal possession of a weapon and if convicted, could face up to 15 years in prison.

Looters have taken advantage of the confusion and desperation by dressing as Con Edison workers and breaking into houses on the pretext that they were doing electrical repairs.

Parts of New Jersey are still without power.

New Jersey turns away cleanup crews for being non-union.

Remember,  the flooding has also affected plumbing and sanitation.   People are urinating and defecating wherever they can. There’s nowhere to bathe. The possibility of disease and illness is compounded by the lack of utilities.

Mitt Romney urged his supporters to help the Red Cross by donating food and clothes.  In what can only be described as the best example of ‘no good deed goes unpunished’, the leftards at MSNBC ridiculed Romney, and the Red Cross refused the donations because it “goes against their guidelines”.

Apparently, the bureaucratic numbnuts at the Red Cross only accept cash. The assclowns at MSNBC think that “tables piled high with flashlights, batteries, diapers, toothbrushes, mini-deodorants, fleece blankets, cereal, toilet paper and canned goods” along with two large television screens calling for donations to the Red Cross demonstrates a lack of compassion.

Not one bit of common sense in the face of disaster.

Speaking of numbnuts, Michael Bloomberg knows exactly what caused Hurricane Sandy, and he says to support Obama because he’ll “lead the way on climate change”. Tornadoes, earthquakes, tsunamis, thunderstorms, hurricanes, and the seasonal crap like spring, summer, fall, and winter are all the fault of “man made” climate change, and Obama will lead the way. Like he did with the rest of his eco-scams.  There are dozens of people dead, thousands homeless, and mob violence in the streets, but all Bloomberg can muster is debunked horseshit. The more he opens his piehole, the more he embarrasses himself.

Observe the behavior of lowlife politicians and media commentators who exploit natural disasters to insult the intelligence of the American people.  Watch as the lumbering government machine wraps red tape all over this fucking mess.

Watch what happens in New York, New Jersey, and the other affected areas, and learn.