Is it illegal to travel with money now?

Usually, you see the trending topic first and then check to find out what it’s about, but in this case, we saw the tweet first and knew exactly why “civil asset forfeiture” was trending. CBS Dallas-Fort Worth on Tuesday reported on a police dog that was being praised for sniffing out $100,000 cash in a woman’s luggage at a Dallas airport. 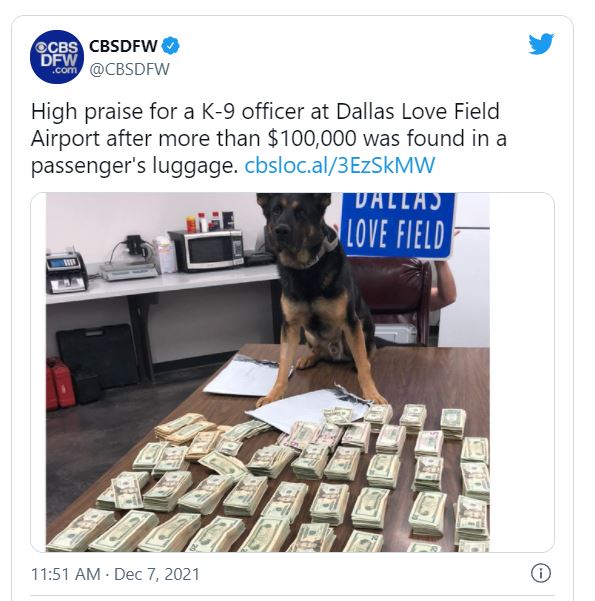 “On December 2 the canine — named ‘Ballentine’ — alerted on an individual checked suitcase. It turns out the bag, that belonged to 25-year-old woman from Chicago who was on a layover at the airport, contained blankets and two large bubble envelopes filled with $106,829 in cash.

The woman who owned the bag was not arrested, but the money was seized and police say it will be subject to the civil asset forfeiture process.”

You’re free to go, but the money stays with us. Yes, apparently there are rules about this, but not everyone considers this a cute dog story. 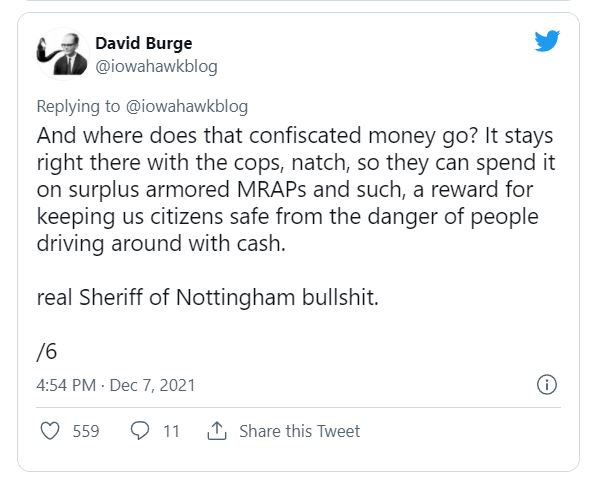 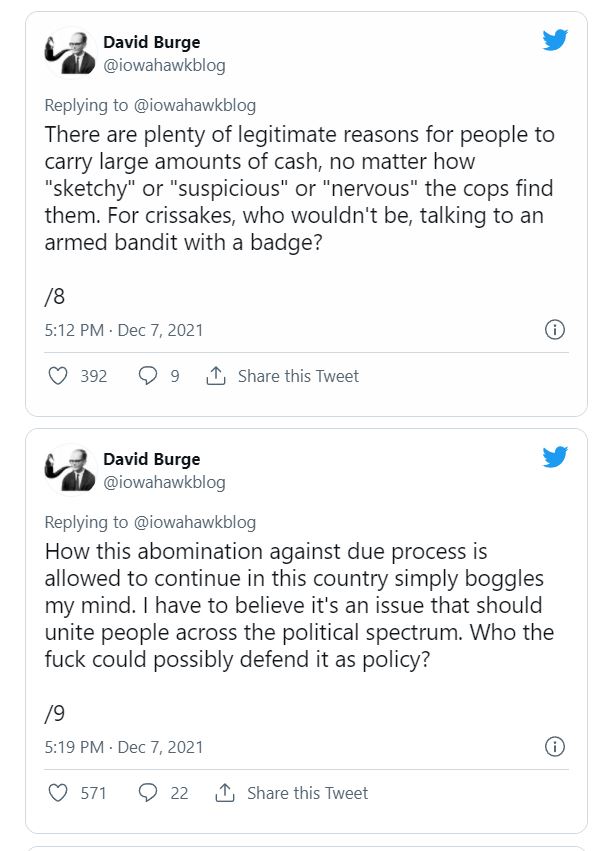 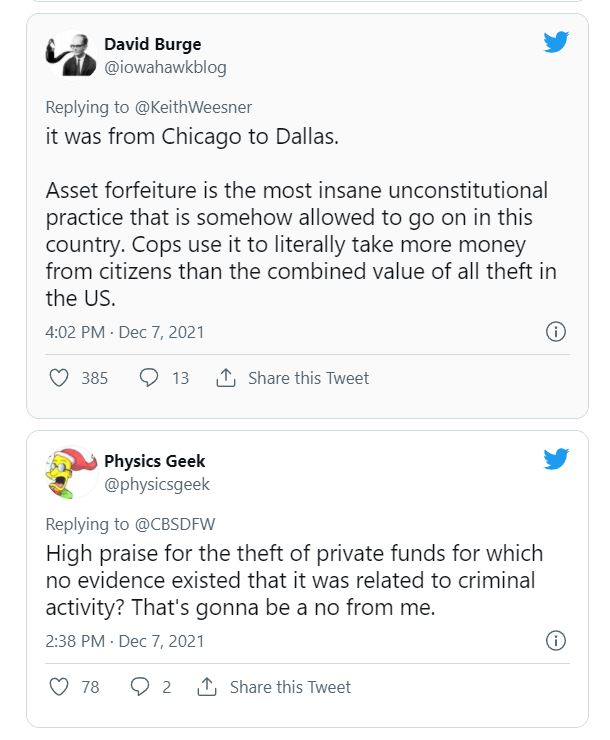 Here’s an interesting factoid about contemporary policing: In 2014, for the first time ever, law enforcement officers took more property from American citizens than burglars did. Martin Armstrong pointed this out at his blog, Armstrong Economics, last week.

Officers can take cash and property from people without convicting or even charging them with a crime — yes, really! — through the highly controversial practice known as civil asset forfeiture.

Last year, according to the Institute for Justice, the Treasury and Justice departments deposited more than $5 billion into their respective asset forfeiture funds. That same year, the FBI reports that burglary losses topped out at $3.5 billion.

Armstrong claims that “the police are now taking more assets than the criminals,” but this isn’t exactly right: The FBI also tracks property losses from larceny and theft, in addition to plain ol’ burglary. If you add up all the property stolen in 2014, from burglary, theft, motor vehicle theft and other means, you arrive at roughly $12.3 billion, according to the FBI. That’s more than double the federal asset forfeiture haul.

One other point: Those asset forfeiture deposit amounts are not necessarily the best indicator of a rise in the use of forfeiture. “In a given year, one or two high-dollar cases may produce unusually large amounts of money — with a portion going back to victims — thereby telling a noisy story of year-to-year activity levels,” the Institute for Justice explains. A big chunk of that 2014 deposit, for instance, was the $1.7 billion Bernie Madoff judgment, most of which flowed back to the victims.

For that reason, the net assets of the funds are usually seen as a more stable indicator — those numbers show how much money is left over in the funds each year after the federal government takes care of various obligations, like payments to victims. Since this number can reflect monies taken over multiple calendar years, it’s less comparable to the annual burglary statistics.

Still, even this more stable indicator hit $4.5 billion in 2014, according to the Institute for Justice — higher again than the burglary losses that year.

This shit happened earlier this year:

Arizona passed a law raising the standard of evidence for asset forfeiture. That didn’t help Jerry Johnson when Phoenix police seized his cash.

A North Carolina man is fighting to get back $39,500 in cash after police in Phoenix, Arizona, seized the money from him at an airport on suspicion that it was drug money, despite never charging him with a crime.

The Institute for Justice, a libertarian-leaning public interest law firm, filed an appeal Monday in the Arizona Court of Appeals on behalf of Jerry Johnson. Johnson owns a trucking company and says he flew to Phoenix last August to possibly purchase a semi-truck at auction.

“I flew to Phoenix thinking I could get a good deal on a truck that would allow me to expand my business,” Johnson said in an Institute for Justice press release. “But instead, the police took my money without ever charging me with a crime. It’s been a struggle to lose my savings, and now my business is barely getting by. I’m fighting for my money, but I’m also fighting because this should never happen to anyone else.”

The Institute for Justice is currently litigating a separate class-action lawsuit on behalf of people whose cash was seized by the Drug Enforcement Administration (DEA) at airports. One of the lead plaintiffs in that case, Stacy Jones, had  $43,167 in cash seized by the DEA as she was trying to fly home to Tampa, Florida, from Wilmington, North Carolina. Jones says the cash was from the sale of a used car, as well as money she and her husband intended to take to a casino.

Although it is legal to fly domestically with large amounts of undeclared cash, police have a habit of seizing currency from travelers under civil asset forfeiture laws. This practice allows law enforcement to seize property—cash, cars, guns, houses—suspected of being connected to criminal activity, even if the owner is never charged or convicted of a crime.

The DEA and local police regularly snoop on travel records and maintain a network of travel industry employees who act as confidential informants. A 2016 USA Today investigation found the DEA seized more than $209 million from at least 5,200 travelers in 15 major airports over the previous decade.

……More than half of U.S. states have passed some form of asset forfeiture reform because of such concerns. The Arizona House passed a bill in February that would require law enforcement to obtain a criminal conviction before a defendant’s assets could be forfeited. If it passes the state senate, Arizona would join New Mexico, Nebraska, and North Carolina in essentially eliminating civil asset forfeiture.

The state already passed reforms in 2017 to raise the evidentiary threshold for forfeitures from “a preponderance of evidence” to “clear and convincing evidence,” but that did not help Johnson.

After Johnson challenged the seizure and presented bank statements and tax returns to establish ownership of the money, the judge in his case ruled that because of inconsistencies in his story and circumstantial evidence offered by prosecutors—an old criminal record, buying a last-minute ticket with a quick turnaround, his nervous appearance in the airport, having three cell phones, and the alleged odor of marijuana on the cash—he hadn’t established a legitimate interest in the cash.

“In Arizona, prosecutors are required to prove through clear and convincing evidence that money is connected to criminal activity before the property can be forfeited,” Institute for Justice senior attorney Dan Alban said in a press release. “But instead of holding the state to its burden of proving guilt, the court required Jerry to prove his own innocence.”

This is legalized arbitrary theft. It’s an unconstitutional seizure of personal assets by a bunch of overzealous Barney Fifes and their DEA/IRS partners.  This is not the way to convince citizens to ‘Back the Blue’.