Protesters in Atlanta are calling for violence against police officers and law enforcement entities following a police-involved shooting on Wednesday that left a state trooper wounded and one man dead.

“Consider this a call for reciprocal violence to be done to the police and their allies. On Friday, January 20th, wherever you are, you are invited to participate in a night of rage in order to honor the memory of our fallen comrade,” the group wrote on Twitter, in an apparent violation of the platform’s terms and conditions.

The account claims to be a part of Defend the Atlanta Forest, one of the multiple groups protesting in an area where the city is set to construct the new Atlanta Public Safety Training Center.

……In another tweet, posted several hours later, the group added: “The police will kill you if given the chance. Now is the time for bravery. Take care of each other. Be dangerous together.”

……The upcoming event comes after a Georgia State Patrol trooper, wearing a bulletproof vest, was shot in the abdomen Wednesday morning. It happened as police tried to clear an encampment near the site where the $90 million Atlanta Police Department (APD) facility will be constructed.

The sweep was conducted as “an operation to identify people who are trespassing and committing other crimes on the property,” the Georgia Bureau of Investigation (GBI) said.

“At about 9:00 a.m. today, as law enforcement was moving through the property, officers located a man inside a tent in the woods. Officers gave verbal commands to the man who did not comply and shot a Georgia State Patrol Trooper,” GBI said in a statement. “Other law enforcement officers returned fire, hitting the man.”

In December of 2022, the GBI arrested five Antifa terrorists at the so-called autonomous zone at the site of the future Atlanta Public Safety Training Center. Since June 2021, Antifa and other far-left extremists from across the US have descended on the location to prevent the construction of what they call a “cop city.” Responding law enforcement were assaulted with rocks and bottles by militants occupying makeshift treehouses. The GBI says it found explosive devices and gasoline after the rioters were cleared from the area. 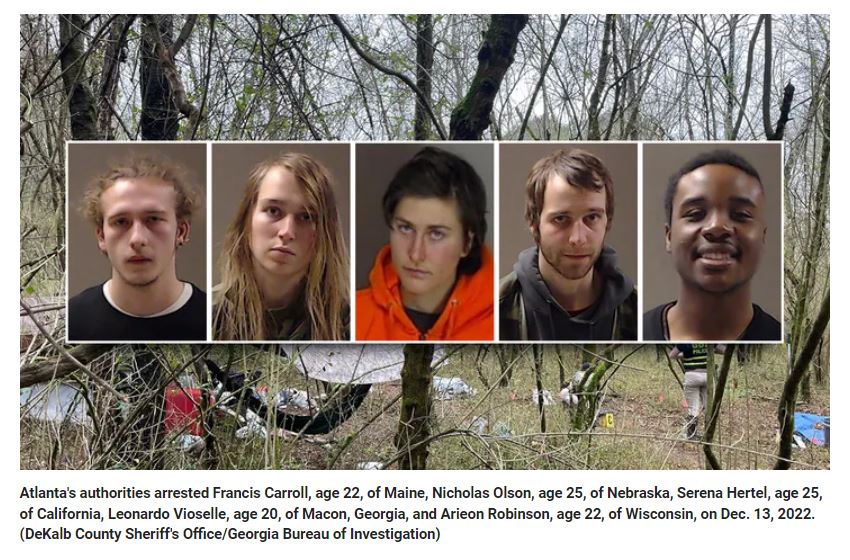 Don’t expect them to get the same treatment as the Jan 6 political prisoners, who are incarcerated in Biden’s DC gulag while Antifa and BLM thugs who riot and commit murder get off light.