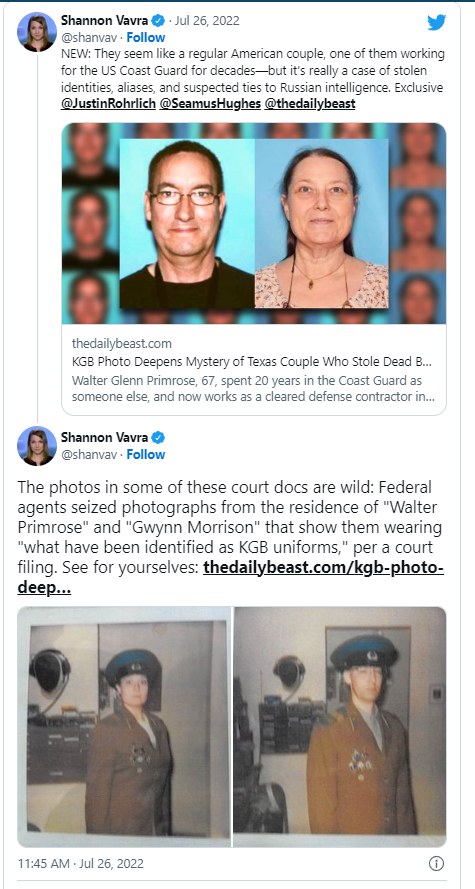 A U.S. Coast Guard defense contractor and his wife were arrested by federal authorities last Friday in Kapolei, on the Hawaiian island Oahu.

The couple, Walter Primrose and Gwynn Morrison, are being charged with aggravated identity theft, conspiracy to commit an offense against the U.S. and false statement in an application for a passport, according to Hawaii court documents.

The two had been living under the stolen identities of deceased infants Bobby Edward Fort and Julie Lyn Montague for decades, according to the New York Post.

To further increase the suspicion, the couple owned photos of themselves adorned in former Russian spy agency KGB uniforms. For this, Assistant U.S. Attorney Thomas Muehleck wants the two held without bail.

Primrose used the stolen identity to obtain documents such as a driver’s license and a passport, but also secret security clearance with the U.S. Coast Guard and later, Defense Department credentials as a defense contractor, according to AP News.

Primrose served as an avionics electrical technician in the USCG for decades, until 2016, when he retired and became a USCG defense contractor at an air station in Honolulu.

As for his wife, Morrison, a “close associate” said that she lived in Romania back when it was still a Soviet bloc country, Attorney Muehleck allegedly said.

……According to AP, Primrose and Morrison were born in 1955, went to high school in Port Lavaca, Texas, and even attended Stephen F. Austin University.

The father of one of the infants was stunned by what had become of his dead daughter’s name.

John Montague lost his daughter in 1968. She was just three weeks old.

……It is not clear from the court papers what the couples’ motives were for taking the names of the infants in 1987.