UPDATE: Broward County has chickenshits on its police force.

In a deadly massacre at Marjory Stoneman Douglas high school in Parkland, Florida that resulted in the loss of at least 17 lives, new reports are surfacing that not just one Sheriff’s deputy, but four deputies waited for minutes outside the school during Nikolas Cruz’s rampage.

Broward County Sheriff Steve Israel revealed on Friday, a day after CNN’s “scripted” gun control town hall, that deputy Scot Peterson waited for four minutes outside the school while Cruz was firing shots at defenseless schoolchildren and did “nothing” during the active shooter situation.

……It turns out that Peterson is not the only Broward County officer who is being scrutinized in the aftermath of a mass shooting that is being picked apart in the media. As the Washington Examiner reported, there are as many as four Sheriff’s deputies who stand accused of not entering the high school to stop Cruz during his massacre.

What a craven douchebag. He was trained for this kind of shit, but he hid while kids were being mowed down by a wackjob. 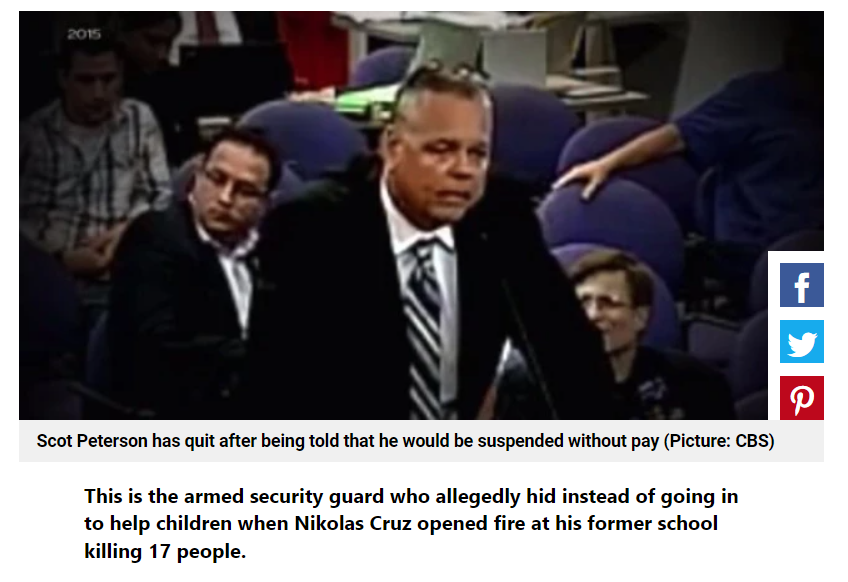 Deputy Scot Peterson, of the Broward County Sheriff’s Office, was armed and stationed on the school’s campus when a suspect identified by authorities as Nikolas Cruz opened fire with an AR-15 rifle, leaving 17 people dead and others wounded.

Peterson resigned Thursday after video surveillance showed he never entered the school, even though he “clearly” knew there was a shooting taking place, officials said. The revelation prompted widespread outrage.

The deputy “was seeking cover behind a concrete column leading to a stairwell,” Officer Tim Burton of the Coral Springs Police Department…

……When a WSVN-TV reporter tried to approach Peterson’s Boynton Beach home for an interview Thursday, he said he encountered a contingent of six police officers standing guard.

“They prevented us from approaching the house,” WSVN-TV’s Frank Guzman tweeted.

Sheriff Scott Israel during a news conference Thursday said video showed Peterson arriving at the west side of the high school where the shooting took place. Peterson, Israel said, took up a position but “never went in.”

Peterson, according to the sheriff, “was absolutely on campus through this entire event.” The deputy was armed and in uniform during the shooting, but never entered the building despite “clearly” knowing a shooting was happening, Israel said.

The sheriff said he believes Peterson remained outside the building for roughly four minutes, while the shooting in total lasted around six minutes. Israel said the officer never fired his weapon.

The sheriff told reporters he’s “devastated. Sick to my stomach. There are no words.”

……The sheriff said that he suspended Peterson without pay pending an internal investigation, but the officer resigned and retired.

In February 2016, the sheriff’s office received a call from someone who was concerned that Cruz “planned to shoot up the school.” That information was forwarded to the Stoneman Douglas resource officer.

I have words: It’s bad enough when a little deranged fuckstick decided to attack a school full of kids, and it’s worse when a law enforcement officer, who is armed and trained to deal with this shit, turns into a coward.

Oh, and this is interesting:

Peterson is mentioned as part of a 2016 social services agency investigation into Nikolas Cruz, the 19-year-old identified by police as the gunman. According to a Florida Department of Children and Families report detailing that investigation, Peterson was approached by investigators and “refused to share any information . . . regarding [an] incident that took place with” the teenager.

He should be publicly shamed and run out of town.  Hundreds of other law enforcement officers have to shoot it out with thugs every day of the week.  If he couldn’t handle it, he should have never worn the uniform.