How Soviet of them. 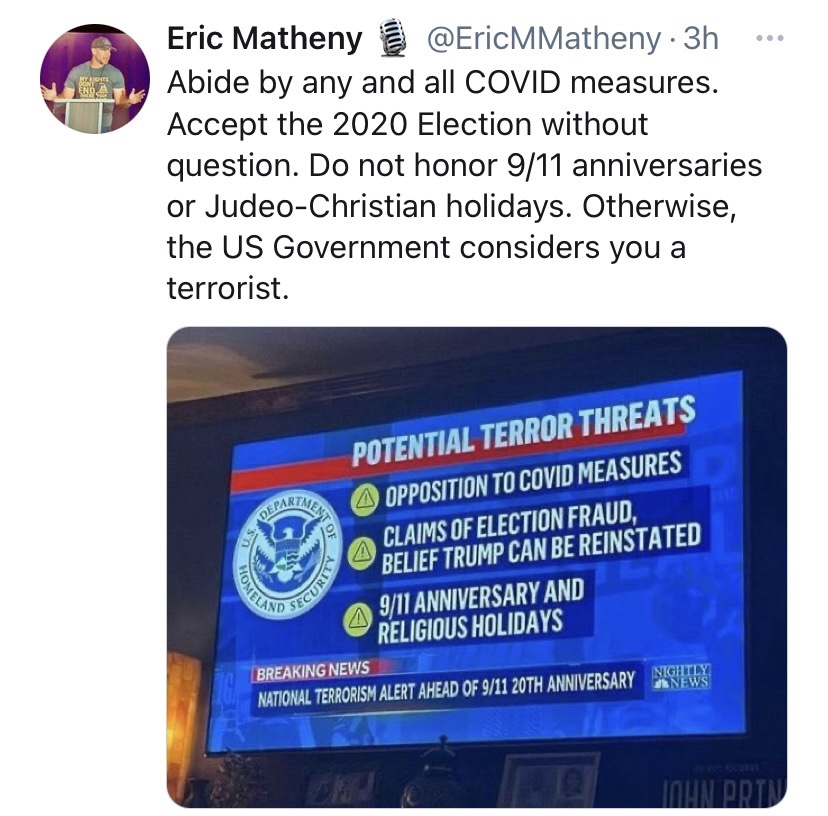 An absolutely sickening and disturbing turn of events as the Department of Homeland Security is now labeling those that do not agree with Covid restrictions as domestic terrorists.

That’s right, the Department of Homeland Security now says if you are “Opposition to Covid Measures” you are now a potential terror threat.

They also said if you echo sentiments and “Claims of Election Fraud, Belief Trump can be reinstated.” You are also a potential terror threat to America.

You can’t make up this level of insanity, but this is what tyrants do America.

“The Homeland continues to face a diverse and challenging threat environment leading up to and following the 20th Anniversary of the September 11, 2001 attacks as well religious holidays we assess could serve as a catalyst for acts of targeted violence,” the bulletin says. “These threats include those posed by domestic terrorists, individuals and groups engaged in grievance-based violence, and those inspired or motivated by foreign terrorists and other malign foreign influences.”

The threats are “exacerbated by impacts of the ongoing global pandemic, including grievances over public health safety measures and perceived government restrictions,” DHS said.

Friday’s advisory, like one they issued in May, warns of a threat of racially or ethnically motivated violent extremists that sometimes target houses of worship. Several Jewish holidays fall in September, including Rosh Hashanah and Yom Kippur. However it’s not forget its liberal groups who’ve been attacking and targeting Jewish Americans, not conservatives. The mainstream media and DHS simply left off those facts for those at home.

“These extremists may seek to exploit the emergence of COVID-19 variants by viewing the potential re-establishment of public health restrictions across the United States as a rationale to conduct attacks. Pandemic-related stressors have contributed to increased societal strains and tensions, driving several plots by domestic violent extremists, and they may contribute to more violence this year,” the bulletin says.

Of course, the real domestic terrorists, Antifa and BLM, are excluded from the DHS threat assessments.

The Obama regime did the same thing.  During his regime, Janet Napolitano developed an Enemies List (AKA: Homeland Security Department document entitled “Rightwing Extremism: Current Economic and Political Environment Fueling Resurgence in Radicalization and Recruitment”) which contained a section titled, “Disgruntled Military Veterans”.  She also added a DHS study that outlined “Hot Spots of Terrorism and Other Crimes in the United States”, that did not include the muslim terrorist threat in the country.  It did, however, name the following people as threats:

In contrast, Biden’s regime and his media tools ignore the Antifa and BLM violence they foster, encourage, and refuse to condemn.

The Dems have created a system of bullying and persecution of political opponents.

Biden has a ‘snitch line’ to turn in friends and relatives who object to government autocracy.

The real threat to this country are the Dems, their leftwing media tools, their rampaging antifa/BLM mobs, and weaponized government agencies that want to transform America into a police state.