The Justice Department on Thursday moved to drop its case against former National Security Adviser Michael Flynn, in a stunning development that comes after internal memos were released raising serious questions about the nature of the investigation that led to Flynn’s late 2017 guilty plea of lying to the FBI.

The announcement came in a court filing “after a considered review of all the facts and circumstances of this case, including newly discovered and disclosed information,” as the department put it. DOJ officials said they concluded that Flynn’s interview by the FBI was “untethered to, and unjustified by, the FBI’s counterintelligence investigation into Mr. Flynn” and that the interview was “conducted without any legitimate investigative basis.”

The 05 January, 2017 meeting in which Sally Yates said she learned of the Flynn-Kislyak call from Obama himself. Susan Rice and VP Joe Biden were also in that meeting.

……Earlier Thursday, the top prosecutor on the case, Brandon Van Grack, abruptly withdrew from the case, without explanation, in a brief filing with the court.

……Documents unsealed a week ago by the Justice Department revealed agents discussed their motivations for interviewing him in the Russia probe – questioning whether they wanted to “get him to lie” so he’d be fired or prosecuted, or get him to admit wrongdoing. Flynn allies howled over the revelations, arguing that he essentially had been set up in a perjury trap. In that interview, Flynn did not admit wrongdoing and instead was accused of lying about his contacts with the then-Russian ambassador – to which he pleaded guilty.

The latest DOJ filing noted Flynn’s false statement plea pertained to a crime that required a statement “to be not simply false, but ‘materially’ false with respect to a matter under investigation.” The filing showed that the government “is not persuaded that the January 24, 2017 interview was conducted with a legitimate investigative basis and therefore does not believe Mr. Flynn’s statements were material even if untrue.”

McCabe later said the interview was “very odd” because “it seemed like [Flynn] was telling the truth” to the two agents who interviewed him. Flynn, the interviewing agents told McCabe, “had a very good recollection of events, which he related chronologically and lucidly,” did not appear to be “nervous or sweating,” and did not look “side to side” — all of which would have been “behavioral signs of deception.”

……A Washington Post article published one day before Flynn’s White House interview with the agents, citing FBI sources, publicly revealed that the FBI had wiretapped Flynn’s calls with Kislyak and cleared him of any criminal conduct. It was unclear who leaked that information to the Post.

This is a memo about the 05 January 2017 meeting in which Sally Yates said she learned of the Flynn-Kislyak call from Obama himself. Susan Rice and VP Joe Biden were also in that meeting. 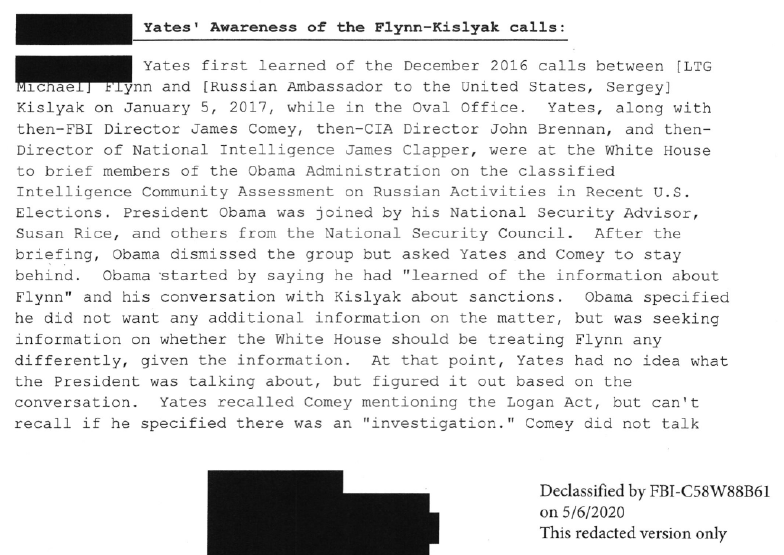 Obama’s unexpectedly intimate knowledge of the details of Flynn’s calls, which the FBI said at the time were not criminal in nature, raised eyebrows because of his own history with Flynn — and because top FBI officials secretly discussed whether their goal was to ‘get [Flynn] fired’ when they interviewed him in the White House on January 24, 2017.

This whole “Russian collusion” hoax has Obama’s fingerprints all over it.

A timeline of Obama’s targeting of Michael Flynn at The Federalist.

The Russians gave $35 million to a company with John Podesta on the board.

A fake dossier paid for by one political party and its candidate was used by the government to spy on that candidate’s opponent.

The Obama regime’s FISA abuse in order to get permission to wiretap Trump.

Comey, who is an unscrupulous douchebag, was part and parcel of the conspiracy to undermine the election and overthrow a duly elected president through false allegations and sedition. He also leaked classified information when it suited his purpose and lied to the FISA court.

Hillary’s Uranium One deal with the Russians netted her $145 million to her corrupt Clinton Foundation.

Mueller is as crooked as a dog’s hind leg. He eagerly participated in a wild goose chase of phantom crimes. He should be investigated, as well.

For three years, a Dem cabal conspired to oust a duly elected President on baseless grounds.