Was the Federal Bureau of Investigation justified in searching Donald Trump’s residence at Mar-a-Lago? The judge who issued the warrant for Mar-a-Lago has signaled that he is likely to release a redacted version of the affidavit supporting it. But the warrant itself suggests the answer is likely no—the FBI had no legally valid cause for the raid.

The warrant authorized the FBI to seize “all physical documents and records constituting evidence, contraband, fruits of crime, or other items illegally possessed in violation of 18 U.S.C. §§793, 2071, or 1519” (emphasis added). These three criminal statutes all address the possession and handling of materials that contain national-security information, public records or material relevant to an investigation or other matters properly before a federal agency or the courts.

The materials to be seized included “any government and/or Presidential Records created between January 20, 2017, and January 20, 2021”—i.e., during Mr. Trump’s term of office. Virtually all the materials at Mar-a-Lago are likely to fall within this category. Federal law gives Mr. Trump a right of access to them. His possession of them is entirely consistent with that right, and therefore lawful, regardless of the statutes the FBI cites in its warrant.

Those statutes are general in their text and application. But Mr. Trump’s documents are covered by a specific statute, the Presidential Records Act of 1978. It has long been the Supreme Court position, as stated in Morton v. Mancari (1974), that “where there is no clear intention otherwise, a specific statute will not be controlled or nullified by a general one, regardless of the priority of enactment.” The former president’s rights under the PRA trump any application of the laws the FBI warrant cites.

The PRA dramatically changed the rules regarding ownership and treatment of presidential documents. Presidents from George Washington through Jimmy Carter treated their White House papers as their personal property, and neither Congress nor the courts disputed that. In Nixon v. U.S. (1992), the U.S. Circuit Court of Appeals for the District of Columbia held that Richard Nixon had a right to compensation for his presidential papers, which the government had retained under the Presidential Recordings and Materials Preservation Act of 1974 (which applied only to him). “Custom and usage evidences the kind of mutually explicit understandings that are encompassed within the constitutional notion of ‘property’ protected by the Fifth Amendment,” the judges declared.

The PRA became effective in 1981, at the start of Ronald Reagan’s presidency. It established a unique statutory scheme, balancing the needs of the government, former presidents and history. The law declares presidential records to be public property and provides that “the Archivist of the United States shall assume responsibility for the custody, control, and preservation of, and access to, the Presidential records.”

The PRA lays out detailed requirements for how the archivist is to administer the records, handle privilege claims, make the records public, and impose restrictions on access. Notably, it doesn’t address the process by which a former president’s records are physically to be turned over to the archivist, or set any deadline, leaving this matter to be negotiated between the archivist and the former president.

The PRA explicitly guarantees a former president continuing access to his papers. Those papers must ultimately be made public, but in the meantime—unlike with all other government documents, which are available 24/7 to currently serving executive-branch officials—the PRA establishes restrictions on access to a former president’s records, including a five-year restriction on access applicable to everyone (including the sitting president, absent a showing of need), which can be extended until the records have been properly reviewed and processed. Before leaving office, a president can restrict access to certain materials for up to 12 years.

The only exceptions are for National Archives personnel working on the materials, judicial process, the incumbent president and Congress (in cases of established need) and the former president himself. PRA section 2205(3) specifically commands that “the Presidential records of a former President shall be available to such former President or the former President’s designated representative,” regardless of any of these restrictions.

Nothing in the PRA suggests that the former president’s physical custody of his records can be considered unlawful under the statutes on which the Mar-a-Lago warrant is based. Yet the statute’s text makes clear that Congress considered how certain criminal-law provisions would interact with the PRA: It provides that the archivist is not to make materials available to the former president’s designated representative “if that individual has been convicted of a crime relating to the review, retention, removal, or destruction of records of the Archives.”

Nothing is said about the former president himself, but applying these general criminal statutes to him based on his mere possession of records would vitiate the entire carefully balanced PRA statutory scheme. Thus if the Justice Department’s sole complaint is that Mr. Trump had in his possession presidential records he took with him from the White House, he should be in the clear, even if some of those records are classified.

In making a former president’s records available to him, the PRA doesn’t distinguish between materials that are and aren’t classified. That was a deliberate choice by Congress, as the existence of highly classified materials at the White House was a given long before 1978, and the statute specifically contemplates that classified materials will be present—making this a basis on which a president can impose a 12-year moratorium on public access.

The government obviously has an important interest in how classified materials are kept, whether or not they are presidential records. In this case, it appears that the FBI was initially satisfied with the installation of an additional lock on the relevant Mar-a-Lago storage room. If that was insufficient, and Mr. Trump refused to cooperate, the bureau could and should have sought a less intrusive judicial remedy than a search warrant—a restraining order allowing the materials to be moved to a location with the proper storage facilities, but also ensuring Mr. Trump continuing access. Surely that’s what the government would have done if any other former president were involved.

The FBI’s dog and pony show involved breaking into a safe which was an authorized SCIF (Sensitive Compartmented Information Facility) and displaying the documents on the floor as if that’s where they were found. He is allowed to have classified documents as long as they are secured and stored appropriately; they were. And he has the authority to declassify the documents he possessed.

Over 50 “classified” folders they confiscated were empty.

Remember Peter Stzrok?  He was part of the Deep State effort to undermine the 2016 election and overthrow a duly elected president.

He just got pummeled on social media for suggesting that the FBI “had no choice but to reluctantly investigate Trump”. 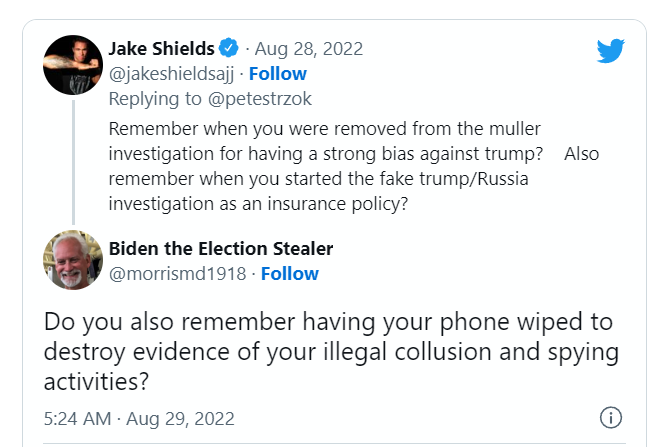 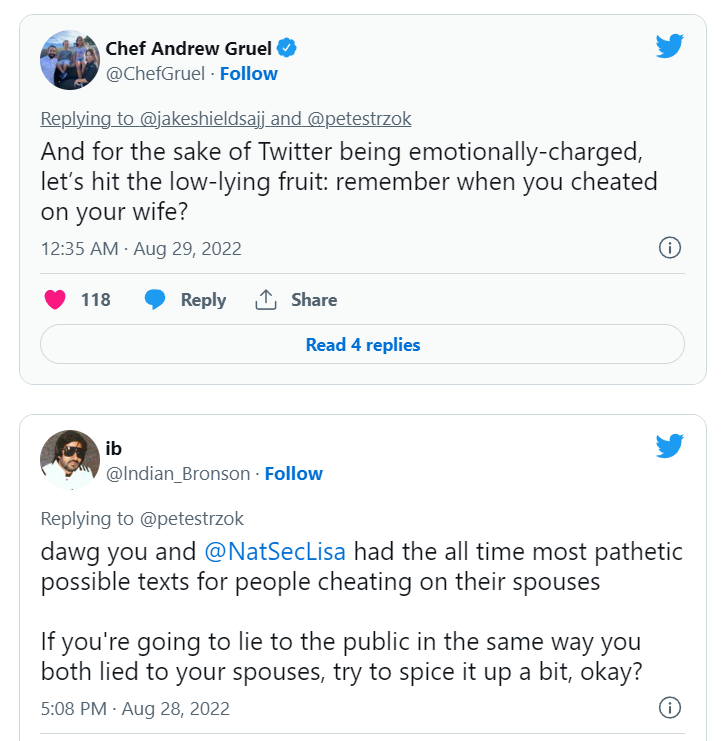 The raid on Mar-a-Lago is a prime example of selective politicized targeting. It’s simply a tactic to prevent President Trump from running for office in 2024.  Don’t think for one second that if they had a basket full of bombshells that they wouldn’t be holding daily press conferences, squeezing all the notoriety out of it they could. It’s political theater.

For Those Who Doubt the Deep State Collusion in the 2016 Election: Treasury Leaker had ‘Co-Conspirator’ in Plot Against Trump Officials