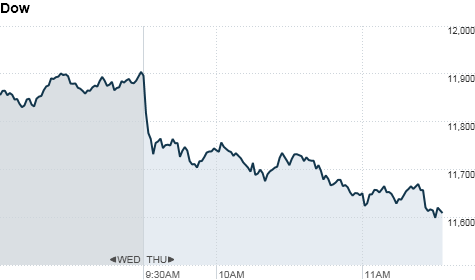 Stocks plunged sharply Thursday, with the Dow down more than 500 points, in its worst one-day drop since December 2008.

All three major averages tumbled into negative territory for the year as investors were rattled over an intensifying global economic slowdown and ahead of the widely-followed monthly unemployment report.

The major indexes are firmly in negative territory for the year. In addition, all three averages fell into “correction territory,” defined by a drop of 10 percent from its peak from its intraday high in Apr. 29.

The CBOE Volatility Index, widely considered the best gauge of fear in the market, surged more than 35 percent. The last time the VIX closed this high was on July 1, 2010.

CHAPEL HILL, N.C. (MarketWatch) — The stock market is poised today to do something it has not done in over 33 years: Decline for nine straight sessions.

The last time the Dow Jones Industrial Average did that, in fact, was Feb. 22, 1978, when Jimmy Carter was president and the country was struggling to come to grips with a period of anemic economic growth and high inflation.

Isn’t it comforting to know that we’ve made such progress over the last three decades?