The Wall Street Journal, Washington Post and others reported, based on unnamed sources, that the top executives of Twitter TWTR were fired and escorted from the building, including Chief Executive Parag Agrawal, Chief Financial Officer Ned Segal and Vijaya Gadde, head of legal policy, trust and Musk himself is expected to assume the role of interim CEO, though in the longer term may appoint someone else, Bloomberg reported early Friday, citing unnamed sources. Twitter did not respond to a request by the publication for comment.

……In  a tweet late Thursday night, Musk said only: “the bird is freed.”

Musk’s letter to advertisers spells out his intent: 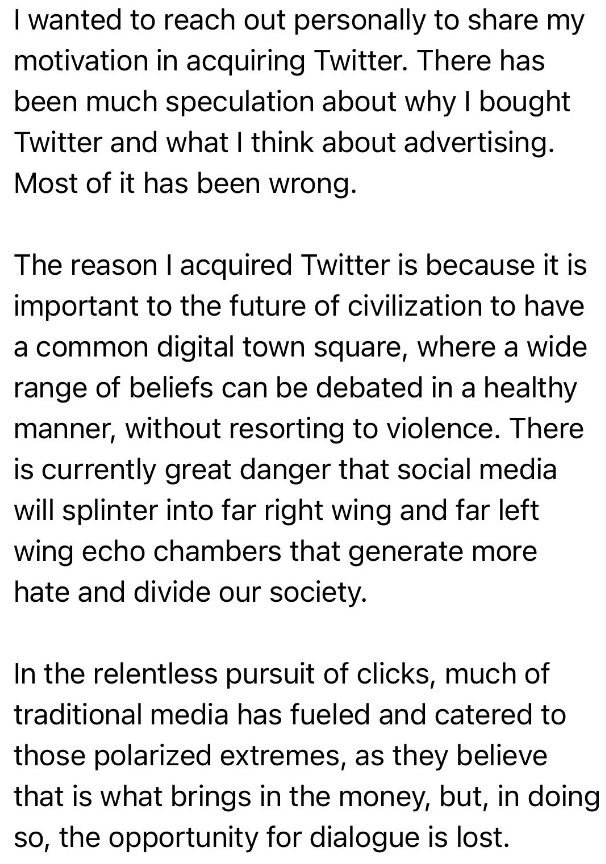 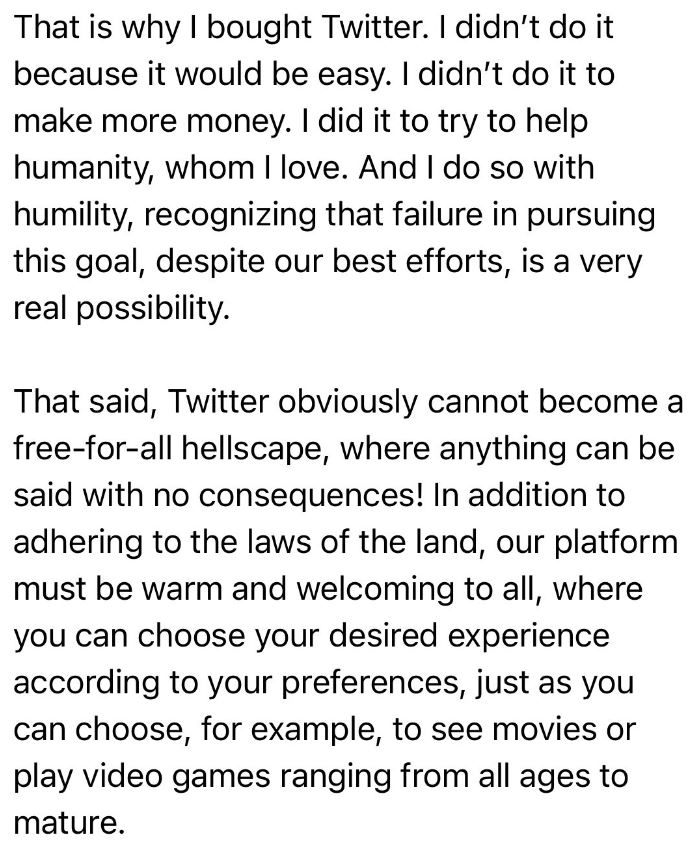 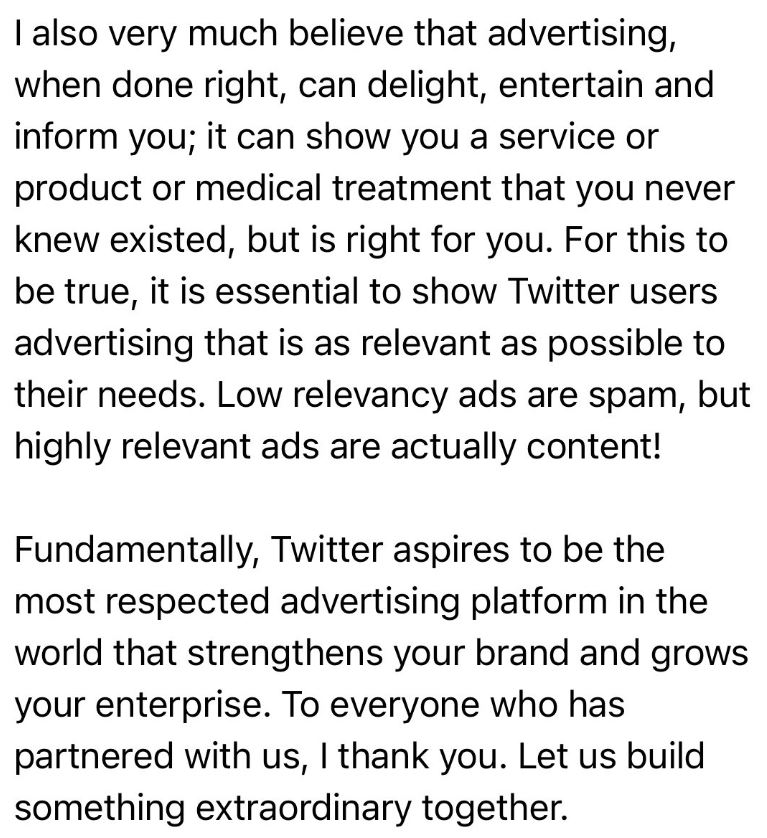 Agrawal is a total douche.  He made clear his position on free speech, saying that Twitter’s role is “not to be bound by the First Amendment.” Oh, and he also expressed his pro-Islamofascist doctrine when he tweeted:

Icing on the cake: Vijaya Gadde is the shit stain who pushed the effort to ban President Trump from the platform and bury the Hunter Biden laptop story.  Buh bye.

Some pranksters took advantage of the lib media:

At this point, enter Deirdre Bosa, the CNBC reporter whose tweets I’d like to save in my theoretical time capsule.

You know that old reporter’s adage, “Never let the facts get in the way of a good story”? On Friday, Bosa took that joke seriously and live-tweeted a group of poor Twitter  data engineers who had been laid off during the “#TwitterTakeover” without confirming that they were, you know, actual Twitter employees.

This is Bosa at 10:09 Pacific Time outside Twitter headquarters in San Francisco: “It’s happening Entire team of data engineers let go. These are two of them,” she tweeted, along with a photo of two men with cardboard boxes. 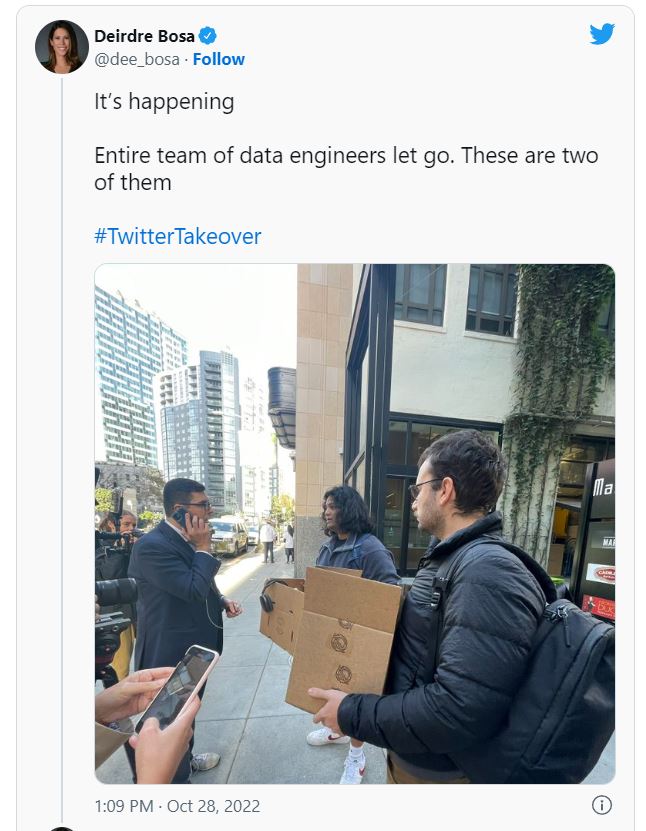 “They are visibly shaken. Daniel tells us he owns a Tesla and doesn’t know how he’s going to make payments,” Bosa tweeted four minutes later.

You may have guessed how this is going to end. Here’s Bosa at 11:00 a.m. sharp, throwing a little cold water on the initial story: 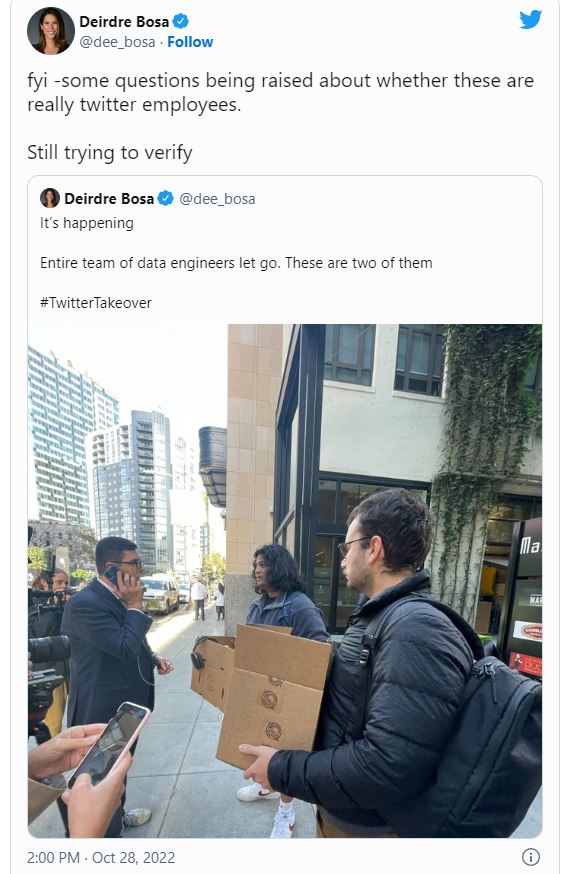 Verifying whether these were Twitter employees might have been a good idea before that first tweet. That’s especially true when one of the employees gave the too-perfect sob story about missing Tesla payments. Or when the other had another too-perfect moment when he held up a copy of Michelle Obama’s autobiography. Or when the first told a reporter he has to “touch base with my husband and wife.”

Or, perhaps Bosa could have looked up the names of the two data engineers supposedly laid off. They identified themselves as “Daniel Johnson” and “Rahul Ligma,” according to the New York Post. “Ligma,” for the uninitiated, is a hoax disease that’s become an internet meme for reasons that aren’t family-friendly and which I’ll leave for the reader to discover, should they wish to.

Suffice it to say that googling Mr. Ligma’s name would have led Bosa to realize she was being trolled right off the bat — and led to some amused reactions on Twitter, including from Elon Musk himself: 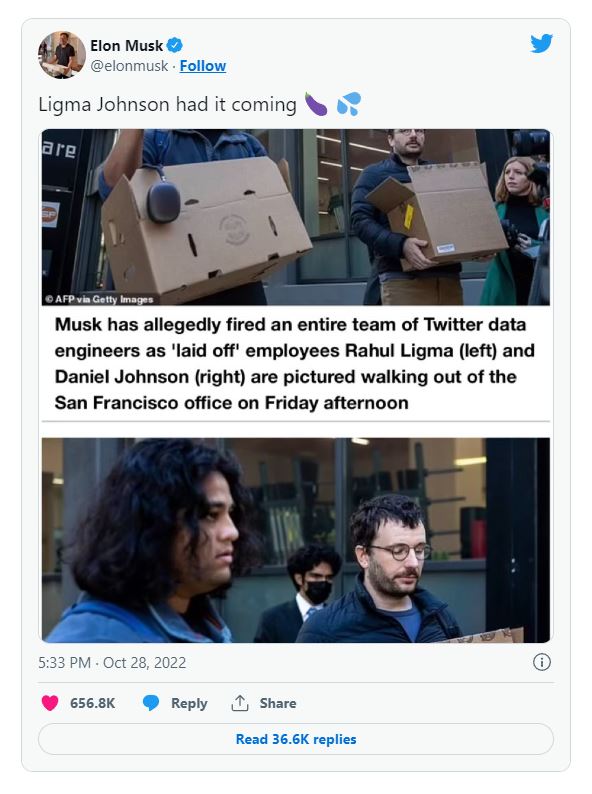 Just to be clear, Bosa wasn’t the only reporter to take the bait — but she was the one to bite hardest, and the only one who tweeted her abject failure to follow journalistic best practices in real time.

An hour after her initial tweet, Bosa said that “confusion reigns outside twitter HQ are people being let go? Are they trolling the media? … unfortunately corp comms isn’t returning calls.”

They were, indeed, revealed as pranksters.

The entitled snowflakes at the company are wetting themselves over the new boss. They sent him a letter with a list of demands full of indignant bullshit over “intimidation”, “respect”, and “safety”, all in reference to what they claim is their entitled sacred positions.  He has no right to run the company as he sees fit, especially after Dorsey and Agrawal created an exclusive enclave for intellectually and morally bankrupt proglodytes.

Musk has a simple, direct approach to work. This is how he handled Tesla employees who didn’t want to return to the office after working remote for the duration of the needless covid lockdown:

CEO Elon Musk informed his Tesla employees on Tuesday that they need to be back in the main office working at least 40 hours a week or they can head for greener pastures and “pretend to work somewhere else.”

Two blunt emails were leaked on Twitter with the first one putting employees on notice: “Anyone who wishes to do remote work must be in the office for a minimum (and I mean *minimum*) of 40 hours per week or depart Tesla. This is less than we ask of factory workers.”

“If there are particularly exceptional contributors for whom this is impossible, I will review and approve those exceptions directly,” Musk reportedly noted. “Moreover, the ‘office’ must be a main Tesla office, not a remote branch office unrelated to the job duties.”

One Twitter user asked Musk to respond to Tesla employees who consider working in-person to be an “antiquated concept.”

The billionaire tersely replied, “They should pretend to work somewhere else.”

“Everyone at Tesla is required to spend a minimum of 40 hours in the office per week. Moreover, the office must be where your actual colleagues are located, not some remote pseudo office. If you don’t show up, we will assume you have resigned.,” Musk reportedly wrote in a second email, according to electrek.

The Left is having grand mal seizures. The virtue signaling assclowns are having a stompy feet temper tantrum now that they’ve lost control over a Big Tech site that used ‘algorithms’ and a dedicated censorship department to ban conservatives and anyone else who questioned the covid lockdowns, the vax, and suppression of the Biden laptop.  Reporter and author Alex Berenson was banned after the Biden regime contacted Twitter execs and demanded he be removed.

Jonathan Turley points out that the Left is no advocate of free speech:

……Led by Joe Biden, Democratic leaders and media figures have demanded corporate censorship and even state censorship to curtail opposing views on issues ranging from climate change to election integrity to public health to gender identity. The Washington Post’s Max Boot, for example, declared “For democracy to survive, we need more content moderation, not less.”

Many of those same figures are now apoplectic at the thought that others may be able to express dissenting views on subjects ranging from climate change to election regulations to gender identity.

Journalist Molly Jong-Fast asked, “Can someone make a new Twitter or is this a very stupid question?” In other words, a journalist wants to recreate a social media platform where others can be routinely silenced. The answer is simple: Facebook . . .  and virtually every other social media platform.

The freak out from the Musk-phobic was triggered by the prospect of a single social media company offering greater free speech protections. Just one.  However, they know that the effort to control political and social speech will be lost if people have an alternative.  These companies are only able to sell censorship because they have largely been able to bar free speech competitors. Now there may be an alternative.

The panic over free speech breaking out on a single social media site is shared by journalism and law professors. CUNY journalism professor Jeff Jarvis wrote “The sun is dark” and “This is an emergency! Twitter is to be taken over by the evil Sith lord.” He previously wrote, after news of the likely purchase by Musk, that “Today on Twitter feels like the last evening in a Berlin nightclub at the twilight of Weimar Germany.”

He is not alone.

Columbia Journalism Dean and New Yorker writer Steve Coll decried how the First Amendment right to freedom of speech was being “weaponized” to protect disinformation. In an interview with The Stanford Daily, Stanford journalism professor, Ted Glasser, insisted that journalism needed to “free itself from this notion of objectivity to develop a sense of social justice.” He rejected the notion that the journalism is based on objectivity and said that he views “journalists as activists because journalism at its best — and indeed history at its best — is all about morality.”  Thus, “Journalists need to be overt and candid advocates for social justice, and it’s hard to do that under the constraints of objectivity.”

Coll and his ilk want to weaponize journalism to squash the 1st Amendment. The irony is lost on idiots like that.

Likewise, an article published in The Atlantic by Harvard law professor Jack Goldsmith and University of Arizona law professor Andrew Keane Woods called for Chinese-style censorship of the internet, stating that “in the great debate of the past two decades about freedom versus control of the network, China was largely right and the United States was largely wrong.”

Goldsmith and Woods would have to embrace the whole package of ChiCom totalitarianism in order to realize their wet dream of “Chinese-style censorship”.  This is so fucking typical of leftwing elites. They support bloody communist dictators from the safety and security of a free country. They would never subject themselves to the political systems they advocate. Too bad they’re not trapped in Shanghai right now.

Reactions to the leftwing meltdown: 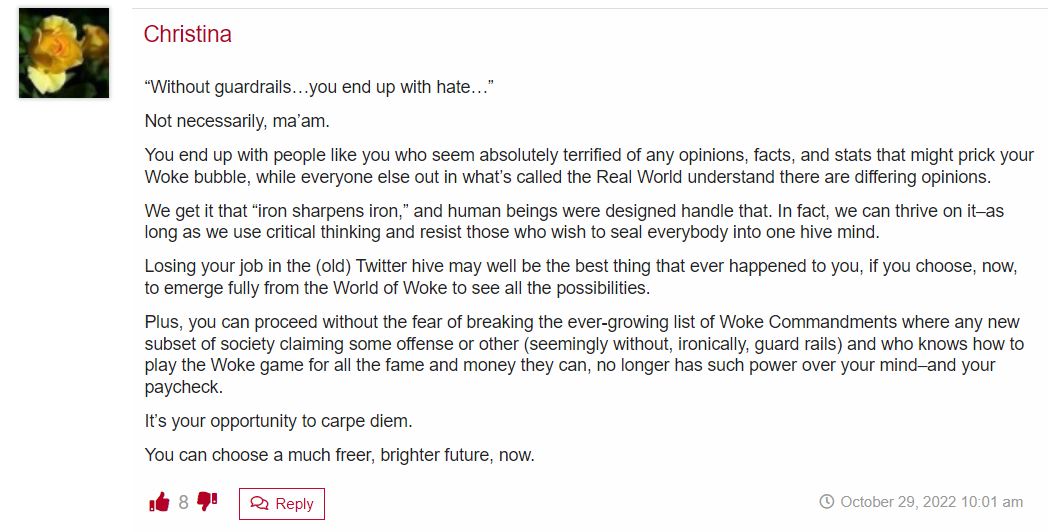 This is “a day in the life of a Twitter employee.” No wonder @elonmusk is firing 75% of them pic.twitter.com/cAHOuni765

No wonder they are pissed at being fired. Not only did they lose control over free speech, they won’t be able to lounge all day in a private club.

Musk stated that his goal is to promote free speech, allow raucous controversial debate, and autonomous expression in a common digital town square.  We’ll see how that works out.