The Feds and the Pentagon funneled $39 million to EcoHealth Alliance, a group that funded the coronavirus reasearch in Wuhan. Just fucking great.  Our government helped the ChiComs develop a bioweapon.

And as for that vaccine, Dr. Peter McCullough discusses the dangers of the novel COVID vaccine and its rollout. This is a product that had minimal testing but is being pushed on the masses.

The leaked emails affirm what we already know about the asshole. He’s incompetent, a liar, and a tool for the ChiComs. He helped them unleash a bioweapon.

And here it is folks… the email (perhaps one of many) where Dr. Fauci makes the terrible no-good lockdown-prompting error of confusing IFR with CFR. Here he puts a VERY HIGH COVID CFR with a low influenza IFR. We explain it all here:https://t.co/9G8ojwpGRj pic.twitter.com/WSMMzzmhvT

Fox News host Laura Ingraham opened Wednesday’s “Ingraham Angle” wondering if Dr. Anthony Fauci’s days are numbered as NAIAD director after a trove of emails was released showing that he was repeatedly warned that COVID could have been engineered in a lab, something he publicly denied much of last year.

INGRAHAM: These emails should mark the end of the road for Fauci. He allowed taxpayer dollars to fund the Chinese lab that may have created the virus that crippled the world and killed millions. And as these emails show, he and his cronies launched a desperate campaign to cover that up.  Was it because they were worried about their own reputation? As for the media’s role in the coverup, they didn’t just protect Fauci, they deified him in their obsession to drive Trump from office and that all continued today.

We know that lots of people inside our government, big tech, and media were motivated not by science or health but they were motivated by what was going to help defeat Trump. This is why conservatives don’t trust the experts and the globalists they serve. Trump didn’t destroy their credibility – they did it to themselves.

He knew the virus originated in Wuhan, but he helped China spin the narrative about a wet market. He didn’t want anything to interfere with the collaboration. This ChCom official apologized for the way he had been quoted in Science Magazine.

To which Fauci replied:

Too bad he didn’t feel the same way about scientists and physicians who knew the virus was a politicized, fear-based narrative designed to target President Trump and abuse power.

The utter fraudulence of Tony Fauci is obvious now and it’s widely acknowledged, but it was not always obvious. In March of last year, we interviewed Fauci on this show. We treated him with respect. We took his answer seriously.

We’re Americans, so we assumed the man in charge of protecting the U.S. from COVID must be rational and impressive. We also assumed he must be honest, but we were wrong. It soon became clear that Tony Fauci was just another sleazy Federal bureaucrat, deeply political, and often dishonest.

More shocking than that, we then learned that Fauci himself was implicated in the very pandemic he had been charged with fighting. Fauci supported the grotesque and dangerous experiments that appeared to have made COVID possible.

We came to these conclusions incrementally, spurred by evidence that accumulated over the course of a year. Tonight, we have the mother lode. Thanks to a Freedom of Information request from BuzzFeed, we have thousands of e-mails to and from Anthony Fauci. They go back to the early winter of 2020.

Collectively, they show that from the beginning, Tony Fauci was worried that the public might conclude COVID had originated at the Wuhan Institute of Virology. Now, why would Tony Fauci be concerned that Americans would conclude that? Possibly because Tony Fauci knew perfectly well that he had funded gain-of-function experiments at that very same laboratory.

E-mails prove that Fauci lied about this under oath. Consider this exchange, which began the evening of January 31st, 2020. It was a Friday just before midnight. The first e-mail came from an immunologist called, Kristian Andersen, who works at the Scripps Research Institute in La Jolla, California.

Andersen warned Fauci that COVID appeared to have been possibly manipulated in a laboratory, quote, “The unusual features of the virus make up a really small part of the genome, less than 0.1 percent. So one has to look really closely at all the sequences to see that some of the features potentially look engineered.”

The next day, on February 1st, Tony Fauci wrote back, “Thanks, Kristian. Talk soon on the call.” Fauci then sent an urgent e-mail to his deputy, a man called Hugh Auchincloss, the subject of that e-mail in all caps was “Important.” “Hugh, it is essential that we speak this AM. Keep your cell phone on. Read this paper as well as the e-mail that I will forward. You will have tasks today that must be done.”

Attached to that email was a document it was entitled, quote, “Baric, Shi et al, nature medicine, SARS, gain-of-function.pdf.” Now the Baric in the attachment referred to Ralph Baric, a virologist based in the U.S. who collaborated with the Wuhan Institute for Virology.

Baric worked with a woman called Dr. Shi Zhengli known as the bat lady because she manipulates coronaviruses that infect bats. She was the Shi in the attachment.

Now keep in mind that during the questioning from Senator Rand Paul of Kentucky fairly recently, Tony Fauci denied that this same Ralph Baric had conducted gain-of-function research. Again, this is the Ralph Baric in Fauci’s attachment, which was entitled “Baric, Shi et al SARS gain-of- function.pdf.” And yet under oath before the United States Congress, Fauci denied this.

Of course, the leftwing media hacks did their part condemning intelligent discourse and dissent. They attacked anyone who disagreed. Now that President Trump is no longer in office, the turds have changed their tune: 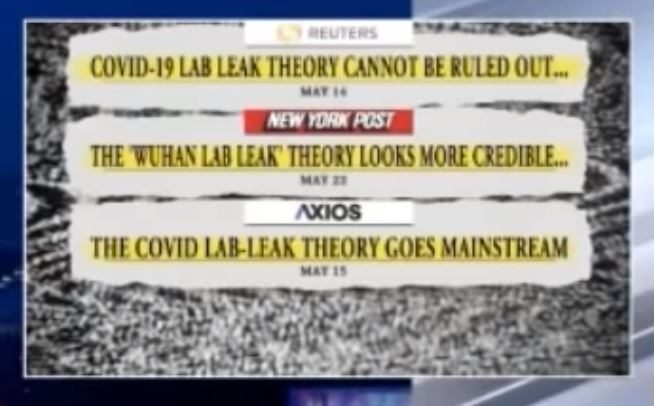 This motherfucker was willing to risk an outbreak for the sake of a ChiCom lab experiment. 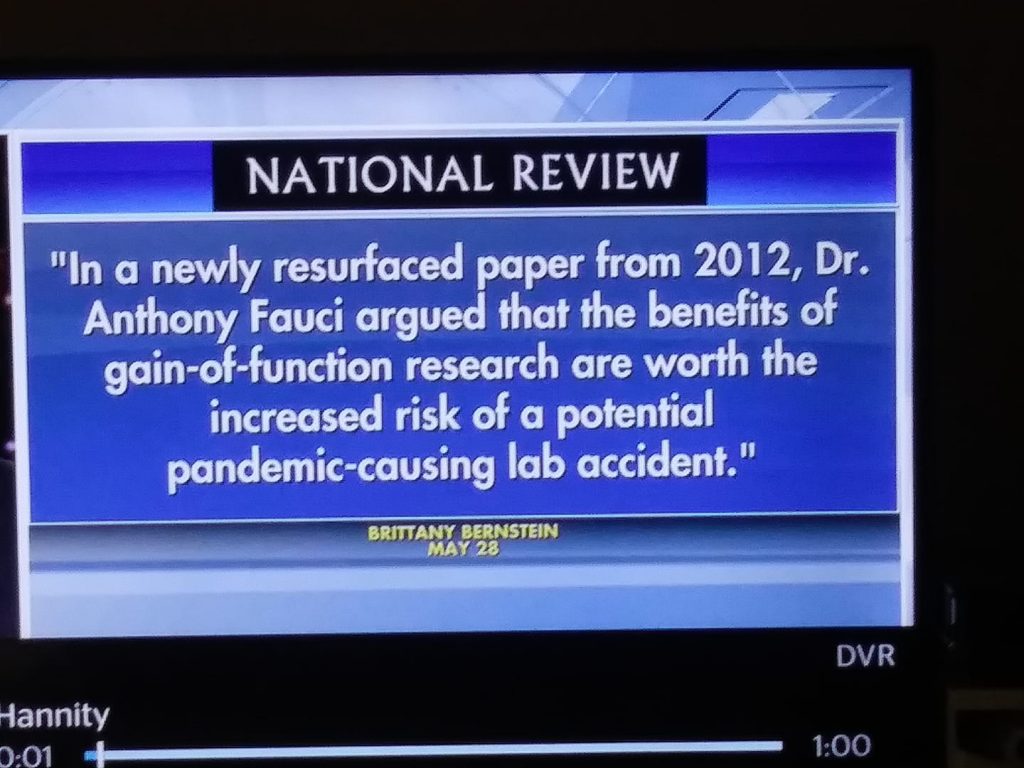 But they’re still covering for Fauci, who rushed to appear on MSNBC for a slobberfest:

Fauci ran to the friendly left-wing media for his first interview since the email dump.

“The true mark of someone is if they look good even when their personal emails come out, so you pass the test very few of us would pass,” Nicolle Wallace said.

Fauci has some serious ethical issues. Fauci’s National Institute of Allergy and Infectious Diseases also spent over $400,000 on Frankenstein experiments grafting aborted fetal scalps onto mice and rats. He also made the fatuous claim that HIV/AIDS would explode in the heterosexual population.

He knew masks were ineffective, but he used fear and control to feed paranoia. 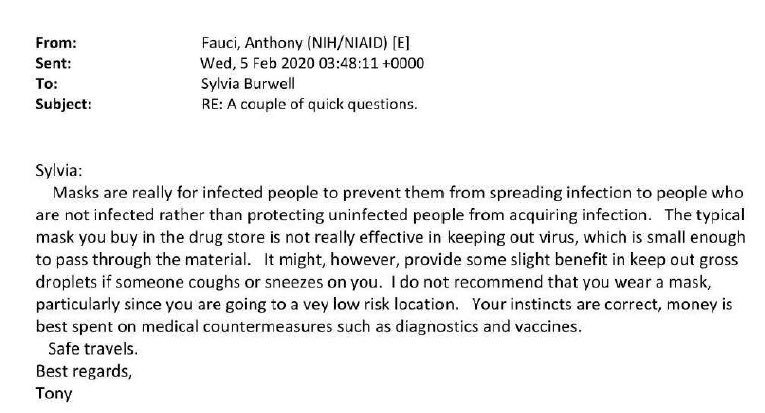 He knew the virus originated in Wuhan, but he helped China spin the narrative about a wet market.  He is involved with the ChiCom lab that genetically engineered coronaviruses so that they infect human beings as easily as possible, by funding the lab and the gain of function with American tax dollars.

Fauci was thanked for denying the virus origin by the same crapweasel who bankrolled the coronavirus experiments.

This country was shut down over a virus with a 99% recovery rate. The people at greatest risk were those with pre-existing medical conditions and the elderly.  Healthy people with good immune systems who caught the virus regained their health after a week or two. Like yours truly.  The draconian lockdowns were devastating. 26 million Americans became unemployed.  People lost their jobs, homes, livelihoods, and businesses because of this induced panic. The economic impact will take years to overcome.

The coronavirus will come and go. But the government will never forget how easy it was to take control of your life; to control every event, restaurant, sports facility, classroom, church, and even if you are allowed to leave your house.

Fauci is the mouthpiece for government newspeak.  He keeps the fear meter pegged at full capacity.  He is the Biden regime’s Ministry of Truth against those who will not submit; a population of critical thinkers who don’t believe in fraud.  The Biden regime shut down the investigation into the Wuhan lab;  they did not want to admit the virus was a ChiCom concoction, thereby ruining the ‘blame Trump’ narrative.

The politicized COVIDIOCY  is not about public health and safety, it’s about power and control.

Time to throw that rat bastard in prison.