Fauci and the rest of those motherfuckers belong in prison.

This is the same fucking monster who wants to force a risky, unnecessary vax on you.

Creating a bioweapon in a Chinese Communist military lab and Frankenstein experiments where the scalps of aborted fetuses were grafted onto the heads of rats are just some of the hideous features on Fauci’s resume.

Answer to misdeeds?? That motherfucker should be subjected to the same cruelty he inflicted on those poor animals.

Social media users are calling for the arrest of Dr. Anthony Fauci and his removal as the nation’s top infectious disease expert after his agency was found to have used taxpayer funds to finance cruel experiments on dogs.

The hashtag #ArrestFauci was trending on Twitter over the weekend, amplifying the outrage over the experiments, including one which saw beagles trapped in cages so flies could eat them, and another where they were ‘debarked’ before being pumped with drugs and killed.

One of the most disturbing incidents funded by Fauci’s National Institutes of Allergies and Infectious Diseases involved $375,000 given to a Tunisian research lab.

There, puppies had their heads held in cages, before being left for sand flies to eat them alive for research purposes.

Distressing snaps showed the pups with their heads kept inside the muslin-type cages filled with the hungry insects.

Another procedure – which the NIH funded to the tune of $1.8m – saw 44 beagle puppies undergo a ‘cordectomy,’ which saw their vocal cords cut to stop them barking.

That experiment, which took place in Menlo Park, California, saw the dogs then pumped full of drugs, before being killed and dissected. 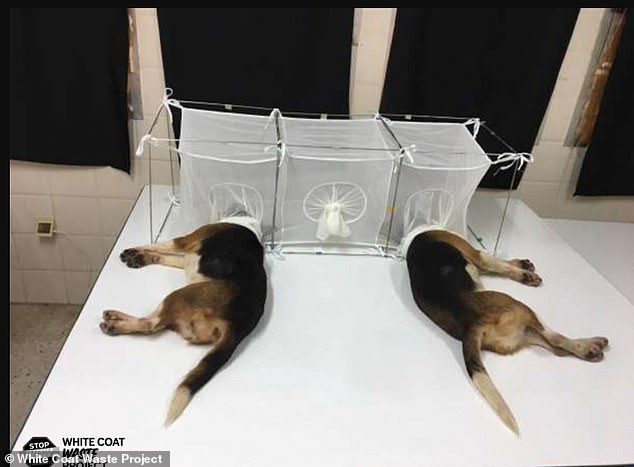 ……An official with the National Institutes of Health, the agency which oversees the NIAID headed by Fauci, admitted on Wednesday that American taxpayers funded gain of function research on bat coronaviruses in Wuhan, China.

The official acknowledged that EcoHealth Alliance, the US nonprofit that funneled NIH money to the Wuhan Institute of Virology, was not transparent about the work it was doing.

In testimony before Congress, Fauci and outgoing NIH Director Francis Collins denied that the agency funded gain of function research at Wuhan.

According to the Hill, the experiment transpired in a Tunisia, North Africa laboratory where as many as 44 beagle puppies endured the cruelty proscribed by a shitbag with a Joseph Mengele complex.

The NIH also conducted psychological torture experiments on primates; they destroyed parts of their brains to magnify fear.

Back in 2004, the New York Post and the New York Press published an article about the NIH’s lethal clinical drug experiments on children in the name of AIDs research:

In New York’s Washington Heights is a 4-story brick building called Incarnation Children’s Center (ICC). This former convent houses a revolving stable of children who’ve been removed from their own homes by the Agency for Child Services. These children are black, Hispanic and poor. Many of their mothers had a history of drug abuse and have died. Once taken into ICC, the children become subjects of drug trials sponsored by NIAID (National Institute of Allergies and Infectious Disease, a division of the NIH), NICHD (the National Institute of Child Health and Human Development) in conjunction with some of the world’s largest pharmaceutical companies – GlaxoSmithKline, Pfizer, Genentech, Chiron/Biocine and others.

The drugs being given to the children are toxic – they’re known to cause genetic mutation, organ failure, bone marrow death, bodily deformations, brain damage and fatal skin disorders. If the children refuse the drugs, they’re held down and have them force fed. If the children continue to resist, they’re taken to Columbia Presbyterian hospital where a surgeon puts a plastic tube through their abdominal wall into their stomachs. From then on, the drugs are injected directly into their intestines.

In 2003, two children, ages 6 and 12, had debilitating strokes due to drug toxicities. The 6-year-old went blind. They both died shortly after.  Another 14-year old died recently. An 8-year-old boy had two plastic surgeries to remove large, fatty, drug-induced lumps from his neck.

This isn’t science fiction. This is AIDS research. The children at ICC were born to mothers who tested HIV positive, or who themselves tested positive. However, neither parents nor children were told a crucial fact — HIV tests are extremely inaccurate.(1,2)  The HIV test cross-reacts with nearly seventy commonly-occurring conditions, giving false positive results. These conditions include common colds, herpes, hepatitis, tuberculosis, drug abuse, inoculations and most troublingly, current and prior pregnancy.(3,4,5) This is a double inaccuracy, because the factors that cause false positives in pregnant mothers can be passed to their children – who are given the same false diagnosis.

Most of us have never heard this before. It’s undoubtedly the biggest secret in medicine. However, it’s well known among HIV researchers that HIV tests are extremely inaccurate – but the researchers don’t tell the doctors, and they certainly don’t tell the children at ICC, who serve as test animals for the next generation of AIDS drugs. ICC is run by Columbia University’s Presbyterian Hospital in affiliation with Catholic Home Charities through the Archdiocese of New York.

An excerpt of Robert F. Kennedy, Jr.’s new book ‘The Real Anthony Fauci’ was released early this week. In it he details how Fauci also experimented on humans, including children.

“In 1965, my father kicked down the door of the Willowbrook State School on Staten Island, where pharmaceutical companies were conducting cruel and often-deadly vaccine experiments on incarcerated children.

Robert Kennedy declared Willowbrook a ‘snake pit’ and promoted legislation to close the institution and end the exploitation of children.”

The NIH is a cesspool of wasteful, bizarre, evil experiments.

It’s time to shut the NIH down and fire, arrest, and charge this ratfuck with treason and animal and child abuse.