Newly released internal emails reveal that the National School Boards Association coordinated with the White House and the Department of Justice before sending President Biden the notorious letter that compared concerned parents to domestic terrorists. Emails provided to Fox News show that NSBA had coordinated with the White House for weeks beforehand.

Viola Garcia, the NSBA president whom the Department of Education later named to a federal board, sent a memo to NSBA members on Oct. 11 (but dated Oct. 12), providing a timeline of the NSBA’s interaction with the White House ahead of the letter to Biden, which the NSBA sent on Sept. 29.

Five days later, on Oct. 4, the DOJ issued a memo directing law enforcement to investigate threats to school boards. On Oct. 22, the NSBA issued an apology for the letter.

Standing up to corrupt school boards and objecting to the racist indoctrination of kids gets you labeled a “domestic terrorist”. 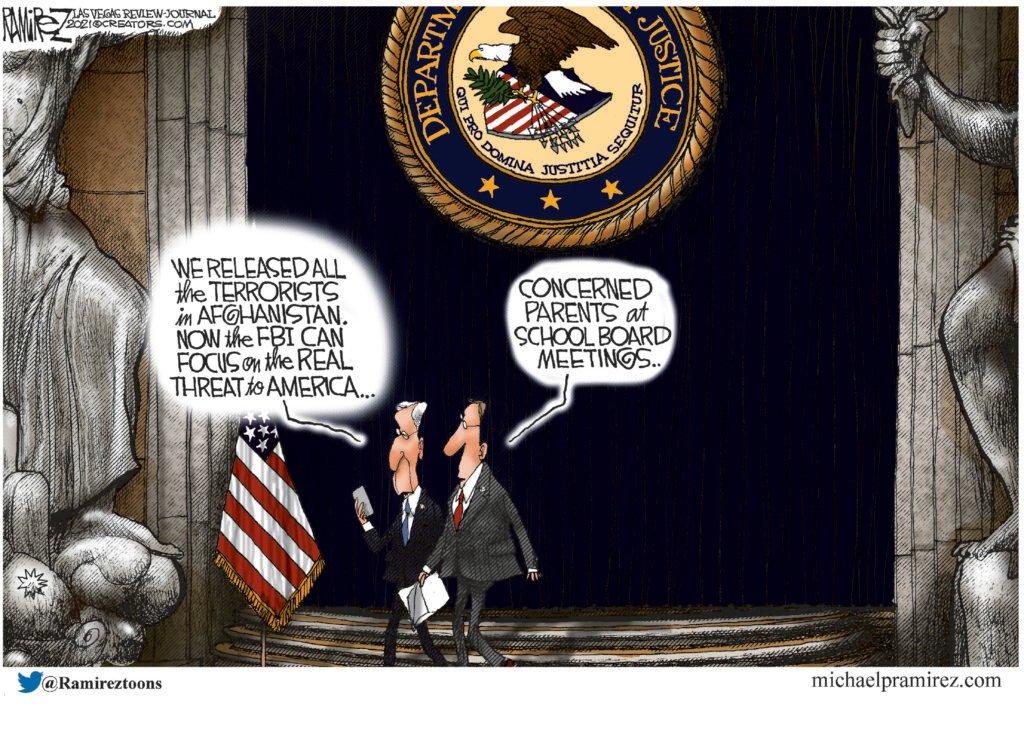 Parents and politicians are slamming the Department of Justice’s decision to bring in the FBI to investigate a spike in “threats against school administrators, board members, teachers, and staff,” saying the Biden administration is likening their protests of “woke” policies such as Critical Race Theory — as well as mandatory mask wearing — to “domestic terrorism.”

“Dear @TheJusticeDept Merrick Garland and @FBI Director Christopher Wray,” Asra Nomani, vice president of investigations and strategy at Parents Defending Education, posted on Twitter. “This is what a domestic terrorist looks like? You are criminalizing parenting, and you owe the people of America a swift apology.”

Nomani’s group has been researching how school boards across the US implement “woke” ideas into curricula, such as critical race theory.

In recent months, dozens of parents have taken a stand in school board meetings against the teaching of Critical Race Theory in classrooms and to protest mask mandates, causing some to wonder what the FBI and DOJ are actually investigating.

The DOJ move was spurred by the National School Boards Association asking the Biden administration for assistance, suggesting that there have been threats and acts of violence and equating those to domestic terrorism.

In a separate tweet, Nomani claimed Attorney General Merrick Garland issued a “declaration of war” on parents when he announced the initiative on Monday.

Another parent, Nicole Solas from Rhode Island, accused the FBI of being “the politics police,” while claiming any “legitimate” violence is already “sufficiently addressed by your local police.”

In a memo released Monday, Garland announced that while “spirited debate about policy matters is protected under our Constitution, that protection does not extend to threats or violence or efforts to intimate individuals based on their views.”

The investigation will be looking at the recent spike in acts of violence against school staff members, however, Garland’s memo did not specify what those acts were.

In a Sept. 29 letter, the National School Boards Association said much of this opposition led to dozens of incidents at school board meetings this year, claiming, “America’s public schools and its education leaders are under an immediate threat.”

The NSBA suggested that “[a]s these acts of malice, violence, and threats against public school officials have increased, the classification of these heinous actions could be the equivalent to a form of domestic terrorism and hate crimes” and asked that the administration review the question.

The group further asked the Biden administration to consider its powers under the Patriot Act, the sweeping surveillance legislation passed in the aftermath of the 9/11 attacks.

While Garland’s memo follows the NSBA’s request for help, he did not specify whether incidents related to the implementation of mask mandates or critical race theory would be investigated. Additionally, the memo does not classify the incidents as domestic terrorism.

Leftwing indoctrination in America’s schools has become a malignancy.  Academic intelligentsia wants complete control of your kids and it will use union propaganda, insults, dismissive epithets, and force to get it.

The State knows how to raise your children better than you. They’ve even said it out loud:

Squires is the type of malignancy that has spread throughout the American school system. The State knows what’s best for your kids.

Parents and communities are fighting back against this bullshit. Which throws the teachers unions and the weaponized jackboots at the DOJ into grand mal seizures.

A few days ago, the Department of Justice under the radical Attorney General Merrick Garland announced that the National Security Division has a new domestic mission. According to Garland, effective immediately, the National Security Division is handling the investigation of quote, “harassment, intimidation, and threats of violence against school board members, teachers, and workers in our nation’s public schools.” End quote.
So the question is: Who is threatening these teachers and school board members? Is it al-Qaeda? Is it the Russian government? Is it ISIS-K? No. It is parents. Parents are angry about what’s happening in schools. Why are they angry?
Well, take a closer look at the people Joe Biden has nominated to senior leadership positions at the Department of Education. Take a look at YouTube videos — while they still exist — of some of the school board meetings across the country over the past year and you will know exactly why parents are mad.
Parents who believe in things like biological sex, who oppose racial hierarchies imposed in pre-kindergarten classrooms, teaching kinds to hate their parents. Those are the threat according to the Biden administration.
You’ll notice if you look closely that nowhere in Merrick Garland’s recent order or the D.O.J.’s press release is any explanation of these quote “threats of violence.” What threats of violence? Has violence occurred at school board meetings? No.
Look closer and you’ll find this line quote, “The Justice Department will also create specialized training and guidance that will help school board members understand the type of behavior that constitutes threat.” Oh, so, it’s a propaganda operation funded by you, out of the Department of so- called Justice, designed to tell teachers and school board members that when parents complain, it’s domestic terrorism.
It’s not the First Amendment in progress, it’s not your constituents voicing legitimate complaints. It is effectively a foreign adversary trying to kill you.
The Biden administration is trying to convince school board members using the Department of Justice that they are in physical danger from parents and those parents are National Security threats.
Once again, nothing like this has ever happened in this country. This is an utter perversion of the mission and the power of the United States Department of Justice. It is almost impossible to overstate how sinister and crazy this is.

The Dems have created a system of bullying and persecution of political opponents. This shit usually happens in Communist countries and Banana Republics.