The raid was conducted by the same malfeasants behind the Russia hoax, the sham January 6 inquisition, and the fake Gretchen Whitmer kidnaping.

They must have run out of black printer ink. 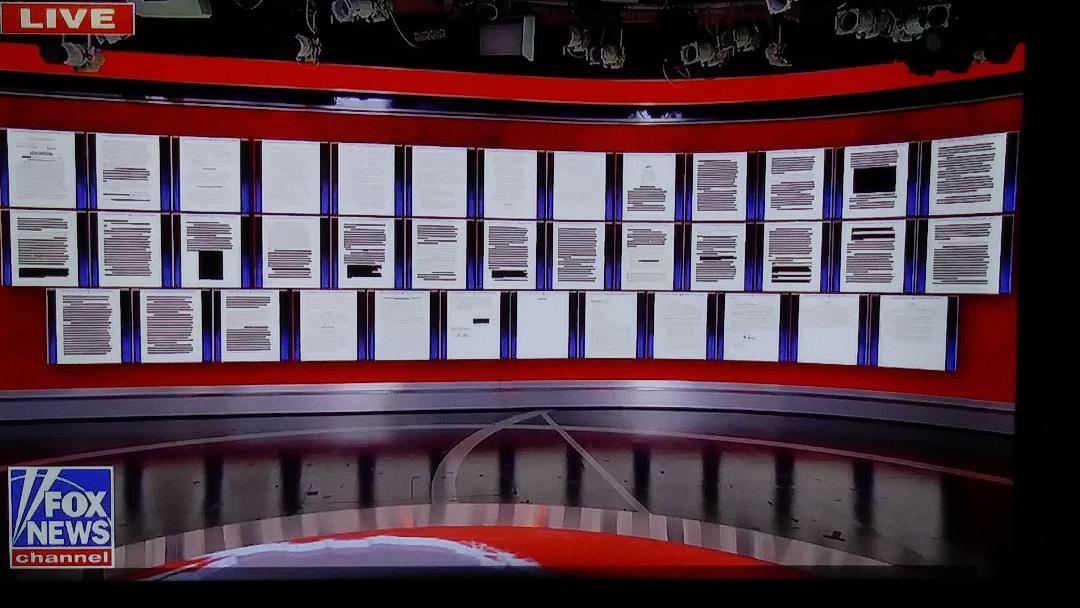 Former President Trump is incensed over the DOJ’s release of the heavily redacted affidavit used to justify raiding his home, while the agency claimed it had probable cause to believe that evidence of obstruction would be found in documents at his residence.

……Fox News reporter David Spunt surprisingly concluded, “This affidavit released is 38 pages long and not nearly as redacted as some thought it may be. There are 38 pages, as I say. It talks about the introduction and agent background. I’m going through and you can see right here that this explains — and I have not had a chance to look at this because the site was crashing as this came down.”

“We can see a little bit about why — and I want to read the probable cause section right here. This is the reasoning the judge signed off on the search warrant,” he continued.

“Right here is the probable cause section and it says, ‘February 9th, 2022, the special agent in charge of the Inspector General’s national archives that were referred to DOJ and specifically talks about some of the communications between the Trump team down at Mar-a-Lago and the national archives up here in Washington, DC,” Spunt added.

That’s how this whole political farce originated.  It was triggered by an angry liberal national archives librarian. 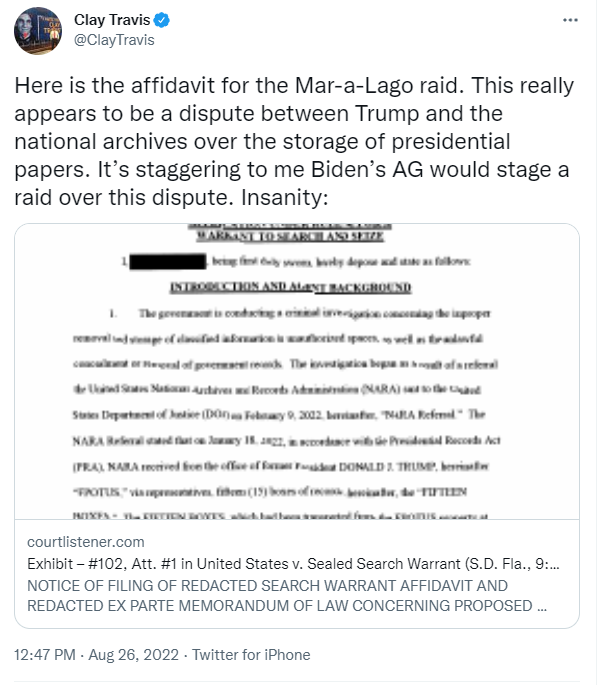 …….Including documents already turned over, the FBI asserts that the former president had 184 documents, 67 of which were allegedly confidential, 25 were top-secret, and handwritten notes in boxes that were turned over to the National Archives. Using that premise the FBI concluded that the raid was warranted.

Another outrageous and nonsensical reason given was that they feared if the classified documents were released, it could compromise “clandestine human sources.”

That’s funny. The thousands of classified emails Hillary kept on her illegal unsecure home computer were hacked by the ChiComs.

The FBI never raided her home.

Clinton operative Sandy Berger stole classified documents from the national archives and destroyed evidence.  He got off.

President Trump did exactly what other presidents have done. When they leave office, they take documents with them.

……In reality, the Presidential Records Act is the Presidential Damn-Near-Perpetual-Secrecy Act. Former presidents pocket multimillion-dollar advances for their memoirs while their records are mostly quarantined for decades from the citizens they often misgoverned.

…….Obama White House lawyers repeatedly invoked the Presidential Records Act to “delay the release of thousands of pages of records from President Bill Clinton’s White House,” Politico reported. At the end of his presidency, Barack Obama trucked 30 million pages of his administration’s records to Chicago, promising to digitize them and eventually put them online — a move that outraged historians.

More than five years after Obama’s presidency ended, the National Archives webpage reveals that zero pages have been digitized and disclosed. People can file requests via the Freedom of Information Act (a law Obama helped wreck) to access Obama records, but responses from presidential libraries can be delayed for years, even more than a decade, if the information is classified.

Similarly,  Joe Biden double-crossed Americans on disclosing records from his 36-year Senate career. In 2011, Biden donated 1,875 boxes of documents from his Senate days to the University of Delaware, which received federal subsidies to curate the collection while it was locked up. Biden and the university library promised to unseal the records “two years after Biden retires from public office.” Biden retired as vice president in January 2017. But the library announced just before Biden launched his presidential campaign that secrecy would continue until two years after Biden “retires from public life.”

The FBI has yet to raid the homes of Obama or Biden to retrieve the documents for the national archives.

The former president released a brief, funny meme that simply stated, “They missed a page!” ridiculing the over-the-top redaction of the affidavit. It shows a mocked-up redacted page that only shows the words, “Make America Great Again.” The meme went viral almost immediately. 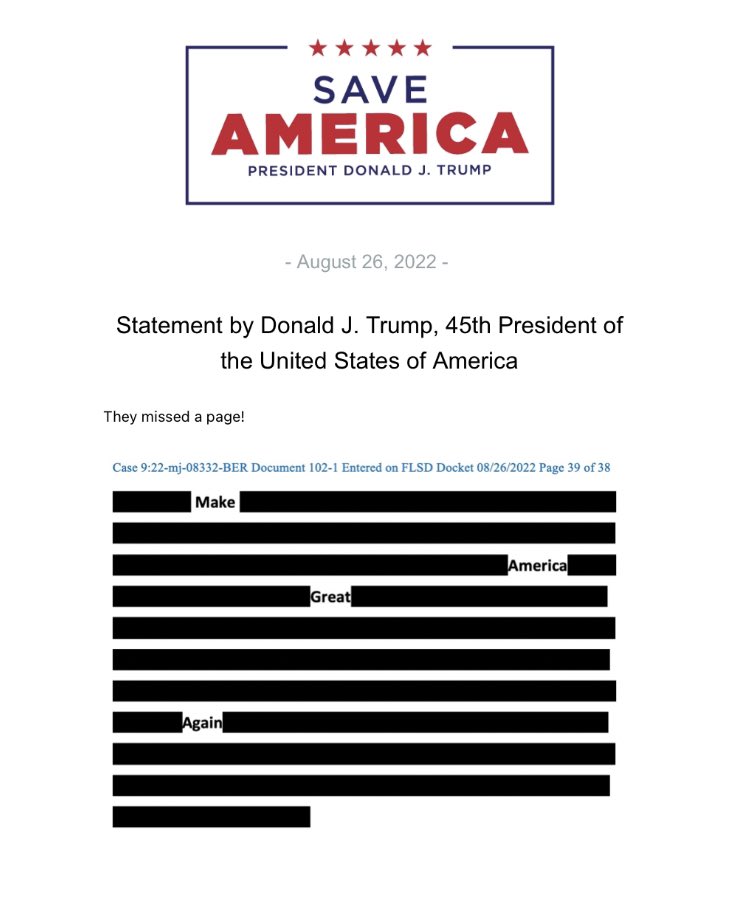 The Department of Justice justified the invasion of Trump’s home claiming in the affidavit that there is a “criminal investigation concerning the improper removal and storage of classified information” underway.

The DOJ asserted that large portions of the 38-page affidavit were redacted to protect the identity of civilian witnesses and members of law enforcement, including FBI agents. They contend that airing the full document could potentially “erode trust” in the government’s investigation.

This whole archives thing, the whole presidential records thing, this classified records thing, it’s just an excuse for them to go in there. None of this classification stuff even matters. Trump said he declassified everything that was still there in the boxes. They may have had classification markings on them and the media is using that to scare you, but if Trump declassified something and a lawyer doesn’t change a little marking on it — doesn’t matter. Plus, he’s the president. He has legal access to whatever Trump administration document he wants when he leaves office. That’s the deal all presidents have.

Well, according to the affidavit, there appears to be two major concerns: where the documents were stored and how they were stored. The affidavit states: “I believe that the storage room and other spaces within the premises are not currently authorized locations for the storage of classified information or NDI.” NDI is national defense information. So let me get this straight: Trump has some Trump administration documents locked up in the storage room of a basement of a private club guarded by Secret Service agents? That’s the reason for the raid? These are 10 times more secure than Hillary Clinton’s materials left on a server in Chappaqua, begging for our enemies to penetrate, but they also didn’t like how the documents were stored.

Are you ready for this? It says of most significant concern was that highly classified records were un-foldered, intermixed with other records and otherwise unproperly identified. Wait a minute, you’re telling me Trump‘s biggest crime is his filing system, that he mixed newspaper clippings with a love letter from Little Rocket Man? Call Staples right away. We need a paralegal in here immediately to organize these files. This is why the Justice Department didn’t want to release the affidavit. It’s embarrassing.

What ever happened to the nuclear secrets he was selling to the Saudis? Now, this is about a file cabinet? What’s in the file cabinet again? Don’t know. They won’t tell us because it’s classified. They’ll just leak it.

Hillary Clinton refused to comply with subpoenas to turn over thousands of classified documents she had on her home computer, and then destroyed devices and wiped her computer of evidence.  Attorney General Loretta Lynch met with Bill Clinton on board her private jet in what was clearly a conflict of interest and a conversation on whether or not the DOJ would indict Hillary for her crimes.

After that, the fix was in.  No FBI agents raided her home.  James Comey covered up for her crimes.

I was an intelligence analyst for the bulk of my Army career.  I had a TS/SCI clearance. If I had done a fraction of what this scrunt has gotten away with, I’d have been Court Martialed, given a dishonorable discharge, and thrown under Leavenworth.

Biden’s praetorian guards are working overtime to ignore real criminals and engage in political persecution. This will not end well for the corrupt FBI or the DOJ.

When are they going to raid the Biden Crime Family? Hunter’s laptop is a trove of evidence, including the illegal gun he waved around in the presence of a prostitute. The FBI took care of that too. They protected him. The FBI not only didn’t charge him, but they went so far as to pay a visit to the gun store, where Hunter Biden had lied on the Federal gun form, committing a felony, and tried to grab the paperwork so no one would know. No red flags. No alarm bells. Just a homicidal pedophile crackhead getting away with a federal crime, because Dad.

When are they going to investigate the inherent corruption of the Pelosi’s, especially their insider trading?

Bottom line:  The raid on Mar-a-Lago is a prime example of selective politicized targeting. It’s simply a tactic to prevent President Trump from running for office in 2024.  Don’t think for one second that if they had a basket full of bombshells that they wouldn’t be holding daily press conferences, squeezing all the notoriety out of it they could. It’s political theater.