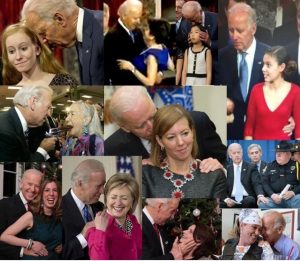 Speaking on the condition of anonymity, the agent asserted that,  “We had to cancel the VP Christmas get together at the Vice President’s house because Biden would grope all of our wives and girlfriend’s asses.”The annual party was for agents and Navy personnel who were tasked with protecting the Biden family.

“He would mess with every single woman or teen. It was horrible,” the agent said.

According to the source, a Secret Service agent once got suspended for a week in 2009 for shoving Biden after he cupped his girlfriend’s breast while the couple was taking a photo with him. The situation got so heated, the source told Cassandra Fairbanks, that others had to step in to prevent the agent from hitting the then-Vice President.

Additionally, the agent claims that Biden would walk around the VP residence naked at night. “I mean, Stark naked… Weinstein level stuff,” he added.

He said that the men on duty would frequently stand in front of female agents and Navy women that were present “like a damn guardian.” On some occasions, they would make up reasons to get the women away from where he was.

The agent said he was specifically concerned about women in the Navy.

“They weren’t allowed to disobey him at all, but we’d take them away under pretend auspices,” the agent stated.

The official Vice Presidential residence is the Queen Anne style house at One Observatory Circle in Washington, DC, which is located on the northeast grounds of the U.S. Naval Observatory. The property is maintained and cared for by the service branch.

“Agents say that, whether at the vice president’s residence or at his home in Delaware, Biden has a habit of swimming in his pool nude,” Kessler wrote. “Female Secret Service agents find that offensive.”

Our source confirmed this sentiment, adding that “it was especially an issue at his Delaware house that he would go to every weekend.”

“He would only get naked when Jill was absent,” he added.

Biden has also long been criticized for his contact with women and girls in photos and videos, and was even referred to as “Creepy Uncle Joe Biden” by the Washington Post.

In a report from the Washington Examiner titled, ‘Joe Biden’s Woman Touching Habit,’ Byron York wrote that he has a tendency to be “particularly affectionate with women in business and social situations, like the 2013 Christmas party at which he embraced reporter Amie Parnes.”

Not only that, but his mental state is very unstable.

He compared victims of domestic violence to the “man rape”  in the film Deliverance.

He told a newly-sworn in female senator, “Spread your legs, you’re going to get frisked”. The look on her husband’s face says it all. He walked away immediately after the picture was snapped.  Fuckin’ Biden. What a scumbag.

He told a group of supporters in Danville, Va that, ‘Republicans are gonna put y’all back in chains’.

He ranted about “rape” and Bush “burning down houses” during a speech pushing Obama’s tax-raising ‘jobs bill’.

He called his sister a “girl-boy,” meaning a tomboy, and then explained that girl-boys are softer than “girl-girls.”

During a Sept. 12, 2008, speech in Columbia, Mo., Biden called for Missouri State Sen. Chuck Graham, who is wheelchair-bound, to “stand up.”

He had bizarre ideas about Obama’s jobs bill and rape fantasies.

Oh, and his greatest racist hits: (read the thread)

I think playing Joe Biden's racist hits would be appropriate at this point.

Biden is a boorish, uncouth jackass. He’s a dunce with a tent flap for a mouth.

Those and dozens of other examples of his nutty behavior, clearly indicates that he’s in the latter stages of dementia. You know the deal, folks. If he were Republican, the media would be having grand mal seizures.

1 thought on “Former Secret Service Agent: ‘We Had to Protect Women From Biden, Weinstein Level Stuff’”