Dear libtards, remember this shit the next time you praise the “religion of peace“.

When news broke last month that Iran officials had cut the fingers of one of their citizens after being found guilty of theft, it served as a grim reminder that the regime is built on a heavy-handed and repressive apparatus that enforces strict adherence to Islamic law.

Should the law be broken, Iranians potentially face severe, cruel and inhuman punishment.

Cruel and inhumane punishments such as amputations are imposed by Iranian courts for crimes like theft, also punishable by flogging. Amnesty International recently reported that Iranian authorities cut off the hand of a man in prison accused of stealing. The government claims that the Iranian people welcome such punishments for those who disrupt public order without acknowledging the domestic movement to abolish the practice or the vast condemnation from the international community.

People who commit crimes such as theft can face arcane flogging sentences as codified by the Iranian penal code, according to Amnesty International. A flogging punishment can also be handed out for blasphemy charges and for what officials describe as “financially corrupt” individuals and “saboteurs of the economy.” Many different crimes can warrant a flogging punishment, including crimes that fall within the authority of the so-called “morality police” that disturb the social fabric.

The morality police, known as Gasht-e Ershad in Farsi, is formed by Iran’s religious authorities who enforce a strict interpretation of Iran’s Islamic code of public conduct. “There are three major societal prohibitions under the jurisdiction of the morality police”, Sarah Leah Whitson, Executive Director of the Middle East and North Africa Division at Human Rights Watch, explained to Fox News.

The first prohibition is on so-called bad hijabs that don’t cover a women’s face.

“Authorities will prod, poke, and publicly shame a woman if she is improperly covered,” Whitson said. The hijab requirement is more strictly enforced in some places than others and there is a strong and vibrant movement among women to reject hijab laws, with many suffering arrest and jail time. Human Rights Watch has documented Iran’s crackdown on women violating the compulsory law to wear the hijab. In July 2019, a mother and daughter were sentenced to prison for defying the public dress code. Women continue to revolt against the law despite the risk of an unjustified lengthy imprisonment.

The second prohibition is on drinking and selling alcohol. Breaking into the homes of people suspected of drinking alcohol is a common tactic used by the police, Whitson explained. Amnesty International reported in July 2018 that a man was tied to a tree and flogged 80 times for a charge he had received a decade earlier for drinking alcohol when he was a teenager.

Adultery between consenting adults, considered a particularly egregious crime, is the third prohibition and can be punishable by up to 100 lashes and even death. The Islamic penal code also does not explicitly prohibit stoning and a judge has the discretion to impose stoning as a penalty for extramarital relationships, although it has not been implemented in Iran in many years now. The morality police routinely harass and flog citizens for innocent displays of affection deemed morally inappropriate like hugging, kissing in public and homosexual acts.

This type of public moral authority is not restricted to Iran but is endemic across the Middle East North Africa region. Saudi Arabia, Sudan, and even the relatively progressive and Western oriented Moroccan monarchy have police forces tasked with enforcing morality laws and dress codes.

This guy was flogged for drinking alcohol: 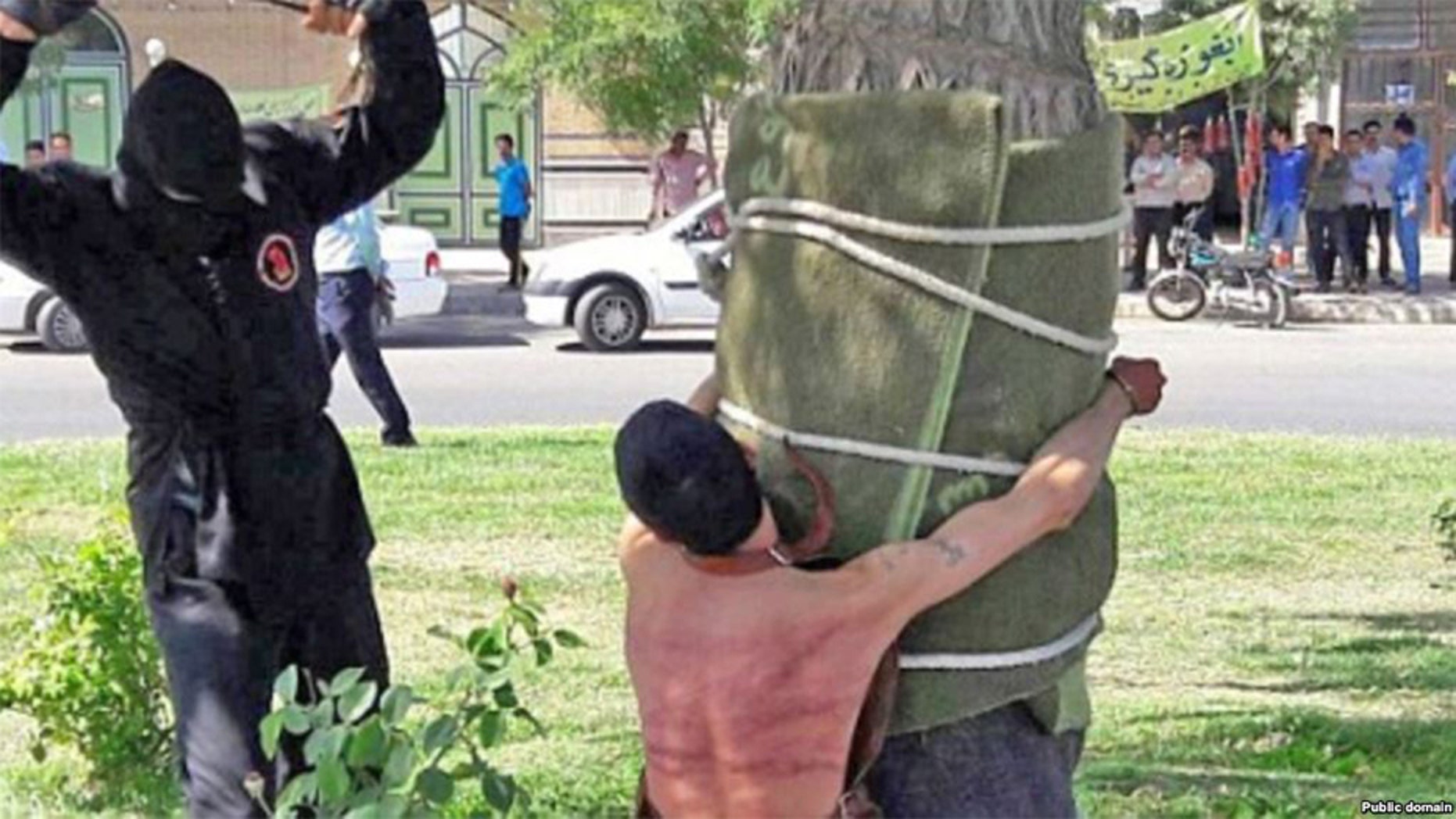 B. Hussein Obama’s policies toward the violent theocracy in Tehran included giving payoffs to Iranian banks, paying $400 million in ransom to the Iranian thugs for hostages, and essentially  giving them the green light to make bombs. Iran not only continued its nuke development , but used the aid from Obama as an added benefit.

Thankfully, we now have a President who tells them to fuck off.