This is a pretty thorough connecting of the dots that clarifies Obama’s wielding of intelligence agencies against the Constitution, American citizens and political opponents.

He used the IRS  and the DOJ as a billy club against patriots and reporters, so the extent of his progression into sedition is not surprising.

Compiled via the Conservative Treehouse

His name is Admiral Mike Rogers.

……On March 20th 2017 congressional testimony, James Comey was asked why the FBI Director did not inform congressional oversight about the counterintelligence operation that began in July 2016.

FBI Director Comey said he did not tell congressional oversight he was investigating presidential candidate Donald Trump because the Director of Counterintelligence suggested he not do so. *Very important detail.*

FBI Director James Comey was caught entirely off guard by that first three minutes of that questioning. He simply didn’t anticipate it.

……Obviously, based on what we have learned since March 2017, and what has surfaced recently, we can all see why the FBI would want to keep it hidden that they were running a counterintelligence operation against a presidential candidate. After all, as FBI Agent Peter Strzok said it in his text messages, it was an “insurance policy”.

……FBI Director James Comey told congress on March 20th, 2017, the reason he didn’t inform the statutory oversight “Gang of Eight” was because Bill Priestap (Director of Counterintelligence) recommended he didn’t do it.

……Here’s where all the dots connect: 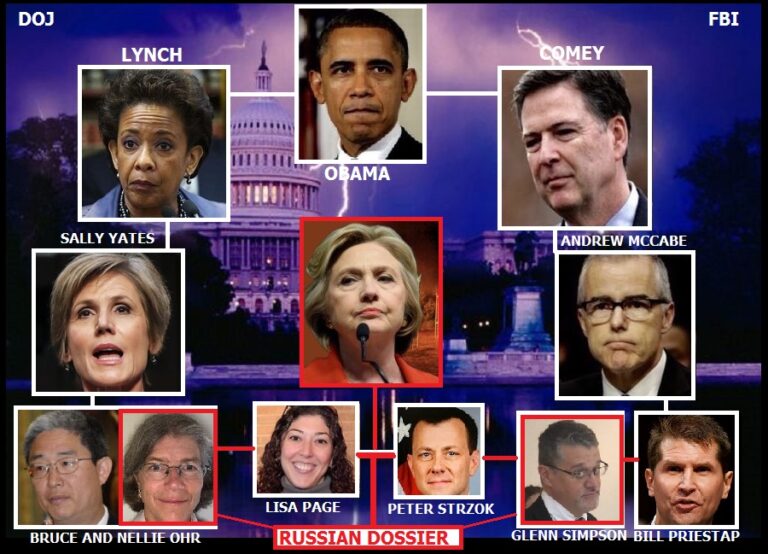 ……Fast forward to 2018 – Aside from the larger Russian conspiracy narrative, up to now the controversial media story has been around the origin of the 2016 FISA warrant(s).

As previously stated by all reporting there was a June 2016 FISA application that was denied, and an October 2016 application that was approved.  The current line of congressional inquiry surrounds the underlying content of the requested FISA warrant, and whether it was built upon fraud and manipulated content (the ‘Steele Dossier’) presented to the FISA Court (FISC).

Recently the media have been working frantically, against an entire year of prior support for the Steele Dossier, to distance the origin of the FBI counterintelligence operation from the dossier.   The reason why reveals the bigger underlying story.

When Intelligence Chairman Devin Nunes explained his concern in March 2017 about what he saw from a review of 2016 intelligence gathering, reporting and subsequent unmasking, the issue behind his concern was clouded in mystery. Indeed the larger headlines at the time were about demanding a special prosecutor and driving the Russia conspiracy narrative.

……As many of you are aware, immediately following the 2016 presidential election NSA Director Admiral Mike Rogers traveled to Trump Tower to meet with president-elect Donald Trump. The day AFTER the Rogers visit, President-elect Trump moved his transition team out of Trump Tower to Bedminister New Jersey.

Later, during the December 2016 and Jan, Feb, March, April 2017 Russian Conspiracy frenzy, when the entire intelligence community seemed to be collectively leaking against Trump’s interests, those suspicions gained even greater likelihood. However, what we learned in 2017 about the activity in 2016 almost guarantees that was exactly what happened. That back-story also ties into both the FISA issue and the Devin Nunes concern.

Section 702 – Item #17 “About Queries” is specifically the collection of emails, and phone call surveillance of U.S. persons.

The public doesn’t discover this issue, and NSA Director Rogers action, until May 2017when we learn that Rogers told the FISA court he became aware of unlawful surveillance and collection of U.S. persons. Put into context, with the full back-story, it appears that 2016 surveillance was the political surveillance now in the headlines; the stuff Chairman Nunes is currently questioning.

……As a result of Rogers suspecting [FISA 702 (#17 – email and phone calls)] surveillance activity was being used for reasons he deemed unlawful, in mid 2016 Rogers ordered the NSA compliance officer to run a full audit on 702 NSA compliance.

Again, 702 is basically spying on Americans; the actual “spying” part is 702. Item 17 is “About Queries“, which allows queries or searches of content of email and phone conversations based on any subject matter put into the search field.

The NSA compliance officer identified several strange 702 “About Queries” that were being conducted. These were violations of the fourth amendment (search and seizure), ie. unlawful surveillance and gathering. Admiral Rogers was briefed by the compliance officer on October 20th, 2016.

Admiral Mike Rogers ordered the “About Query” activity to stop, reported the activity to the DOJ, and then went to the FISA court.

……The DOJ National Security Division set Admiral Mike Rogers up to take the fall for their unlawful conduct. They preempted Rogers by filing a notification with the FISA Court on 26th September 2016 (look at the pdf). DOJ-NSD head John P Carlin was setting up Rogers as the scapegoat while knowing the NSA FISA compliance officer was still reviewing their conduct. Carlin wouldn’t notify the court unless he was trying to cover something. Carlin then announced his resignation. The NSA compliance officer did not brief Admiral Rogers until 20th Oct 2016. Admiral Rogers notified the FISC on 26th Oct 2016.

……Obama’s political operatives within the DOJ-NSD were using FISA 702(17) surveillance “about inquiries” that would deliver email and phone communication for U.S. people (Trump campaign). The NSD unit was working in coordination with the FBI Counterintelligence Unit (Peter Strzok etc.).  In an effort to stop the activity NSA Director Mike Rogers initiated a full 702 compliance review.  However, before the review was complete the DOJ-NSD had enough information for their unlawful FISA warrant which worked retroactively to make the prior FBI surveillance (began in July ’16 per James Comey) lawful. Rogers stopped the process on October 26th 2016. As a result of his not going along, Rogers became a risk; Clapper demanded he be fired.

Ten days after the election, November 17th 2016, Admiral Rogers travels to Trump Tower without telling ODNI James Clapper. Rogers likely informs President-elect Trump of the prior activity by the FBI and DOJ, including the probability that all of Trump Tower’s email and phone communication was being collected.

The FISA court gave Obama permission to wiretap Trump in October under the guise of national security.  Obama did that in case Trump was elected, so he could use whatever eavesdropping he compiled to undermine the Trump administration.  He pulled an end-around and basically lied to FISA in order to get permission to wiretap.

They found no wrongdoing, and won’t admit to the wiretaps or the lack of evidence.

The entire debacle is another one of Obama’s violations of the 4th Amendment.

Check out this thread on Twitter, which provides more analysis:

McCabe and at least a half-dozen other FBI employees quit, retired, were fired, or were reassigned as a result of fallout from the politicization of the FBI. Yet, as Barack Obama left office, his chief of staff, Denis McDonough, strangely boasted that the Obama administration “has been historically free of scandal.” Obama himself recently concluded of his eight-year tenure, “I didn’t have scandals.”

For nearly eight years, the Obama administration sought to cover up serial wrongdoing by waging a veritable war against the watchdog inspectors general of various federal agencies.

In 2014, 47 of the nation’s 73 inspectors general signed a letter alleging that Obama had stonewalled their “ability to conduct our work thoroughly, independently, and in a timely manner.”

The frustrated nonpartisan auditors cited systematic Obama-administration refusals to turn over incriminating documents that were central to their investigations.

The administration had purportedly tried to sidetrack an IG investigation into possible misconduct by then–Sacramento mayor Kevin Johnson. In addition, the Obama administration reportedly thwarted IG investigations of Amtrak, the Environmental Protection Agency, the Troubled Asset Relief Program, and the Office of Management and Budget.

Despite the campaign against these independent federal auditors, a number of inspectors general still managed to issue damning indictments of unethical behavior.

In 2012, Horowitz recommended that 14 Justice Department and ATF officials be disciplined for their conduct in the “Fast and Furious” gun-walking scandal.

A 2013 IG audit found that the IRS had targeted conservative groups for special scrutiny prior to the 2012 Obama reelection effort.

In 2014, an internal audit revealed that CIA officials had hacked the Senate Intelligence Committee’s computers while compiling a report on enhanced interrogation techniques. CIA director John Brennan had claimed that his agents were not improperly monitoring Senate staff computer files. He was forced to retract his denials and apologize for his prevarication.

In 2016, the State Department’s inspector general found that Hillary Clinton had never sought approval for her reckless and illegal use of an unsecured private email server. The IG also found that other Clinton aides silenced staffers who were worried about national security being compromised by the unsecured server.

Still, Obama was right in a way: A scandal does not become a scandal if no one acts on findings of improper behavior.

Under former attorneys general Eric Holder and Loretta Lynch, the findings of dozens of IGs were snubbed. That raises the question: What good are inspectors general if a president ignores any illegality and impropriety that they have uncovered?

Over eight years of his regime, Obama was pretty prolific with the wiretaps.

The intelligence agencies are politicized and need a major overhaul.  One of Obama’s last acts of malfeasance was to give the NSA increased power to do want it wants with the information it collects on American citizens.   Obama’s abuse of power was unprecedented. He used intelligence agencies to target political opponents.  When Sharyl Attkisson and James Rosen published damaging information about Benghazi and Fast and Furious, he had their emails, computers, and phones hacked.

He also used the IRS to target Tea Party groups.

Much of Obama’s corruption, lawbreaking, and Constitutional violations were well known.  No one in the entire Obama regime was held accountable for their crimes. The Dems will never go after their own and the GOP lacks the balls.