Hunter Biden introduced his father, then-Vice President Joe Biden, to a top executive at a Ukrainian energy firm less than a year before the elder Biden pressured government officials in Ukraine into firing a prosecutor who was investigating the company, according to emails obtained by The Post.

The never-before-revealed meeting is mentioned in a message of appreciation that Vadym Pozharskyi, an adviser to the board of Burisma, allegedly sent Hunter Biden on April 17, 2015, about a year after Hunter joined the Burisma board at a reported salary of up to $50,000 a month.

“Dear Hunter, thank you for inviting me to DC and giving an opportunity to meet your father and spent [sic] some time together. It’s realty [sic] an honor and pleasure,” the email reads.

An earlier email from May 2014 also shows Pozharskyi, reportedly Burisma’s No. 3 exec, asking Hunter for “advice on how you could use your influence” on the company’s behalf.

The blockbuster correspondence — which flies in the face of Joe Biden’s claim that he’s “never spoken to my son about his overseas business dealings” — is contained in a massive trove of data recovered from a laptop computer.

In other words, he lied. 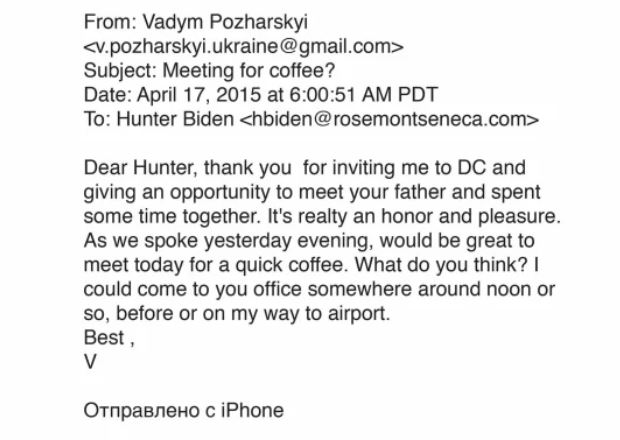 ……Less than eight months after Pozharskyi thanked Hunter Biden for the introduction to his dad, the then-vice president admittedly pressured Ukrainian President Petro Poroshenko and Prime Minister Arseniy Yatsenyuk into getting rid of Prosecutor General Viktor Shokin by threatening to withhold a $1 billion US loan guarantee during a December 2015 trip to Kiev.

“I looked at them and said: I’m leaving in six hours. If the prosecutor is not fired, you’re not getting the money,” Biden infamously bragged to the Council on Foreign Relations in 2018.

Shokin has said that at the time of his firing, in March 2016, he’d made “specific plans” to investigate Burisma that “included interrogations and other crime-investigation procedures into all members of the executive board, including Hunter Biden.”

Hunter Biden discussed leveraging his connection to his father in a bid to boost his pay from a Ukrainian natural gas company, according to an email he sent around the time he joined the firm’s corporate board.

In a lengthy memo to his then-business partner, Devon Archer, who already sat on the Burisma board, Biden repeatedly mentioned “my guy” while apparently referring to then-Vice President Joe Biden.

Under President Barack Obama, the elder Biden was the point person for US policy toward Ukraine, and he held a press conference there with Prime Minister Arseniy Yatsenyuk on April 22, 2014.

Hunter Biden’s email to Archer is dated a little more than a week earlier.

“The announcement of my guys [sic] upcoming travels should be characterized as part of our advice and thinking- but what he will say and do is out of our hands,” Hunter Biden wrote on April 13, 2014.

“In other words it could be a really good thing or it could end up creating too great an expectation. We need to temper expectations regarding that visit.”

This exclusive front-page story details the emails that The Post obtained on a hard drive, which unveil that Hunter Biden introduced his father to an advisor to Burisma Holdings, a corrupt Ukrainian energy firm that the younger Biden sat on the board of, less than a year before then-Vice President Biden asked Ukrainian officials to fire a prosecutor investigating the company.

Making matters more controversial, this is the first time that the public has learned of the April 2015 meeting in Washington, DC between the current Democratic presidential nominee and this Burisma advisor, whose name is Vadym Pozharskyi.

In an interview with Fox News, Sen. Ron Johnson (R-Wis.), the Chair of the Senate Homeland Security Committee, said, “We regularly speak with individuals who email the committee’s whistleblower account to determine whether we can validate their claims.”

“Although we consider those communications to be confidential,” he added, “because the individual in this instance spoke with the media about his contact with the committee, we can confirm receipt of his email complaint, have been in contact with the whistleblower, and are in the process of validating the information he provided.”

This revelation directly contradicts what former Vice President Biden stated publicly in September 2019, that “I have never spoken to my son about his overseas business dealings.”

“Dear Hunter, thank you for inviting me to DC and giving an opportunity to meet your father and spent [sic] some time together,” Pozharskyi wrote to Hunter on April 17, 2015.

In another email to Hunter from May 12, 2014, Pozharskyi asked him “urgently” for some “advice on how you could use your influence” to “stop what we consider to be politically motivated actions” against Burisma.

Facebook announced it will halt distribution of the New York Post’s breaking news detailing the discovery of emails concerning Hunter Biden’s foreign business dealings, even before the story is “independently fact-checked.”

The Post’s story details the discovery of a MacBook Pro with a “Beau Biden Foundation” sticker on it containing incriminating emails demonstrating that, despite his repeated denial, Democratic Presidential Nominee Joe Biden was both aware of and involved in some of Hunter’s Ukrainian business dealings.

Andy Stone, Facebook’s policy communications director and former staffer for multiple Democratic PACs and Congresspeople, announced the censorship on Twitter Wednesday morning, shortly after the publication of the story.

“While I will intentionally not link to the New York Post, I want be clear that this story is eligible to be fact checked by Facebook’s third-party fact checking partners. In the meantime, we are reducing its distribution on our platform,” Stone tweeted. 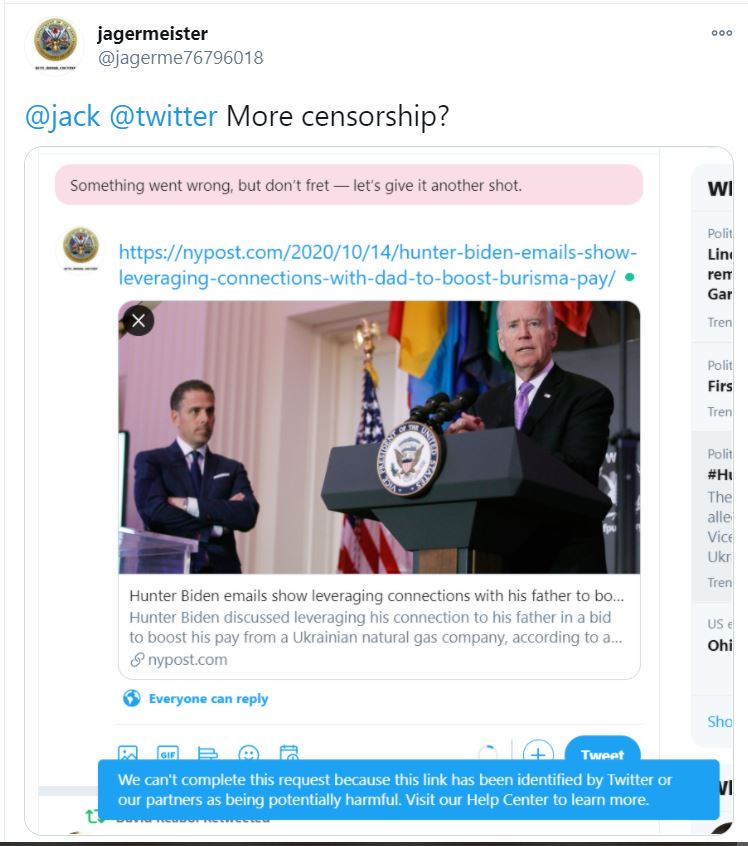 In spite of Twitter’s censorship, this is trending:

If this story involved Donald Trump Jr., the media would be saturated with every minute detail.

Ted Cruz fired off a letter to Jack: 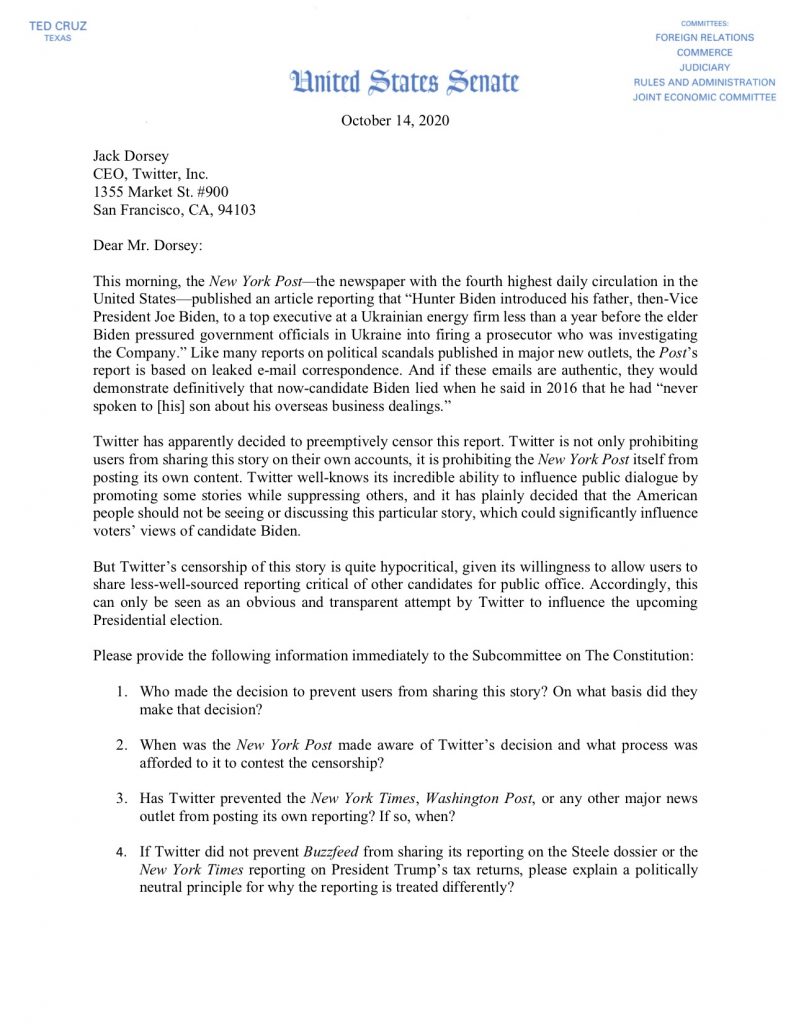 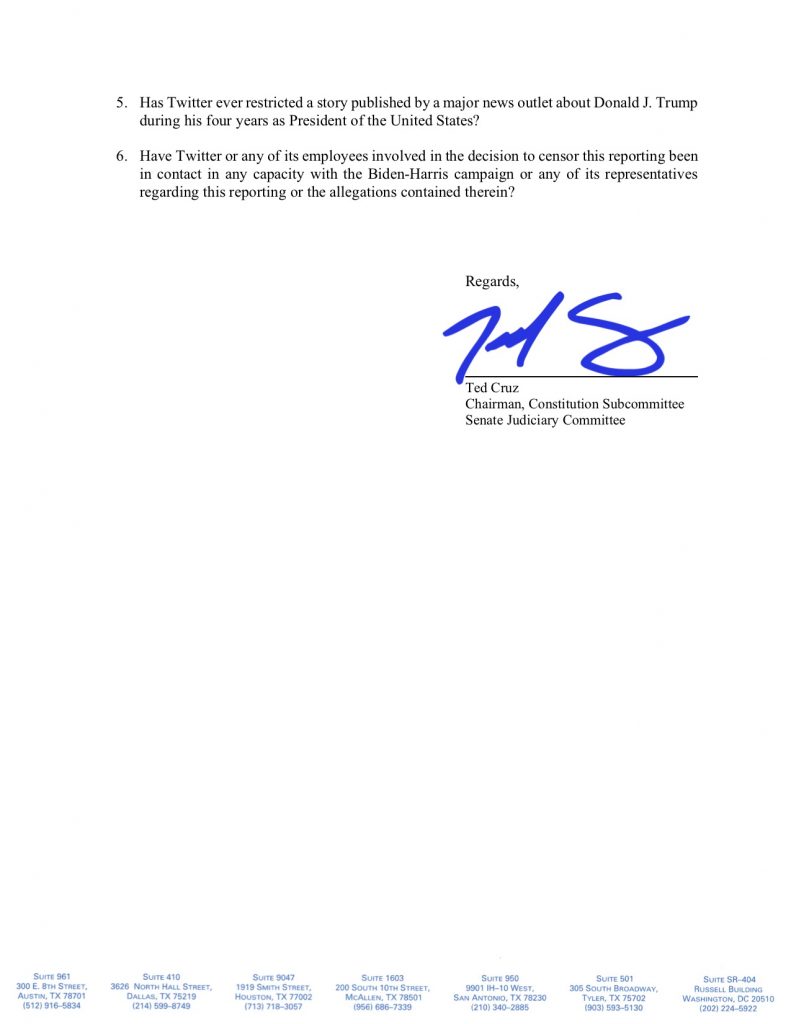