When Hunter Biden went on a crack binge and forgot he left his laptop at a repair shop, he never figured all those incriminating emails and evidence of corruption would end up in public.

Newly obtained emails from a Hunter Biden business partner lay out in detail how the Vice President’s son and his colleagues used their access to the Obama-Biden administration to arrange private meetings for potential foreign clients and investors at the highest levels in the White House. These never-before-revealed emails outline how a delegation of Chinese investors and Communist Party officials managed to secure a private, off-the-books meeting with then-Vice President Joe Biden.

In a 2011 email, Hunter Biden’s business associates also discussed developing relations with what one called “China Inc.” as part of a “new push on soft diplomacy for the Chinese.” These emails are completely unconnected to the Hunter Biden emails being released by the New York Post.

These and more explosive never-before-revealed emails were provided to Schweizer by Bevan Cooney, a one-time Hunter Biden and Devon Archer business associate. Cooney is currently in prison serving a sentence for his involvement in a 2016 bond fraud investment scheme.

In 2019, Cooney reached out to Schweizer after becoming familiar with the revelations in his 2018 book Secret Empires. Cooney explained that he believes he was the “fall guy” for the fraud scheme and that Archer and Hunter Biden had avoided responsibility.

Cooney, their associate who is currently serving a prison sentence on his conviction in the matter, later reestablished contact with Schweizer through investigative journalist Matthew Tyrmand. From prison, Cooney provided Schweizer with written authorization, his email account name, and password to his Gmail account to retrieve these emails. He authorized, in writing, the publication of these emails— notable because it is the first time a close associate has publicly confirmed Hunter’s trading on his father’s influence.

The emails offer a unique window into just how the Biden universe conducted business during the Obama-Biden Administration. These associates sought to trade on Hunter Biden’s relationship with, and access to, his father and the Obama-Biden White House in order to generate business.

For instance, on November 5, 2011, one of Archer’s business contacts forwarded him an email teasing an opportunity to gain “potentially outstanding new clients” by helping to arrange White House meetings for a group of Chinese executives and government officials. The group was the China Entrepreneur Club (CEC) and the delegation included Chinese billionaires, Chinese Communist Party loyalists, and at least one “respected diplomat” from Beijing. Despite its benign name, CEC has been called “a second foreign ministry” for the People’s Republic of China—a communist government that closely controls most businesses in its country. CEC was established in 2006 by a group of businessmen and Chinese government diplomats.

“I know it is political season and people are hesitant but a group like this does not come along every day,” an intermediary named Mohamed A. Khashoggi wrote on behalf of the CEC to an associate of Hunter Biden and Devon Archer. “A tour of the white house and a meeting with a member of the chief of staff’s office and John Kerry would be great,” Khashoggi said before including what should have been a major red flag: “Not sure if one has to be registered to do this.” Presumably, Khashoggi meant a registered lobbyist under the Foreign Agents Registration Act (FARA).

Khashoggi believed the trip presented “a soft diplomacy play that could be very effective” and would give Hunter Biden’s business partners “good access to [the Chinese] for any deal in the future.”

There’s much more at the link, including copies of the emails.

The owner of the computer repair shop, John Paul Mac Isaac, discovered the disturbing emails and contacted the FBI. The FBI told him to ‘stay quiet’.

The Delaware computer repair man who revealed Hunter and Joe Biden’s email dealings with a Burisma executive told reporters that the FBI had asked him to stay quiet about his acquisition of Hunter Biden’s laptop after they recovered the device through federal subpoena.

John Paul Mac Isaac owns a Delaware Mac computer repair store. He came into possession of Hunter Biden’s water-damaged laptop in 2019. When the younger Biden never returned to his store to pay for the repairs Isaac carried out on the device, the Mac legally became the property of Isaac under the terms of the repair agreement with Biden- contrary to false information from Twitter and establishment liberals who claim that the laptop’s contents were “hacked.”

Hunter Biden’s laptop contained information and emails that detailed what appear to be meetings between Joe Biden, Hunter Biden and a senior Burisma advisor named Vadym Pozharskyi. Joe Biden had previously denied ever meeting anyone involved with Burisma through his son’s suspicious employment with the Ukranian gas company, an assertion that appears disproven through the emails uncovered on Biden’s laptop.

However, Isaac revealed that the FBI had tried to convince him to stay silent about his discovery of the laptop’s contents when speaking at length with reporters who arrived at his store on Wednesday after the New York Post published the story.

“They told me that nothing ever happens to people who don’t talk, the FBI, and that made me scared because that’s not something I would expect the highest branch of,” said Isaac. “Don’t, don’t — It was more along the lines of, in our experiences when stuff like this happens nothing ever bad happens to people that keep quiet,” he added.

A reporter asked him if he believed the FBI was conducting a “coverup” over the laptop and the subpoena, and he seemed to respond in the affirmative. “Yeah that’s how I feel about it kind of. Well shit. No comment–It’s too late.”

Isaac’s suggestion raises serious questions about the FBI’s involvement in his possession of the laptop.

A receipt from The Mac Shop in Wilmington shows Hunter Biden’s signature signing off the $85 repair, reports Fox News.

The paperwork also notes Biden’s name in the “bill to” section. 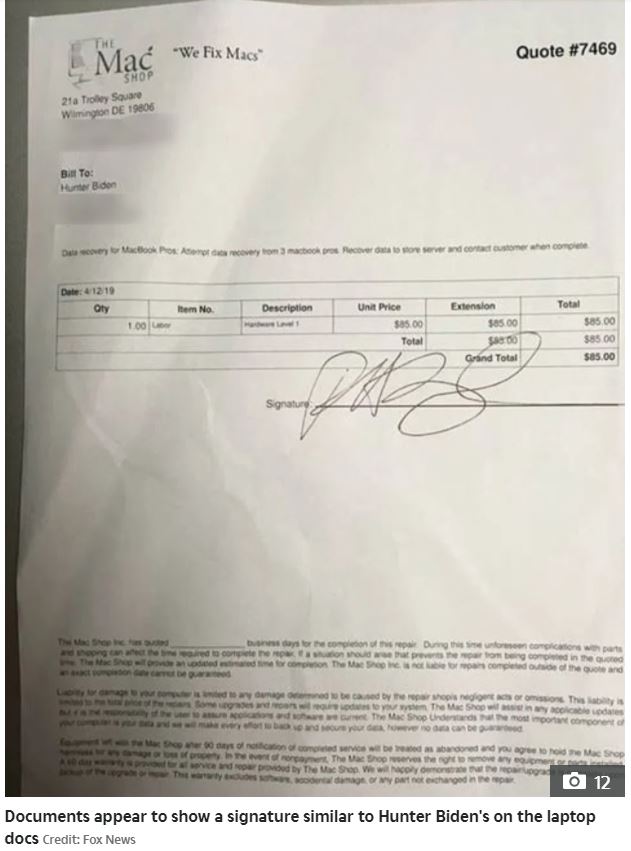 Why would the FBI try to hide the evidence on Hunter Biden’s laptop?  Christopher Wray has some explaining to do.  The FBI’s reputation is in the toilet thanks to James Comey’s legacy of corruption. The least Wray can do is restore some credibility by investigating the Biden Crime Family.