In 2018, an illegal by the name of Cristhian Behnna Rivera was arrested for murdering Mollie while she was on a jog, and dumping her body in the woods.

He was finally brought to trial and found guilty. 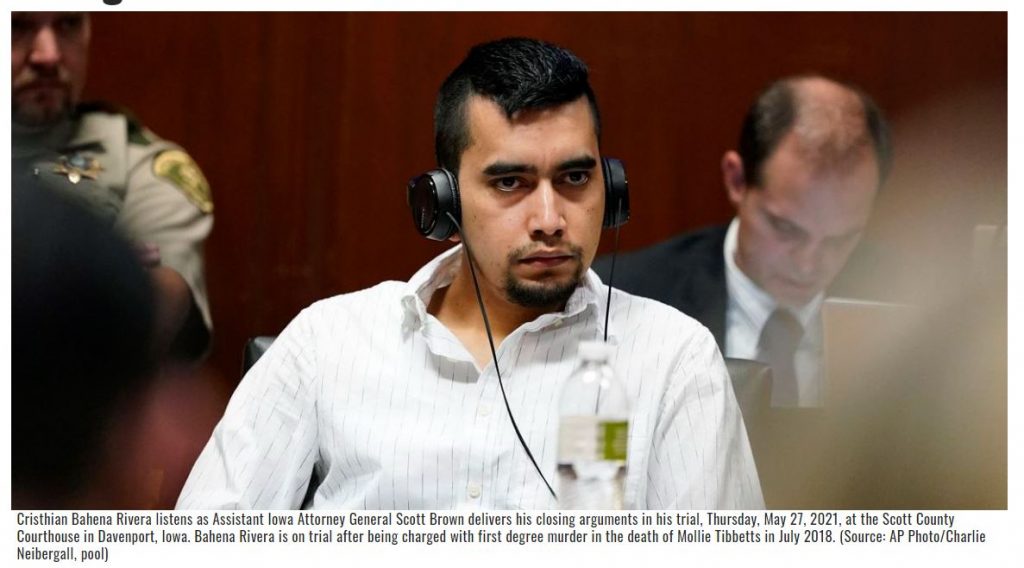 Cristhian Bahena Rivera has been found guilty of first-degree murder in the death of Mollie Tibbetts.
The verdict was reached on Friday.

Police said Tibbetts was attacked while out for a run in her hometown of Brooklyn, Iowa on July 18, 2018. Investigators found her body in a rural Poweshiek County field five weeks later.

Prosecutors brought 18 witnesses to the stand including investigators, the state medical examiner and a former police officer who interviewed Bahena Rivera.

Home surveillance video in Brooklyn showed what appeared to be a person running on July 18. Investigators said they believe it was Mollie Tibbetts. Moments later, they say a Chevy Malibu belonging to Bahena Rivera passed her multiple times. They pointed to the car’s distinctive chrome mirrors and door handles that made it stand out from other Malibus.

FBI agent Kevin Horan testified Monday about data obtained using Mollie’s cell phone signal and nearby cell phone towers. Horan explained that data showed Tibbetts’ phone traveled eastbound out of Brooklyn – on a path similar to known paths Tibbetts took while jogging – during the evening hours of July 18, 2018. The data showed the phone moved at a pace that was consistent with someone running at a 10-minute-mile pace.

Then at 8:35 p.m., the phone began traveling southbound at speeds of up to 60 mph and stopped moving in rural Poweshiek County at 8:53 p.m., the phone then stopped transmitting data to any nearby towers.

The state medical examiner later testified that he found at least nine stab wounds on Mollie’s body during an autopsy.

Dr. Dennish Klein testified he was unable to obtain useful blood or fingerprints during the autopsy due to the decomposition of the remains located during the morning hours of August 21, 2018. Klein said the autopsy found nine definitive wounds, but that he suspected up to 12 total wounds. He said he determined Tibbetts’ cause of death to be multiple stab wounds and the manner of death to be homicide.

Forensic anthropologist Heather Garvin noted sharp-force wounds were evident on the remains during her testimony.

Johnson also testified on the condition of Tibbetts’ body as she found it hidden in a cornfield. Johnson said Tibbett’s shorts, headband and underwear were located several feet away from her body.

Thousands of American citizens are murdered by illegals every year. Her classmate abetted one of them and Tibbetts became a statistic.

They should shoot the little beaner and dump his carcass back across the border.