Why weren’t they shot?

Democratic Congresswoman Joyce Beatty was arrested in the Hart Senate Office Building Thursday after she led a group of protesters into the building.

A photo posted by Politico reporter Nicholas Wu shows Beatty and others being zip-tied by Capitol Police. 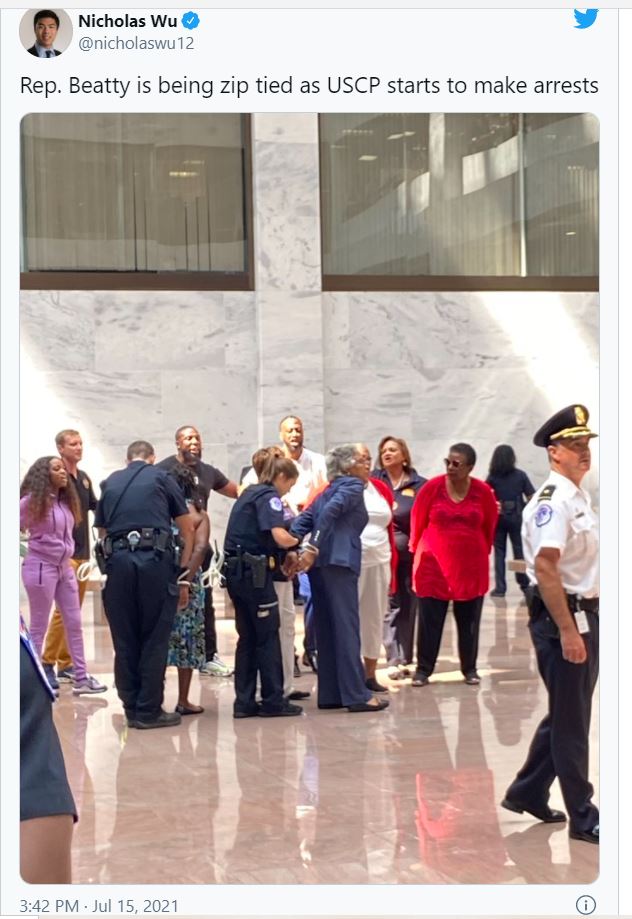 Beatty, who is the head of the Congressional Black Caucus, was seen moments earlier walking into the building chanting “end the filibuster.”

Around the same time of the arrest, Beatty posted on her Twitter account that she was marching to the Senate to “protect voting rights” for Black women.

…….”This afternoon, nine people were arrested for demonstrating in a prohibited area on Capitol Grounds,” the Capitol Police said in a statement to Fox News. “At approximately 3:30pm, the United States Capitol Police responded to the Atrium in the Hart Senate Office Building for reports of illegal demonstration activity. After officers arrived on the scene, they warned the demonstrators three times to stop. Those who refused were arrested for D.C. Code §22-1307. Two males and seven females were transported to USCP Headquarters for processing.”

When American patriots protested at the halls of corruption in D.C. the leftwing media and Dem politicians called them “terrorists” and ran to their psychoanalyst for therapy.

Since then,  FBI jackboots targeted an innocent man for attending President Trump’s 6 January rally, raided the wrong home in Alaska looking for Nancy Pelosi’s laptop, confiscated a Lego set from an “insurrectionist” and asked that citizens turn in their “extremist friends and relatives“.

MAGA protesters are held in jail without due process, murderers walk free.

But these infantile Demturds breach the Senate building and they get a slap on the wrist.