Calls for the resignation of Democrat John Kerry, the Biden administration’s Special Presidential Envoy for Climate, picked up steam on Monday following an explosive report published over the weekend in which Iranian Foreign Minister Mohammad Javad Zarif said that Kerry told him that Israel was behind hundreds of attacks on Iranian assets in Syria.

White House Press Secretary Jen Psaki and State Department spokesman Ned Price both refused to comment on the report when asked about it on Monday, saying that they do not comment on leaked materials.

Kerry decided to respond to it after Price and Psaki both declined, claiming, “I can tell you that this story and these allegations are unequivocally false. This never happened — either when I was Secretary of State or since.”

Free Beacon reporter Chuck Ross noted that Kerry did not specify which part of the story he claims is false. 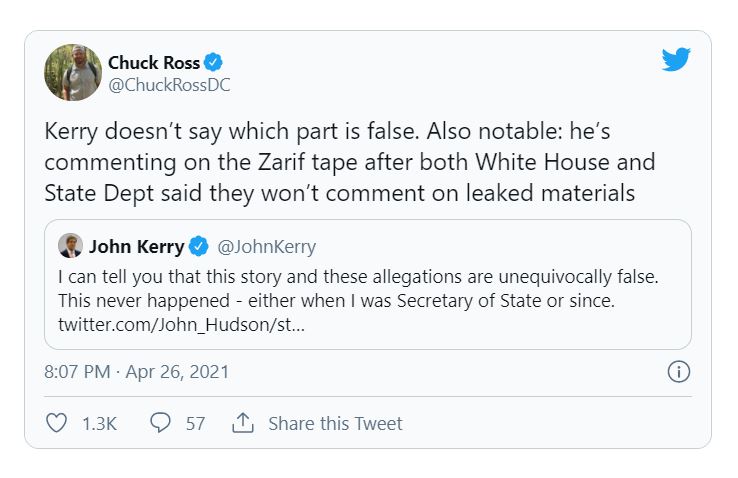 “If this tape is verified, it would signal catastrophic and disqualifying recklessness by Envoy Kerry to Foreign Minister Zarif that endangered the safety of Americans and our allies,” Sen. Ted Cruz (R-TX) said in a statement to The Daily Wire. “And it would be consistent with his long pattern of empowering Iran’s regime. Kerry poured hundreds of billions of dollars into the Ayatollah’s terrorist bank accounts, was a close confidant with Zarif during the Obama administration, and was caught repeatedly meeting with him during the Trump administration (notwithstanding the Logan Act) — and has never publicly accounted for what they discussed.”

The Democrats have a lengthy history of national security violations and violating the Logan Act, which prohibits citizens conferring with foreign governments against the interests of the United States.

Remember the Baghdad Democrats and the ‘good will’ trip Kucinich and Pelosi made to Syria in order to kiss Assad’s ass?

In 1983, Ted Kennedy offered to work with the Soviets to undermine Ronald Reagan’s efforts to protect America and defeat communism.  This goes way beyond political differences and disagreements. It’s sanctioned treason.

When Hillary was Secretary of State, the Clinton Foundation peddled influence and favors in return for millions of dollars in foreign donations; some of which came from governments, organizations, and individuals with some pretty nasty track records on terrorism.

Obama commuted the sentence of traitorous little ratfuck Bradley Manning, who leaked 700,000 battlefield reports and diplomatic cables to WikiLeaks.  Apparently, that was okay with the Dems as well.

If the Logan Act had been applied, all the Dems who subverted America’s security would be in prison.