UPDATE: LA police officer Deon Joseph extended an offer to James for a meeting so that he can educate James on the realities of policing. He’ll never get a response.

LeBron James tweeted and then deleted what amounted to a threat aimed at the heroic police officer who shot and killed a knife-wielding teen in Ohio on Tuesday.

Officers in Columbus, Ohio, arrived at a scene Tuesday afternoon where, according to police, 16-year-old Ma’Khia Bryant was shot and killed by an officer as she attempted to stab another person with a large knife. That officer’s body camera video of Bryant’s shooting appears to show her armed with a large blade as she lunges at another girl.

By all appearances, the cop who pulled the trigger saved a life.

Not only did the officer potentially save a life, but a black life. The department has released the name of the officer who shot Bryant, identifying him Wednesday as Nicholas Reardon, according to WBNS-TV.

Rather than Reardon being given praise for his quick thinking during a situation no cop wants to be in, or at least the benefit of due process, the officer is now being attacked and threatened by radical leftists online. One of those leftists who attacked the cop Wednesday was Los Angeles Lakers star LeBron James, who is a native of Ohio.

James shared an image of Reardon taken apparently following the shooting with his almost 50 million followers with a message: “YOU’RE NEXT.”

He tweeted the image, the text and a hashtag, which read: “#ACCOUNTABILITY.”

Shortly after James posted the dangerous and inflammatory message, he took the tweet down. The post was screen-grabbed prior to its deletion by numerous social media users. 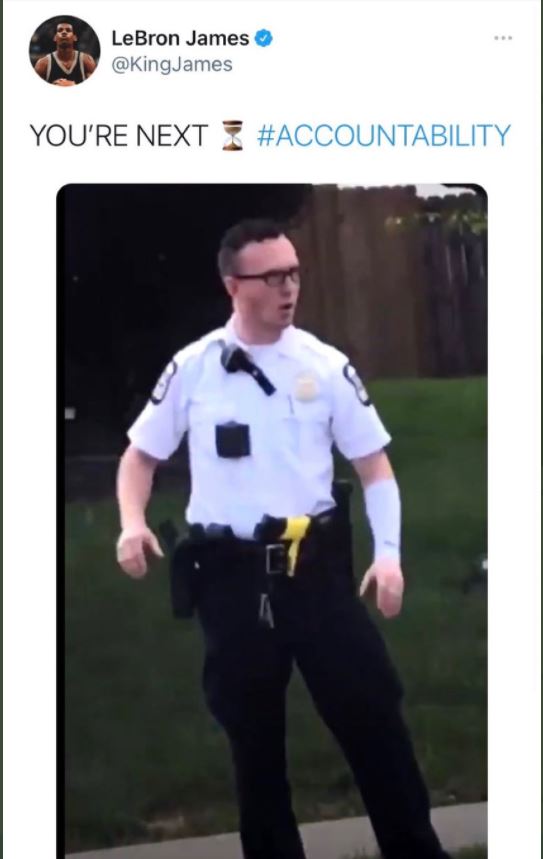 No comment about 13-year-old Nyaira Givens who was stabbed to death by another 13-year-old Black girl in Cincinnati Monday night.

No comment on the shooting death of 15-year-old Trevon Dickson who was shot to death in a gun battle with 15-year-old Nasir Ndiaye in Columbus Tuesday just an hour before the Ma’Khia Bryant incident.

No comment about the victim this out of control dingbat was trying to kill.

Black radicals are pretty selective about which “black lives matter”. The only ones that count are the ones that can be exploited for political points and riots.

What a fucking low-class act. I am thoroughly ashamed that this black racist moron is from my home state. Like many liberal celebrity athletes, James is a self-absorbed egotistical jack-off who doesn’t give much thought to facts or real-world problems.