We should be allowed to shoot anyone who makes practical arguments regarding COVID-19, according to one 2022 California congressional candidate.

On Monday, Cox responded to conservative commentator Matt Walsh on Twitter, writing, “Whenever anyone says ‘we all die from something’ (or a variation thereof) to justify not taking precautions to help protect others in this pandemic, we should be allowed to shoot them.” 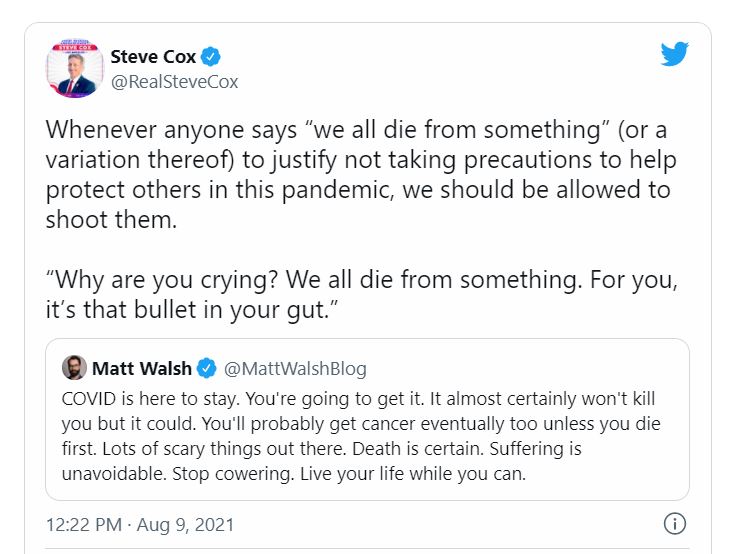 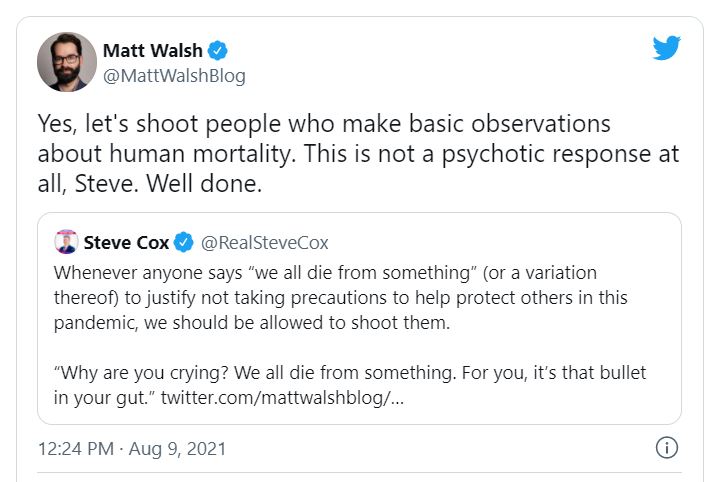 If you buy into the coordinated pandemonium coming from establishment media outlets and left-wingers, you might think that COVID-19 remains one of the greatest existential threats facing American existence today.

However, a quick look at the facts proves that, at this moment in time, the threat posed by COVID is negligible.

According to the Peterson Center on Healthcare, in June 2021, COVID-19 was just the seventh-leading cause of death in the U.S.

But those who wish to point out that fact deserve to be shot, according to Cox.

Unfortunately, this independent candidate is not alone in his beliefs.

Leftists have infected the country with their COVID propaganda, which has now left hundreds of thousands — if not millions — of Americans with an irrational fear of a disease that no longer poses more of a threat than cancer or Alzheimer’s.

Why has the left done this? It’s largely because people are now more willing to give the government power over their lives.

Buyt once the government has that power, it will never give it away.

Bring it, Cox. We shoot back. Unhinged assholes like Cox think death threats and intimidation will convince everyone to kowtow to the authoritarian vax dictatorship. Guess again.

This country was shut down over a virus with a 99% recovery rate. The people at greatest risk were those with pre-existing medical conditions and the elderly.  Healthy people with good immune systems who caught the virus regained their health after a week or two. Like yours truly.  The draconian lockdowns were devastating. 26 million Americans became unemployed.  People lost their jobs, homes, livelihoods, and businesses because of this induced panic. The economic impact will take years to overcome.

It was never about public health and safety; it’s about power and control.  Scientists and physicians who knew the virus was a politicized, fear-based narrative were censored from social media.

The government will never forget how easy it was to take control of your life; to control every event, restaurant, sports facility, classroom, church, and even if you are allowed to leave your house.

Remember that the next time the government manufactures a crisis.