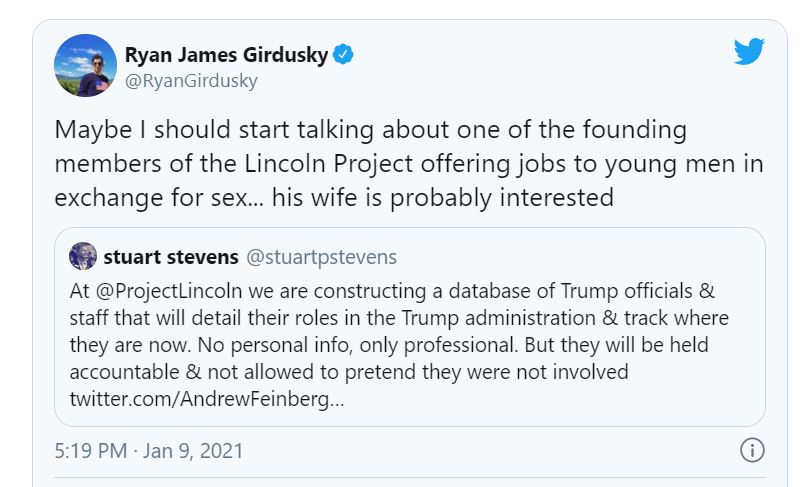 The Lincoln Project appeared to have scrubbed association with its co-founder John Weaver on its site after allegations that Weaver sent unwanted, uncomfortable and sexually suggestive messages to nearly a dozen young men.

A search of The Lincoln Project’s “Our Team” page, where Weaver was listed, leads to a page that doesn’t exist. An archive of the page shows that it existed as of January 11, and listed Weaver. Two days prior, journalist Ryan Girdusky said in a tweet that young men had sent him screenshots of predatory messages allegedly from Weaver, a political consultant who formerly worked for the John McCain presidential campaigns and then on former Ohio Gov. John Kasich’s presidential campaign.

Girdusky wrote in The American Conservative Monday that a man, whose identity he kept anonymous, claimed that he was in communication with several young men who Weaver solicited for a job, and then allegedly “propositioned them for sex as part of the offer.” In messages Girdusky said he reviewed, one man allegedly met with Weaver and had consensual sex, although Weaver allegedly never followed up with a job offer.

A college student reportedly claimed that Weaver began messaging him on Twitter, with potential internship offers. After persistent messages, the student told Girdusky that Weaver had called him after midnight, and on another occasion, asked the student about his height, weight, and build, making the student uncomfortable. When the student responded he was “about average” build, Weaver allegedly responded “oh my boy, I’m sure certain parts of you are well above average,” Girdusky reported.

The Lincon Project is a group of virulent ‘never-Trumpers’ and former Republicans-turned-leftwing tools. The organization includes unhinged luminaries George Conway, Rick Wilson, Steve Schmidt, Jennifer Rubin, and Bill Kristol.  The election of President Donald Trump sent them over the edge of the ‘woke’ cliff.  They’ve hooked up with wealthy left-wing operatives who donate to their cause. One of their latest tactics was to peddle Iranian lies meant to aid Biden.

They also compiled an “enemies list” of Trump officials and staffers.

And now, one of their co-founders is a sexual predator. Color me shocked.

Weaver is also a paid Russian agent of the same corporation that owns Hillary-connected Uranium One.

The merry band of idiots at the Lincom Project have no real connection or influence with the base of conservatives in America.

We’ll see what their response will be to Biden’s impending dystopia.