While the Burn Loot Murder thugs are rampaging at every perceived “racist” slight, their own deplorable crime and murder rate is skyrocketing.

Something called the George Floyd Justice and Policing Act passed the House yesterday. The legislation gives the Department of Justice the power to sue police departments if they disproportionately pull over a particular race or gender or gender. Pretty funny, considering that men commit almost all the crimes and always have throughout history. What does this mean in practical terms? What encourages cops to set up gender and race based quotas for traffic stops? Irrespective of what the people in the cars are actually doing in the crimes they’ve committed and the McDonald’s is the author of The War on Cops, which it seems like she joins us tonight to assess whether. Thanks so much for coming in. What do you think of this bill? What would it mean?

[00:25:21] Well, it means passive cops and emboldened criminals, Tucker, it’s based on the usual lie that racial disparities in policing are the result of police bias rather than criminal disparities in crime commission. Here are the facts about those crime disparities that the Biden administration in the Black Lives Matter industrial complex don’t want you to know. In New York City, blacks commit about three quarters of all shootings, even though they’re twenty three percent of the population. In Chicago, blacks commit about 80 percent of all shootings, though they’re less than a third of the population. In Los Angeles, blacks commit forty four percent of all violent crime, though they’re nine percent of the population. And in St. Louis, blacks commit 90 percent of homicides, though they’re four to six percent of the population. These disparities are replicated in every American city, and they mean that the police cannot go where crime is happening to protect minority victims without going disproportionately into minority neighborhoods and interacting disproportionately with black criminals. Cops don’t wish that reality. It’s forced on them by the facts of crime. But such targeted, data driven policing is the only way to prevent what happened last year, when over four dozen black children were gunned down fatally in drive by shootings. Now, thanks to this act and the philosophy behind it, which remains absolutely powerful in the land, cops are going to back off of that kind of policing. And what we’re going to see is a continuation of last year’s unprecedented increase in homicides.

[00:26:59] People in affluent neighborhoods will just hire private security as they did in the 80s. But you do wonder what happens to people who can’t afford it. I guess we know.

[00:27:08] The racism on the part of the left is incredible, Tucker. They seem to believe that if we talk about black criminals and black criminal offending, we’re talking about all blacks. That is not the case. We’re talking about criminals. The police are there to save the thousands of law abiding, good black entrepreneurs, senior citizens, children who are just trying to go to school. And by tarring them as racist, you’re consigning those people to terrible, fear driven lives that will stunt their ability to seize the opportunities that remain still abundantly available in this country.

[00:27:48] So obvious, even, by the way, Al Sharpton said something sort of like that this summer. This is only about assuaging the guilt of affluent white liberals and about not help and not helping anyone else. Heather McDonald, thank you for that. Appreciate it. Thank you, Tucker.

Her statement is backed by the Department of Justice: 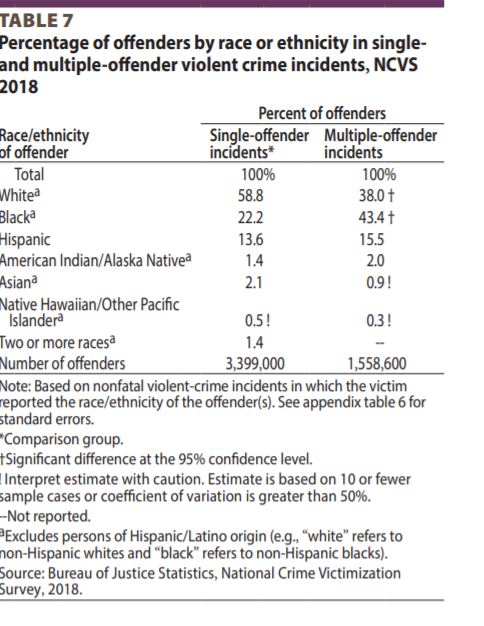