For six weeks, elementary school officials in Florida forced a medically exempt young girl with Down Syndrome to wear a mask by tying it around her head with nylon string, according to the girl’s livid father.

Jeffrey Steele is the father of his 7-year-old daughter, Sofia Steele who has an enlarged tongue and breaths through her mouth. He told Fox News that learned about the forced masking on Oct 7 when she arrived home on the school bus with a saliva-soaked face mask tied tightly around her head.

However, due to his nonverbal daughter being medically exempt from the in-school masking, he had never sent her to school with a facial covering.

Steele explained that his daughter has an individualized education plan, known as an IEP and the school officials are required to discuss any changes to the plan with the parent. In this case, the school never reached out to him or his wife to mention or seek approval before strapping a mask to her head.

……Steele believes that school officials had been removing her mask before loading her up on the school bus but apparently had forgotten on Oct. 7.

“I was just flabbergasted,” Steele said.

After seeing “big behavior changes in Sofia at home,” the girls parents had previously reached out to the school. They were informed that she had been removing her shoes at school.

“Removing her shoes?? Nice way to deflect from the trauma they inflicted on that kid.

A report by the Odessa Accountability Project claims that a 17-year-old COVID patient suffering from breathing difficulties entered a hospital in Texas, only for staff to place a plastic bag over her head after she removed her face mask.

A photo of the teenager posted to the group’s Facebook page shows the young woman with the bag, which features the words “equipment cover,” placed over her head and upper body. She is also wearing a face mask.

You don’t need to be a doctor to know the dangers of putting plastic bags over people’s heads, especially if they are already suffering from breathing difficulties.

The young woman was “humiliated and dehumanized by the staff” for apparently removing her face mask.

“The girl’s mother said she complained of not being able to breath well, taking off the mask, and was asked to put it back on,” states the post.

“The bag was over her head for roughly 30 minutes and she was instructed to save the bag for future use throughout the hospital.” 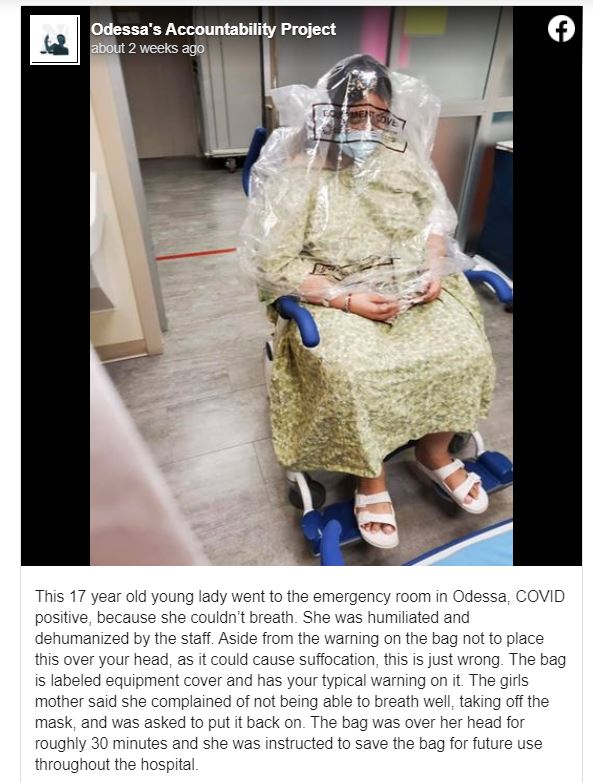 Teachers at a Colorado Springs middle school forced children to tape masks to their face in what is being described as an act of “child abuse.”:

Conservative commentator Michelle Malkin highlighted the case of 6th grader Rylee M., who texted her mother to tell her that a teacher had given her a warning then handed her blue painter’s tape to seal the mask to her face.

According to Rylee, at least one other student was forced to perform the same humiliating and potentially dangerous procedure because the teacher insisted their masks were not being worn “properly.”

Rylee’s mother asserted that forcing kids to muzzle themselves in increasingly uncomfortable ways could cause long term psychological damage.

“It’s developing some sort of mentality in our children where that kind of restraint over your face [is normal],” she said. “Your face is you, that is how people know you, they are just doubling down on hiding you and not letting you breathe, and it just conformity to the extreme.”

Another parent, Tori Skeldum, backed up her claims.

“[My daughter] said the teachers were wearing the masking tape around their wrists like bracelets and whenever someone’s mask would fall down they would tape them,” Skeldum said. “It’s sad that our world is coming to this and teachers would think it is ok.”

Officials at the Chinook Trail Middle School are now conducting an “internal investigation” into the incident.

I hope those schools and the hospital get sued into bankruptcy.