“Tolerance will reach such a level that intelligent people will be banned from thinking so as not to offend the imbeciles.” 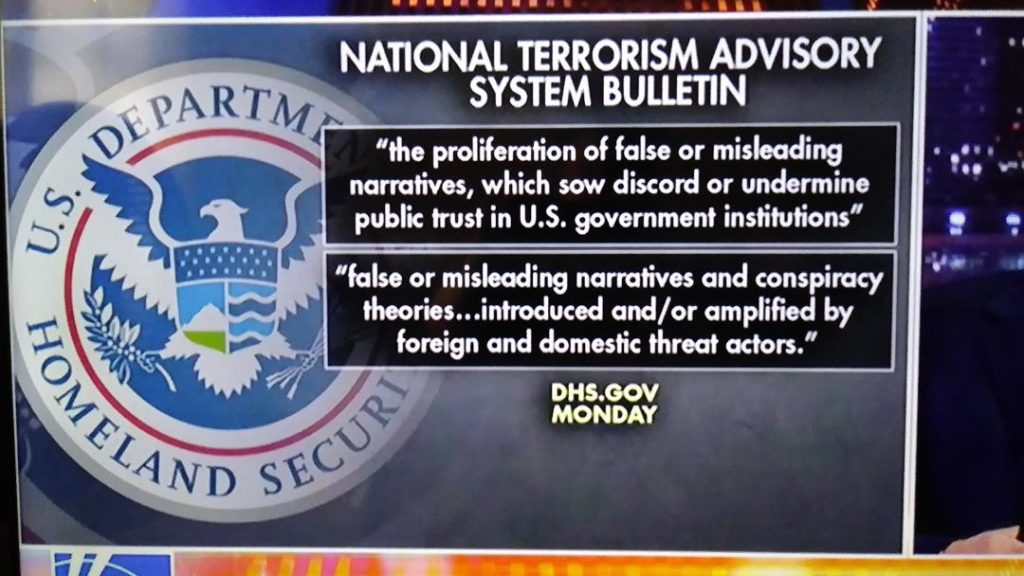 In New York, where the Democrat-controlled legislature is clearly out of control, a bill has been proposed, according to Conservative Playlist, which would criminalize the promotion of content that “includes a false statement of fact or fraudulent medical theory that is likely to endanger the safety or health of the public.”

That of course depends on who (or what federal agency) is deciding what is “fact” and what is not.

The legislation has not yet advanced from committee, is designed to “focus[es] on the active choices these companies make when implementing algorithms designed to promote the most controversial and harmful content,” Hoylman’s office said.

Hoylman only spoke about the alleged use of social media to “plan a riot at the U.S. Capitol,” while ignoring groups such as Antifa and Black Lives Matter, who routinely used platforms such as Twitter in 2020 to conduct riots in cities across the United States.

Because clearly, his bill is designed to punish political opponents of Democrats.

Apparently, the only “data” which is acceptable for the tech tyrants and Democrats is that which furthers their tyrannical objectives.

Hoylman’s office claims that prioritizing such content “has real life costs to public health and safety. So when social media push anti-vaccine falsehoods and help domestic terrorists plan a riot at the U.S. Capitol, they must be held accountable.”

Under the proposed legislation, New York’s attorney general and lawyers for New York municipalities would be able to bring either state or federal lawsuits to punish violations, as well as by individuals, businesses and associations harmed by alleged violations to sue for damages.

While the bill “appears” to target social media companies and their algorithms, the bill would also apply to individuals who post content deemed “likely to endanger” the public. This is chilling.

That wasn’t lost on Jonathan Turley, George Washington University law professor, who referred to Hoylman’s rationale for the legislation as “perfectly Orwellian. It treats the failure to censor as being a participant in ‘disinformation.’” Turley called Hoylman’s press release a “mix of algorithmic conspiracy theory and anti-free speech doublespeak.”

In a blog post, the highly-respected Turley wrote that Hoylman’s bill would criminalize whatever is believed to be false at the time, “despite the continuing debates over issues like the efficacy of masks or vaccine protocols. Absurd claims of the law or science” are far less dangerous than “rising levels of censorship,” he wrote.

Even George Orwell wouldn’t believe how prophetic he was all those years ago.

The Department of Homeland Security has announced that American citizens who challenge authoritarian covid measures and question the integrity of elections are now “domestic terrorists”. Biden’s FBI wants you to turn in your “extremist” relatives and friends.

Government abuse of power is more dangerous than any virus.

Big Tech is engaging in a campaign of communist-style oppression by deplatforming the sites they disagree with politically and ideologically.  Twitter, Facebook, YouTube, and Google have made a concerted effort to squelch any reporting about the massive voter fraud and ballot tampering and any debate over the covidiocy hysteria and vaccine.

Ironically, a nonprofit organization that “works to defend and celebrate free expression in the United States and worldwide through the advancement of literature and human rights” has jumped on the thought control bandwagon:

In 2011, B. Hussein Obama launched an “Attack Watch” department to supplement his Ministry of Truth, which was created to counteract “unfavorable stories”.  His media tools at MSNBC  were all too glad to oblige. One notable event took place during an MSNBC ‘Morning Joe’ broadcast, which featured a discussion of the White House targeting Fox News. An email arrived from the White House on the air to ‘correct them’ about an exchange between former WH spokesperson Robert Gibbs and Jake Tapper. One of the commentators, Mika Brzezinski actually made the ‘correction’.

There are some powerful free speech alternatives to social media sites owned by left-wing overlords.  One of them is GAB. They are gaining popularity with millions of members who are fed up with the censorship of Facebook and Twitter. The Left is not pleased. Big Tech is doing everything it can to censor speech it doesn’t like.

Facebook created a process to monitor the offline behavior of its users to determine if they should be categorized as a “Hate Agent.”

The real danger is the hostile leftwing media, corrupt Dems, and their weaponized government agencies that target American citizens at their bidding.