The fucking FBI concealed it.

In a live chat released on Monday, Catherine Engelbrecht and Gregg Phillips appeared together on “truethevote.locals.com” to discuss their 15-month involvement with what was characterized to them as a “counter-intelligence operation” with the Federal Bureau of Investigation into American election company Konnech Inc.

Konnech, based out of East Lansing, Michigan, builds software to manage the poll workers, poll locations, campaigns, assets, and supplies necessary to run elections in the United States, Canada, and Australia.

In January 2021, Phillips said that the cyber analyst he had been working with encountered an “oddity in some of the URLs” such as vote4la.com, vote4detroit.com, and vote4boston.com, which Konnech’s “PollChief” software application used to gather personally-identifying information about poll workers.

Using Binary Edge, a software product companies use to identify and assess the risk of cyber breaches, “We began to look at where do these URLs resolve to. We found that most of them resolve to one I.P. address and that I.P. address — the URL resolved in China,” Phillips said.

“What we also learned in our review, apps.konnech.com [.net], resolved into this same URL in China, meaning that the application itself was residing in China,” he continued.

“In Binary Edge, you can figure out what type of database they are using, their database port, and all the different services offered by ports in this particular application living in China. It turned out that not only did it live there, but they left the database open.”

This database “stored the personally identifying information of over a million Americans,” he emphasized.

Engelbrecht and Phillips decided that “this was a major national security risk” and immediately took the information to the FBI.

……The FBI agents indicated that Konnech had already “been on their radar” and that there were “lots of other problems” with the U.S. election company, including “banking issues” and problems involving the company’s overseas operations in “Australia” and “Canada.”

In April 2022, Engelbrecht received a call from one of the FBI agents, who informed her that the FBI’s “Washington D.C. headquarters” was now involved in the investigation.

Engelbrecht described how everything changed after this call, “There was no more goodwill, there was no more let’s work together, the script had been flipped, and now we were the target,” she said. “That was a very disturbing call.”

Just one day after the New York Times attempted to downplay suspicions around the election software company Konnech, the company’s CEO, Eugene Yu, has been taken into custody under suspicion of sending data on American poll workers to Communist China.

On October 3, the New York Times published an article by reporter Stuart Thompson titled “How a Tiny Elections Company Became a Conspiracy Theory Target,” in which he claimed that “election deniers” were targeting Konnech, a Michigan election software firm with just 21 U.S. employees, and had developed a theory with “threadbare evidence” that the company had tied to the Chinese Communist Party and had given the Chinese government backdoor access to the personal data of around two million poll workers in the United States.

Thompson suggested that such beliefs were ridiculous and anyone suggesting there was validity to these claims was simply an “election denier,” spinning conspiracy theories. 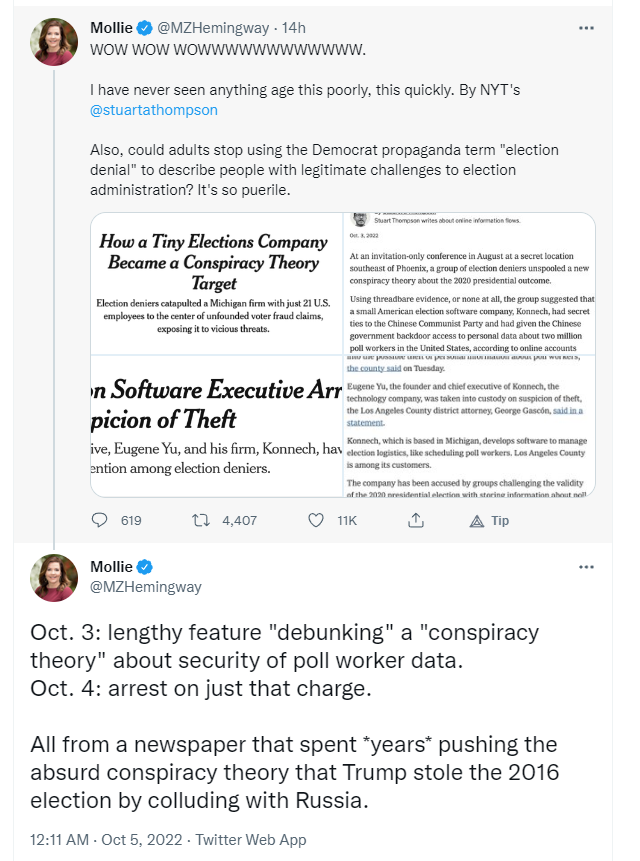 On October 4, just one day later, the NYT published another article from Thompson titled “Election Software Executive Arrested on Suspicion of Theft,” in which he reported that Eugene Yu, the CEO of Konnech, had been arrested under suspicion of theft after U.S. user data was found stored in China — exactly what the “election deniers” that Thompson had derided claimed.

Los Angeles County District Attorney George Gascón, commented on the situation saying: “Data breaches are an ongoing threat to our digital way of life. When we entrust a company to hold our confidential data, they must be willing and able to protect our personal identifying information from theft. Otherwise, we are all victims.”

In a statement, a spokesperson for Konnech said that the company was attempting to learn the details “of what we believe to be Mr. Yu’s wrongful detention,” and that it stood by recent statements it made in a lawsuit defending its handling of user data.

Just think, the DHS published a list of ‘terror threats’, which included citizens who question the integrity of elections.

The ChiComs have their claws into this country pretty deep. They’re buying up land next to military bases.

The government and American businesses are treating Beijing like a business partner. The Chinese have engaged in cyber attacks, spying, economic espionage, and actual threatening of U.S. Naval vessels. Yet these traitors think giving them money, technology, and contributing to the Chinese threat are good ideas.

Propping up a communist totalitarian regime with capitalist dollars is suicidal. China is an enemy and should be treated as such instead of having the privilege of being a business associate.  Doing business with a communist country will not transform it into a freedom-nurturing society.