Bottom line: the FBI colluded with the State Department to protect Hillary.

The trove of documents turned over by the FBI, in response to a lawsuit by the transparency group Judicial Watch, also included discussions by former FBI lawyer Lisa Page concerning a potential quid pro quo between the State Department and the FBI — in which the FBI would agree to effectively hide the fact that a Clinton email was classified in exchange for more legal attache positions that would benefit the FBI abroad, and allow them to send more agents to countries where the FBI’s access is ordinarily restricted.

The quid pro quo would have involved the FBI providing some other public reason for withholding the Clinton email from disclosure amid a Freedom of Information Act request, besides its classification level. There are no indications the proposed arrangement ever took place.

And, in the face of mounting criticism aimed at the FBI, the documents revealed that Comey quoted the 19th century poet Ralph Waldo Emerson by assuring his subordinates, “To be great is to be misunderstood.”

The FBI did not respond to Fox News’ request for comment on the released emails.

There’s no misunderstanding your corruption, douchebag.

An FBI employee who texted with her in-house lover about blocking Donald Trump’s presidential ambitions wrote in 2016 of a ‘quid pro quo’ with the State Department to hide the fact that an email found on Hillary Clinton’s home-brew email server was considered classified.

Lisa Page fretted in the closing days of the presidential campaign about a pending Freedom of Information Act disclosure of a discussion between top State and Justice Department officials about the potential trade.

Under the arrangement, the State Department would have given the FBI more legal attachés for its overseas division in exchange for altering the basis for keeping one of the Clinton emails from the public.

At the time, the email in question was exempt from FOIA requests because it was classified – a fact that was ultimately made public. The FBI had asked the State Department to ‘change the basis of the FOIA withhold [decision] … from classified to something else.’ 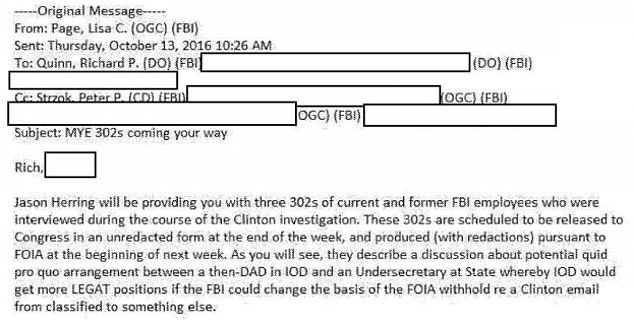 ……The plot was never consummated. But Page, an FBI lawyer, was worried enough about it at the time to alert her colleagues that other employees had told investigators about it.

One of those colleagues was Peter Strzok, the married FBI agent she was having an affair with.

‘Jason Herring will be providing you with three 302s [witness interview reports] of current and former FBI employees who were interviewed during the course of the Clinton investigation,’ Page warned.

‘These 302s are scheduled to be released to Congress in an unredacted form at the end of the week, and produced (with redactions) pursuant to FOIA at the beginning of next week.’

‘As you will see, they describe a discussion about potential quid pro quo arrangement between then-DAD in IOD [deputy assistant director in the FBI’s International Operations Division] and an Undersecretary at the State Department whereby IOD would get more LEGAT [legal attaché] positions if the FBI could change the basis of the FOIA withhold re a Clinton email from classified to something else.’

An intel dump by the FBI shows the extent of Comey’s and Lynch’s Cover up of the Hillary email investigation.