Why is this motherfucker still breathing? He received the death penalty. It should have been carried out already.

The former U.S. Army major and self-described “soldier of Allah” behind the deadly 2009 massacre at Fort Hood cheered the resurgent Taliban ’s takeover of Afghanistan in a letter obtained exclusively by the Washington Examiner.

Writing from death row at Fort Leavenworth , Nidal Hasan boasted “We Have Won” and congratulated the Taliban. Hasan, who gunned down 14 people and wounded 43 more, urged the nascent terrorist government to implement its brand of brutal oppression under the guise of religion. 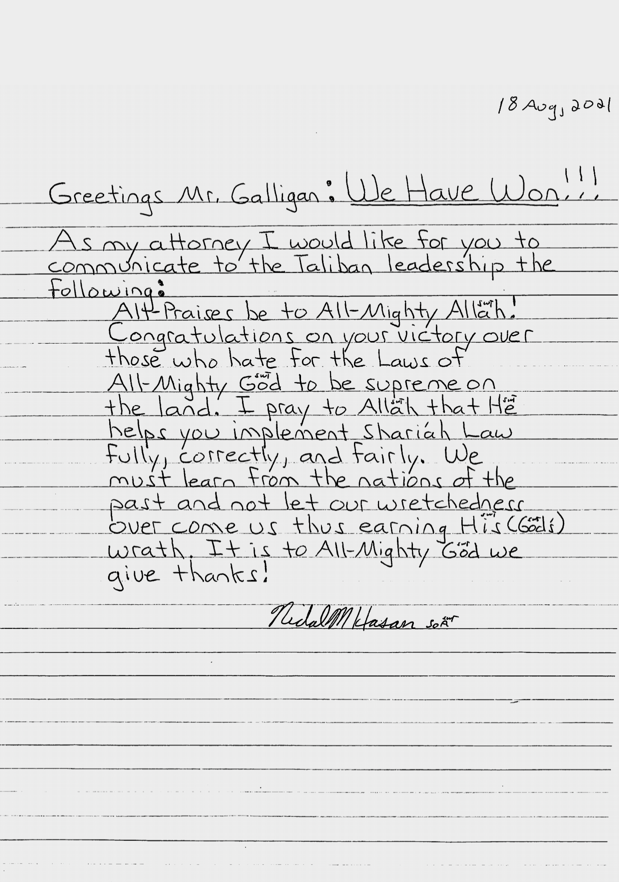 Take this piece of shit out and fill his carcass with as many bullets as he used to kill his victims.

Hasan’s bloody attack would have been prevented if the United States Army didn’t create an environment of fear-based political correctness. The mutherfucker spewed Islamic rhetoric during briefings, signed his emails with “Praise Be to Allah,” and told a female supervisor she was an infidel who would be “ripped to shreds” and “burn in hell” because she was not muslim.

But, no one took it up through the chain of command because Gawd forbid that they violate some EO reg and “offend” someone.

This is the same Army hierarchy that refuses to acknowledge radical muslims in the ranks and kowtows to Islamic extremism, but will not hesitate to persecute those who espouse Judeo-Christian philosophy.  During deployments to Afghanistan, Soldiers were forbidden to  criticize the Taliban, Islam, the muslim male propensity for pedophilia, or the way they oppress women.

The irony is, that unlike the DOD, he has a very clear understanding about the mission and the goals of Islamofascism. They want a world Caliphate, and they are serious about it. Bin Laden’s death hasn’t deterred them one bit.

Nidal Hasan went ahead with his jihad because he could.