Another hypocritical Hollywood libtard with an armed body guard and a cause.

Via the Gateway Pundit.

Actor/comedian Jim Carrey took to twitter recently announcing his plan to release a song titled “Cold Dead Hand.” In his song he rants against our right to bear arms and the “heartless motherf*ckers unwilling 2 bend 4 the safety of our kids.”

Carrey exploits tragedy to push the liberal Hollywood agenda of gun control.
However, this same actor has used firearms in several movies for acts of violence, intimidation, and murder.
And… to make a buck.

The orifice that functions as Carrey’s piehole:

Which was promptly spanked by Dana and Chris Loesch, as well as others:

I see #AnswerTheQuestionJim is trending. May want to answer this question, @JimCarrey : will you denounce ur film based on anti-gun remarks?

If you haven’t been paying attention to the epic fact-whoopin @DLoesch has been putting on the Dumb & Dumber star you are missing out!

Don’t tell @JimCarrey that Newtown parents voted for armed police in their schools. He might start calling them “m*therf*ckers,” too.

@JimCarrey could you please let @DLoesch and all of us know what type of gun you are brandishing here for profit? pic.twitter.com/FsQU4DyTac 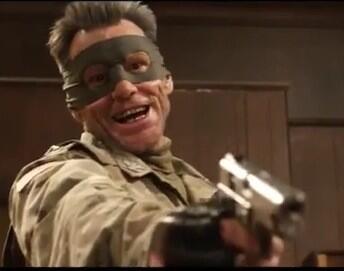 Ann Coulter sums up the liberal elites who can afford to hire armed bodyguards, live in the best neighborhoods, and direct us peons on how to live from the comfort of their Ivory Towers:

According to the Left’s set of rules, some are more deserving of the Second Amendment than others.

1 thought on “Note to Jim Carrey: Stick to Overacting and Leave Gun Ownership to the Adults”