Via Liz Peek at Fox News

President Trump bungled the Helsinki press conference. Of that there is no question. But were his comments treasonous, as former CIA chief John Brennan said? Or was it, as John McCain thundered, “one of the most disgraceful performances by an American president in memory?”

Trump’s critics responded with customary vitriol and excess, attacking the president in such extreme terms that his supporters only dig in even deeper. Democrats and never-Trumpers cannot help themselves; over the past two years, the public has grown weary of the non-stop, five-alarm fires, and they have tuned out.

To be sure, President Trump missed an opportunity to publicly and sternly warn Russian President Vladimir Putin against interfering in future U.S. elections. Just as importantly, he never articulated why it was crucial to reset relations with Russia, as every preceding administration has tried to do. He failed to describe the many arenas in which the two countries could work together.

But really, did anyone really expect him to declare the Russian leader a liar on global TV? What would have been the point of traveling to Helsinki and arranging a summit between the world’s two biggest nuclear powers, only to scuttle the chance at a new and improved relationship? It wasn’t going to happen, and in fact Trump hinted at that beforehand, when he told reporters not to expect “a Perry Mason” moment.

Critics were most irate that Trump, in answering a question, didn’t unreservedly say that he trusted our intelligence agencies more than Putin. On the other hand, that would have amounted to calling Putin a liar to his face. And, let’s face it, as the months have passed and the politically conflicted behavior of James Comey, Andrew McCabe, Peter Strozk and company have come to light, one may forgive the president for not leaping to the defense of the FBI, at least.

After all, he was probably outraged, as all Americans should be, that the Justice Department chose — just three days prior to the summit — to release the indictments of 12 Russians accused of hacking the Democratic National Committee and other Democratic organizations. It certainly appeared to be an effort to undermine the president’s meeting with Putin, or at least a not-so-gentle reminder from special counsel Robert Mueller that Trump’s relationship with Putin was still being investigated. That seems like an act of gross insubordination.

……We do not know what President Trump and President Putin discussed in their two-hour, one-on-one meeting in Helsinki. We do not know what concessions the former KGB officer may have made, or what the former billionaire real estate mogul asked. We may never know how hard Trump pushed Putin on the hacking of the DNC and other intrusions into the U.S. democratic process.

But, we do know that since taking office, President Trump has taken a much harder line on Russia than did his predecessor. President Obama visited Moscow in 2009 and soon thereafter abandoned a missile defense system in Poland and the Czech Republic that infuriated Russia. Trump has since reinstated the program. Obama refused to send military-grade weapons to the Ukraine; Trump is doing so. Obama was reluctant to ramp up liquified natural gas exports that would compete with Russian gas, but Trump is prioritizing such shipments and calling out Germany for its reliance on Russian energy.

Trump has surrounded himself with Russia hawks like National Security Advisor John Bolton and Defense Secretary James Mattis. If he were in cahoots with the Kremlin, he has a funny way of showing it. 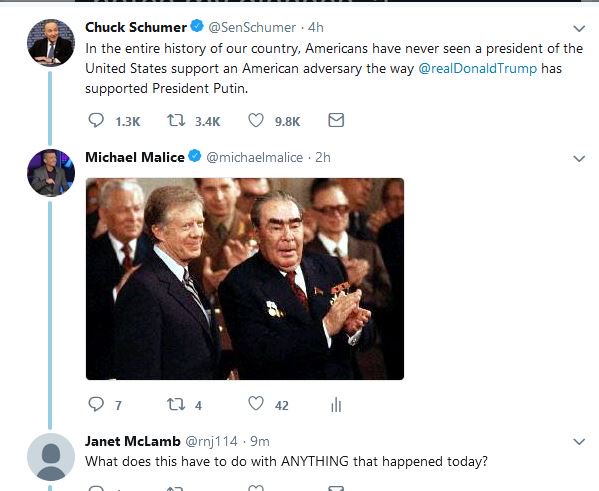 The Dems outdid any attempt by the Russians at ‘meddling’.

The leftwing Deep State really didn’t believe Trump would win the election. As an ‘insurance policy‘ during the campaign, the FBI, James Comey, the Hillary campaign, a reprobate former MI6 agent, and the Obama regime all had a hand in producing and paying for a lurid, fabricated dossier which was then used to secure a warrant from the FISA court under fraudulent claims, to spy on the Trump campaign.

Former MI6 operative, Christopher Steele, was hired by Fusion GPS, a corporate espionage firm, to dig up dirt on Trump but came up with a fabricated smear instead. Not deterred by the total implausibility of the story described in the dossier, GPS shopped the dossier to the liberal media and paid journos to feed the fake story to the press with predicable results; the left wing morons at Buzzfeed and  CNN  jumped at the chance to print the fake news.  The FBI even offered $50,000 to Steele for information.

The Obama regime paid almost one million dollars to the same law firm that funneled money to GPS.  Somewhere in that mess is RINO John McCain,  who received the dossier from a former British ambassador to Moscow.

Russia certainly has the capability to cyber hack, but I guarantee that Hillary’s corruption, and the flood of leaked emails from WikiLeaks,  which showcased the vulgar bigotry and dismissive arrogance, of Podesta, the DNC, Hillary, Hillary’s aides, and the lapdog media, were the catalyst that convinced even  undecided voters to reject her.

Speaking of influencing elections, Barky tried his hand in Israel’s election , in a bid to oust Benjamin Netanyahu. It failed.

Hillary’s Clinton Foundation made quite a tidy sum from the Russians to the tune of $145 million in donations from people connected to the uranium deal.

An FBI informant stated that the Russians wired millions of dollars to the U.S. to influence Obama and Hillary.

As far back as 1983, Ted Kennedy offered to work with the Soviets to undermine Ronald Reagan’s efforts to protect America and defeat communism.  This goes way beyond political differences and disagreements. It’s sanctioned treason.