Buck the racial brainwashing and get penalized.

A father from an affluent town in Maine is barred from attending his daughter’s graduation ceremony after publicly criticizing the local school board.

On May 15, police handed father Shawn McBreairty a “prohibitive conduct warning” informing him that he is no longer allowed on local school district property. McBreairty needs clearance from the district’s superintendent to attend on-campus events. Violation of this order could result in arrest.

McBreairty told The Daily Wire that the conduct warning was served because of his ongoing fight with Cumberland’s Maine School Administrative District 51 (MSAD51) school board, which began in June 2020. MSAD 51’s Superintendent Jeff Porter claims that McBreairty was served with a warning for “padlocking a huge wooden-backed billboard to a school fence without permission.”

Following the death of George Floyd, Porter and the district’s “Equity Leadership Committee” emailed out an equity statement. McBreairty — who described himself as publicly apolitical prior to his school board fight — said that he found the email incredibly divisive and partisan.

“In a culture that continually reinforces white supremacy, justice can only be achieved when we confront and repair the anti-Blackness woven through every aspect of society — in our homes, schools, workplaces, communities, places of worship, and government,” the email reads.

The email received backlash from community members, including McBreairty, who found the terminology used to be offensive and partisan. Following complaints, the superintendent emailed parents encouraging them to stay open-minded to the partisan teaching.

“The committee’s statement earlier this week reflects its mission to educate all stakeholders that ‘equity is a dynamic system that addresses past and present inequalities and constantly evaluates conditions to ensure that all people have unhindered access to the resources and opportunities that enable them to thrive,’” Porter said. “This being said, I realize not everyone is going to receive the message in the way it was intended. I also recognize that some of the terminology may have felt confrontational, such as ‘white majority’ and ‘white supremacy.’”

In the same email, Porter announced that the school district had hired Boston-based Community Change Inc., a diversity, equity, and inclusion consulting firm. The firm holds far-left views and advocates for the destruction of capitalism. In a June newsletter, the firm said, “If we say we are committed to ending white supremacy, then we must also end capitalism.” According to Porter, the district has since ended its relationship with Community Change Inc.

McBreairty told The Daily Wire that by September he had become an active parent at school board meetings and was advocating for increased transparency in the curriculum. The father of two said that he knew what critical race theory was and became fearful that Community Change Inc. would promote the divisive theory in the classroom.

McBreairty claims that the school board’s equity lead, Ann Maksymowicz, tried to silence him and others for opposing critical race theory. At one meeting, a community member used a three-minute comment period to recite the Pledge of Allegiance. Maksymowicz refused to stand for the Pledge and McBreairty snapped a picture.

Maksymowicz claimed that the picture was no longer a form of free speech, but a form of harassment. The school board member came up to McBreairty’s door and asked his wife to remove the sign. Instead, he opted to get an even bigger sign. 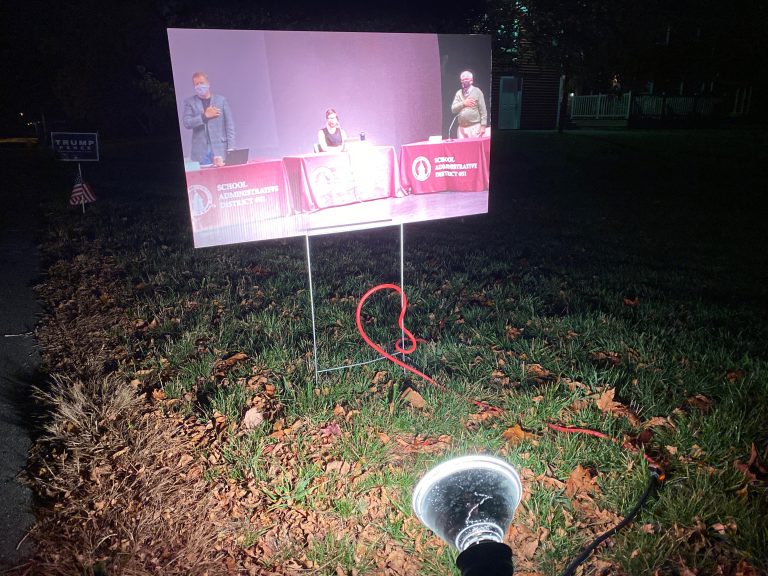 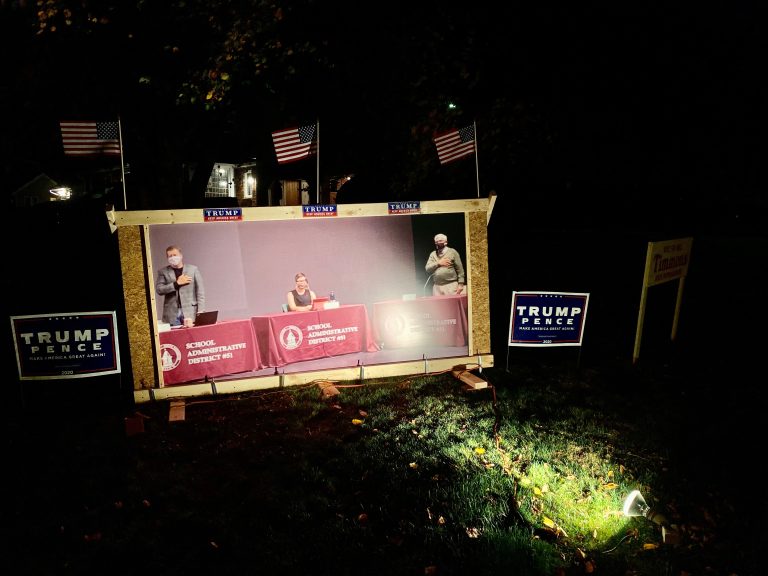 The triggered tyrants on the school board didn’t like his opinion so they whined on social media:

In a GoFundMe to “counter harassment” of school board members, Maksymowicz said that the Cumberland Police Department (CPD) served her with a “criminal trespass warning” for being on the McBrearity’s property.

“Being a responsible adult I left a note asking for the sign to be taken down and informing them that it was harassing to me,” Maksymowicz said. “I returned the following day and spoke with the wife of the sign’s owner. By that afternoon CPD had served me with a Criminal Trespass Warning.”

The fighting continued between the school board and McBreairty for months. By January 2021, McBreairty removed the sign of Maksymowicz and focused his efforts on filing Freedom of Information Act (FOIA) requests to reveal the scope of critical race theory in MSAD51 schools.

In November, local activists placed a bed sheet on the fence at the middle school across the street from McBreairty’s house. “Honk if you support the school board,” the sign read. McBreairty told The Daily Wire that people were showing up at 2:30 a.m. to blare their horns in support of the school board. The sign remained for about one week.

In response, McBreairty put the poster — which Porter claims was a billboard — of Maksymowicz on the same fence. Within an hour the police had responded and a maintenance man from the school district removed and withheld the sign. McBreairty was served with a “prohibitive conduct warning” shortly after.

McBreairty said that despite threats of being arrested, he fully intends on attending his daughter’s graduation on June 6. According to Porter, he has sent two emails to the district’s superintendent requesting that he be allowed to attend.

Porter told The Daily Wire that reporting on McBreairty’s fight with the school board is “reckless” because he deems the father “someone who is unstable.” Porter claims that McBreairty can attend graduation “pending his conduct.”

“I did respond to Mr. McBreairty that his request to attend graduation was pending his conduct between now and graduation,” Porter said.

Ann Maksymowicz did not respond to request for comment.

……This article has been updated to include comment from Porter, including comment about the dispute with McBreairty and the end of the district’s relationship with Community Change Inc. It has been corrected to note McBreairty sent two emails to Porter rather than several.

“Critical Race Theory” is not a legitimate course of teaching.  It’s just another politically motivated racial wedge to drive between people.  It’s how the Dem Party caters to minorities via the bigotry of low expectations.

Anyone who objects is labeled “reckless” and “unstable”.

If he’s not allowed into the graduation, he needs to file a gigantic lawsuit.