The Multnomah County District Attorney’s Office has filed charges against four out of the five suspects arrested when hundreds of Antifa rioted in downtown Portland for the anniversary of George Floyd’s death.

On Tuesday night, more than 200 people gathered outside the Justice Center in response to a pre-announced direct action by Antifa. Most of the people were dressed head to toe in black. The mob proceeded to attempt to light the Justice Center on fire by pushing a large dumpster against the building and setting it alight.
“Several people used umbrellas to conceal their actions and lit a fire in the dumpster at about 9:21 p.m. while people chanted to burn the building down,” Portland Police said in a press release.

The Justice Center is occupied by city staff, police and jail detainees. The facility was broken into and set on fire a year ago in response to Floyd’s death.

Portland #antifa tried to burn down the Justice Center tonight to commemorate their burning of the same occupied facility a year ago. #BLM pic.twitter.com/jZW8mIwIl1

Responding police on Tuesday night were pelted with frozen water bottles, eggs and metal spikes. Police declared the gathering a riot. After the flames were put out by firefighters, the rioters moved across the park to City Hall, where they smashed the windows and left anarchist and anti-police graffiti. They then proceeded to break into numerous downtown businesses. 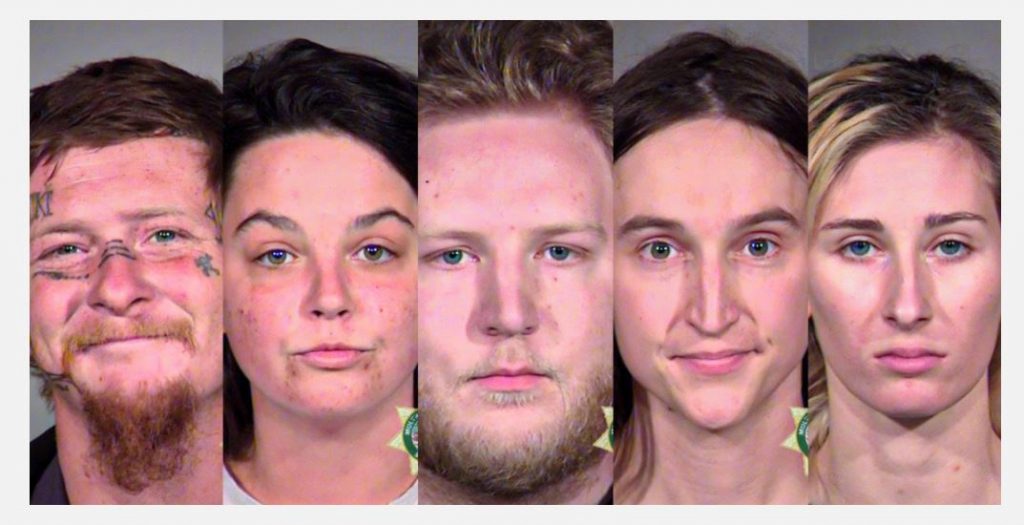 Jarrid Bailey Huber, 21, was charged by police with felony first-degree arson, five felony counts of first-degree criminal mischief, felony riot and second-degree criminal mischief. He was quickly released without bail. The Post Millennial reported last month that Huber has ties to the Antifa death threat video against Portland Mayor Ted Wheeler, which caught the attention of the FBI.

Emery Rose Hall, 30, was charged by the district attorney with felony riot and second-degree criminal mischief. She is accused of smashing multiple windows at City Hall. She was quickly released without bail. Hall is a self-described transsexual “witch.” She was formerly known as Gordon Hall.

30-year-old Elizabeth Sue Hall, a relative of fellow riot arrestee Emery Hall, was also charged with felony riot and second-degree criminal mischief. She is accused of smashing up City Hall.

Jacob Myers, 22, was charged with felony first-degree criminal mischief. The district attorney has also slapped Myers with felony riot. Myers is accused of smashing windows in downtown. His indictment is scheduled for June 16. In an unrelated criminal matter, Myers has an extradition case against him for being a wanted fugitive.

Rhiannon Millar-Griffin, 23, was charged by police with felony first-degree criminal mischief and felony riot. At the time of her arrest, she was wearing the black bloc uniform. She was quickly released without bail. Within less than 24 hours, both her charges were dropped.

……Millar-Griffin was previously arrested at another Antifa riot in August 2020 when hundreds of rioters sieged the Portland Police’s north precinct. Far-left militants set the building on fire and attacked responding officers trying to extinguish the flames. Rioters threw sharp ceramic chunks, large screws, rocks, paint bombs and feces at law enforcement that night. Millar-Griffin’s charges of disorderly conduct and interfering with an officer were dropped.

Notice that three of the criminals were released without bail and had charges dropped.  All six are violent repeat offenders who never got the jail sentences they deserved.

Most of the Antifa/BLM goons responsible for the destruction of businesses, police stations, and courthouses, have skated out of any legal consequences for their crimes.  The Feds refuse to prosecute. Violent anarchists still roam the streets, and they always make bail and pick up where they left off.

It was never about Floyd in the first place. It’s about animalistic thugs who have a propensity for violence and leftwing groups who fund this shit. All they need is an excuse.

In contrast, MAGA patriots who protested at the U.S. capitol on 6 January have been beaten and held in jail indefinitely.