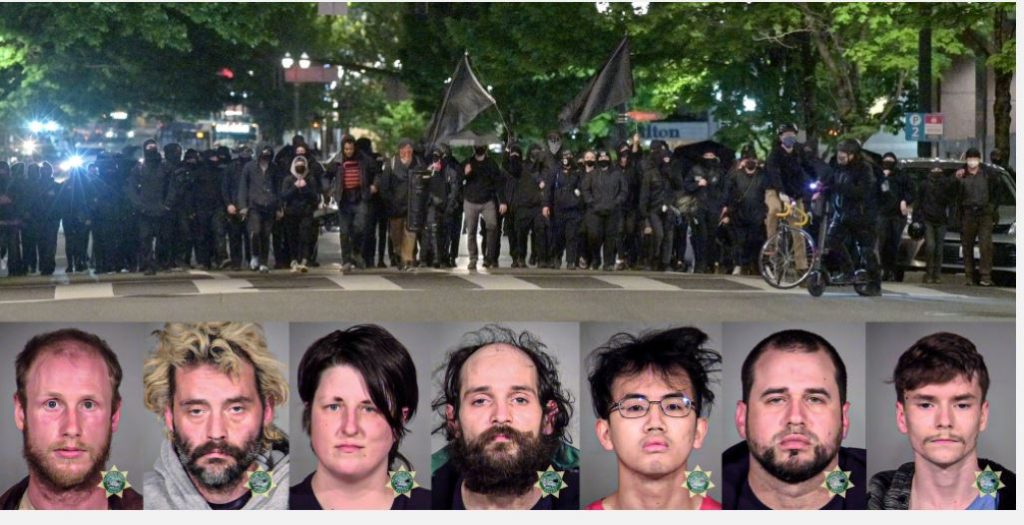 What a motley fucking bunch.

The Multnomah County District Attorney’s Office has announced it is moving forward with prosecuting three suspect rioters connected to the violent Antifa protests in Portland, Ore. on May Day.
On Saturday night, around 50 people in black bloc descended on the local Immigration and Customs Enforcement facility in a pre-announced riot. The facility is among one of many government buildings targeted and set on fire dozens of times over the past 11 months by far-left rioters. Five of the seven arrested over the riots have been previously accused of or convicted for their role in other Black Lives Matter-Antifa riots.

……In addition to the five arrested at the evening May Day riots, three others have been charged over a protest-related altercation in the street that occurred earlier in the day.

The group of filthy derelicts was arrested for crimes ranging from felony riot, brandishing knives at officers, felony first-degree criminal mischief, menacing, and disorderly conduct. Most of them are repeat offenders with prior arrests. Go figure.

Most of the Antifa/BLM goons responsible for the destruction of businesses, police stations, and courthouses, have skated out of any legal consequences for their crimes.  The Feds refuse to prosecute. Violent anarchists still roam the streets, and they always make bail and pick up where they left off.

In contrast, MAGA patriots who protested at the U.S. capitol on 6 January have been beaten and held in jail indefinitely.