There’s a certain demographic with a tendency toward violence and rampage. All they need is an excuse.

The cops involved in this will and should be charged with a crime.

Aside from that, hundreds of blacks kill each other every day (about 6,000 per year) and no one bats a fucking eye.

When a black muzzie cop in Minnesota shot and killed an unarmed white female there were no protests or riots. The cops destroyed evidence, the media ignored the case, and the black mayor sucked up to the local muzzie population.

At the Target in Minneapolis that was being looted tonight during the BLM riot, a woman in a wheelchair was attacked. pic.twitter.com/JxsXTB30xI

Inside a looted Target store, Minneapolis Minnesota, early morning hours of May 28 pic.twitter.com/dys87a8npC

The violence in Baltimore and Ferguson continues, courtesy of the black population.

Every time thugs “protest” in the form of riots, arson, and vandalism, their neighborhood should be left to rot. Taxpayers shouldn’t be burdened with the cost of repairing the damage done by these animals.

And this little lump of wasted flesh: 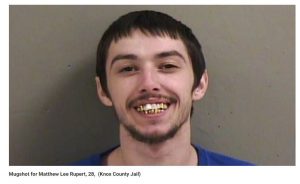 Federal prosecutors have arrested an Illinois man they say attended a George Floyd protest in Minneapolis, and recorded himself handing out explosives and saying “we came to riot.”

Matthew Lee Rupert, 28, of Galesburg, Ill., described by prosecutors as having “distinctive gold teeth,” was charged Monday with civil disorder, carrying on a riot and possession of unregistered destructive devices.

……They said the video he shot at the protest was more than two hours long and was posted to his Facebook account.

“In the video, Rupert passes out explosive he indicates he possessed, encourages others to throw his explosives at law enforcement officers, actively damages property, appears to light a fire a building on fire and loots businesses in Minneapolis,” the complaint says.

The complaint also quotes Rupert as saying “light that bitch and throw it at them” to another person. That person, the complaint says, lit a device and threw it in the direction of police.

The bitch should spend time in jail.

Congratulations, thugs. These are the people you hurt:

A black business owner who invested his life savings into what is now a looted and destroyed sports bar cried on camera as he lamented, “I don’t know what I’m gonna do.”