“Through its ad hoc, partisan suppression of media critical of Biden, [Twitter] is making illegal, corporate in-kind contributions as it provides unheard-of media services for Joe Biden’s campaign,” reads the RNC complaint, first obtained by Fox News. The complaint accuses Twiter of violating federal campaign finance law and urges the FEC to “impose the maximum penalty allowed under the law.”

The RNC filed the complaint after The New York Post published a blockbuster story about a “smoking gun” email allegedly proving that then-Vice President Joe Biden’s son Hunter introduced the VP to an executive at the notoriously corrupt Ukrainian gas company Burisma — before Joe Biden pressured the Ukrainian president to fire a prosecutor looking into Burisma. This email appears to disprove Joe Biden’s repeated claims that he never discussed Hunter Biden’s foreign business deals with his son.

……Twitter CEO Jack Dorsey admitted it was “unacceptable” for Twitter to block URL sharing via tweet or direct message “with zero context as to why we’re blocking.” Yet he nevertheless argued in favor of restricting the article on Twitter, claiming it violated the company’s “Hacked Materials Policy.”

Yet, as PJ Media’s Matt Margolis pointed out, Twitter took no such comparable action against numerous stories that arguably fall under the Hacked Materials Policy, such as Trump’s tax returns.

The RNC filing called Twitter’s action against the story “arguably the most brazen and unprecedented act of media suppression in this country’s history, and it is doing so for the clear purpose of supporting the Biden campaign.” 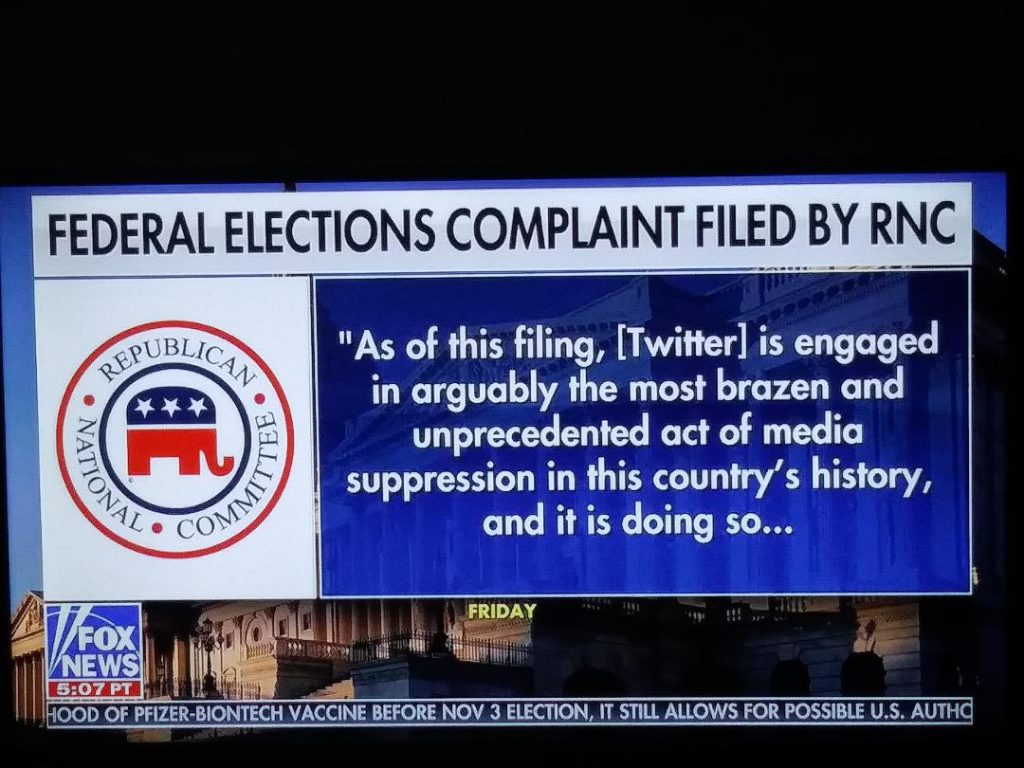 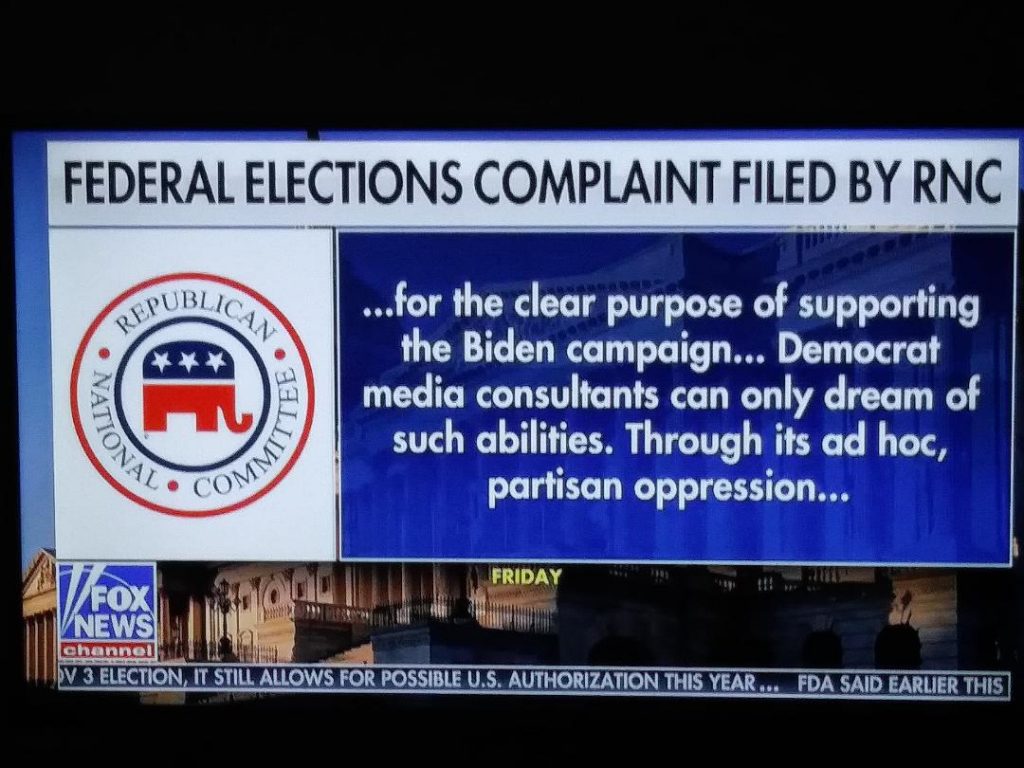 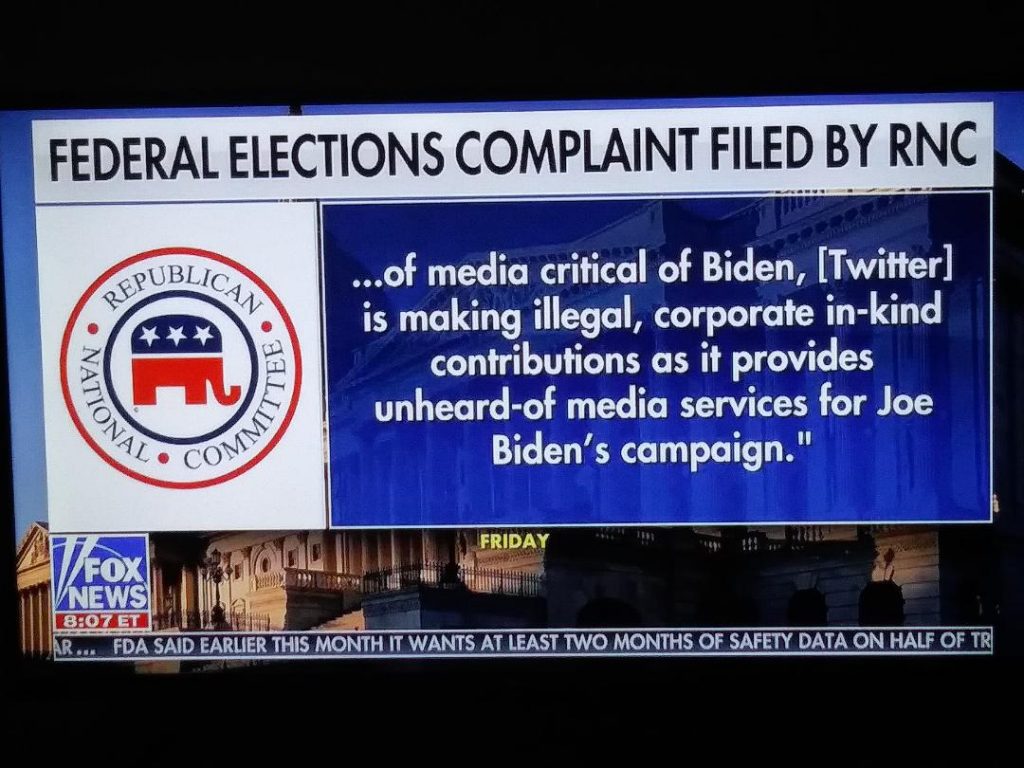 Sen. Marsha Blackburn (R-TN) is leading the way on a bill that would modify Section 230, which prevents Big Tech from liability for their censorship.

A provision in federal law enacted early in 1996 at the beginning of the internet era, known as Section 230 of the Communications Decency Act of 1996, provides legal protection for “interactive computer services,” such as Facebook and Twitter, to host content on their platforms that is violent, harassing, “or otherwise objectionable.”

Big Tech companies, unlike traditional media, are known as platforms as opposed to publishers that are not protected by Section 230 and can be held liable for their content.

However, with this legal protection, the social media giants came under scrutiny for censoring conservative political content on their platforms, leading lawmakers such as Sens. Ted Cruz and Josh Hawley to question if Facebook and Twitter were acting more like publishers than platforms for all types of ideas for their users.

“Members of all three branches of the federal government have expressed serious concerns about the prevailing interpretation of the immunity set forth in Section 230 of the Communications Act. There is bipartisan support in Congress to reform the law. The U.S. Department of Commerce has petitioned the Commission to ‘clarify ambiguities in section 230.’ And earlier this week, U.S. Supreme Court Justice Clarence Thomas pointed out that courts have relied upon ‘policy and purpose arguments to grant sweeping protections to Internet platforms’ that appear to go far beyond the actual text of the provision,” Pai said in a statement Thursday afternoon.

“As elected officials consider whether to change the law, the question remains: What does Section 230 currently mean? Many advance an overly broad interpretation that in some cases shields social media companies from consumer protection laws in a way that has no basis in the text of Section 230,” Pai continued, noting that the commission’s general counsel informed him that the FCC has the legal authority to interpret Section 230.

“Consistent with this advice, I intend to move forward with a rulemaking to clarify its meaning,” he said.

Exactly. The original bill was intended to protect social media in its infancy. That is no longer the case, given that Twitter, Facebook, and Google are huge politicized corporations.

Printed and broadcast media are not immune to disciplinary action.  Big Tech shouldn’t be either.