Things that make you go hmmmmm. 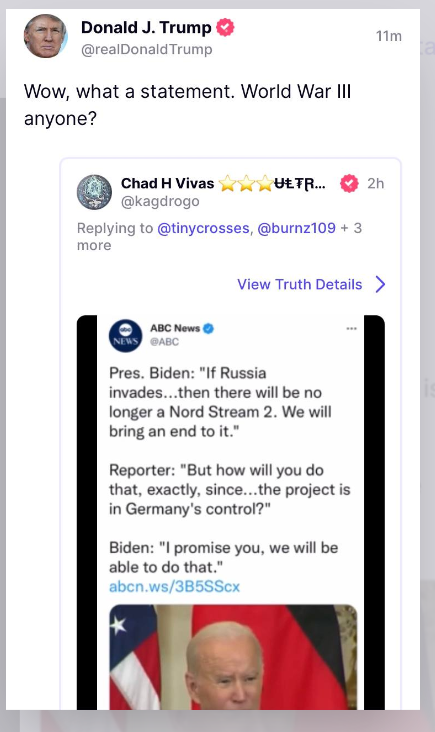 The CIA warned its counterparts in Berlin earlier this summer of possible attacks on gas pipelines in the Baltic Sea, according to a Tuesday report. 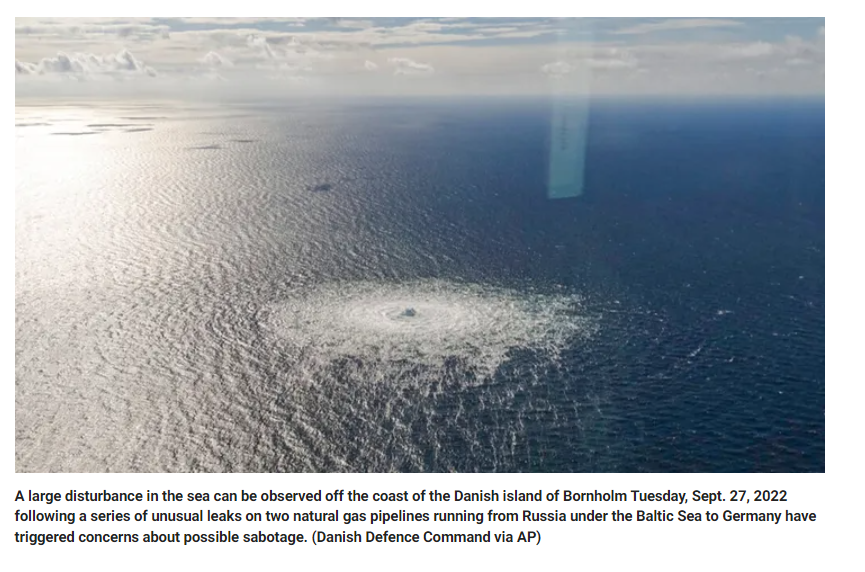 The report, which cited unnamed sources, came as explosions rattled the Baltic Sea Tuesday before unusual leaks were discovered on the Nord Stream 1 and 2 pipelines running underwater from Russia to Germany.

Some European leaders and experts are pointing to possible sabotage during an energy standoff with Russia provoked by the war in Ukraine.

The three leaks on the Nord Stream 1 and 2 pipelines, which are filled with natural gas but not delivering the fuel to Europe, overshadowed the inauguration of a long-awaited pipeline that will bring Norwegian gas to Poland to bolster the continent’s energy independence from Moscow.

The first explosion was recorded early Monday southeast of the Danish island of Bornholm, said Bjorn Lund, director of the Swedish National Seismic Network. A second, stronger blast northeast of the island that night was equivalent to a magnitude-2.3 earthquake. Seismic stations in Norway and Finland also registered the explosions.

No official presented evidence of what caused the Nord Stream problems, but with distrust of Russia running high, some feared Moscow sabotaged its own infrastructure out of spite or to warn that pipelines are vulnerable to attack. The leaks in international waters off the coast of Denmark and Sweden raised the stakes on whether energy infrastructure was being targeted and led to a small bump in natural gas prices.

The extent of the damage means the Nord Stream pipelines are unlikely to be able to carry any gas to Europe this winter even if there was political will to bring them online, analysts at the Eurasia Group said. Russia has halted flows on the 760-mile Nord Stream 1 pipeline during the war, while Germany prevented them from ever starting in the parallel Nord Stream 2.

……one of the great environmental catastrophes of our time, is unfolding tonight off the coast of Denmark. The Nord Stream pipelines, which are enormous Russian owned conduits that carry natural gas from Russia to Western Europe, have been breached.

As we speak, Nord Stream 1 and Nord Stream 2 are pouring millions of cubic meters of natural gas into the Baltic Sea. Pictures from the air, which you can now see on your screen, show a toxic bubble field more than half a mile wide. You can only guess at how many marine mammals are being killed right now – countless. But the lasting damage may be to the atmosphere.

……At the very same time that leaks in these pipelines were detected, Swedish officials recorded two powerful undersea explosions, each one of which was equivalent to hundreds of pounds of TNT. Nothing in nature can account for that. Almost immediately, the pipelines began leaking in three separate places. So, there’s only one explanation for what happened. This was an act of industrial terrorism. That was very obvious to the prime minister of Poland and he wasted no time in saying so.

……We can clearly see, he said, this was an act of sabotage, an act of terrorism. Well, yes, we can see that. So, the question is, who did it? And of course, the prime suspect is obvious. It would be the same man who caused domestic inflation here in the U.S. and stole the 2016 election from Hillary Clinton. That be Vladimir Putin. The Washington Post got right to it. “Putin,” they declared, “is now weaponizing the Nord Stream pipelines.”

According to the Canadian ambassador to the U.N., Vladimir Putin has decided to use “pollution as an act of war.” Progressive Twitter strongly endorsed this conclusion. Putin did it and that makes sense until you thought about it for just a moment. Vladimir Putin may be evil. They tell us that he is evil, but is he stupid? Probably isn’t stupid and yet and, here’s the strange part, if you were Vladimir Putin, you would have to be a suicidal moron to blow up your own energy pipeline. That’s the one thing you would never do.

……Not now, obviously. In fact, it’s so obvious that even as our famously dim secretary of State, Tony Blinken, seemed to acknowledge it, sabotaging Nord Stream, he said today is “clearly in no one’s interest.” Right, but really only half right. It is true that blowing up Nord Stream does not help Vladimir Putin. He would not do that. Why would he? But that doesn’t mean that other countries wouldn’t consider doing it. They would consider it and we know they have considered it because at least one of them has said so in public. In early February, less than three weeks before the war in Ukraine began, Joe Biden suggested on camera that he might take out these pipelines. Watch.

PRESIDENT BIDEN: If Russia invades that means tanks or troops crossing the border of Ukraine again. Then there will be, there will be no longer a Nord Stream 2. We will bring an end to it.

REPORTER: But how will you. How will you do that, exactly, since the project and control of the project is within Germany’s control?

BIDEN: We will. I promise you, we’ll be able to do it.

……That would be an unimaginably reckless act. That would be the kind of thing you would do if you wanted to start a nuclear war.

Well, one year ago:

The State Department on Thursday unequivocally warned that if Russia invades Ukraine the Nord Stream 2 pipeline will sit unused at the bottom of the ocean.

The controversial pipeline has become the U.S. and NATO’s biggest bargaining chip in its attempts to preserve Kyiv’s sovereignty.

……Under Secretary for Political Affairs Victoria Nuland said. “If Russia invades Ukraine, one way or another, Nord Stream 2 will not move forward.”

Her comments echoed those made by Secretary of State Antony Blinken earlier this week, but reporters pushed back on the ability to enforce this threat given the pipeline’s physical completion.

“As Sen. Cruz likes to say, ‘It is currently a hunk of metal at the bottom of the ocean’,” she added. “No gas will flow through it until those things happen.”

A Polish politician ascribed the sabotage of the Nord Stream pipelines to the U.S.: 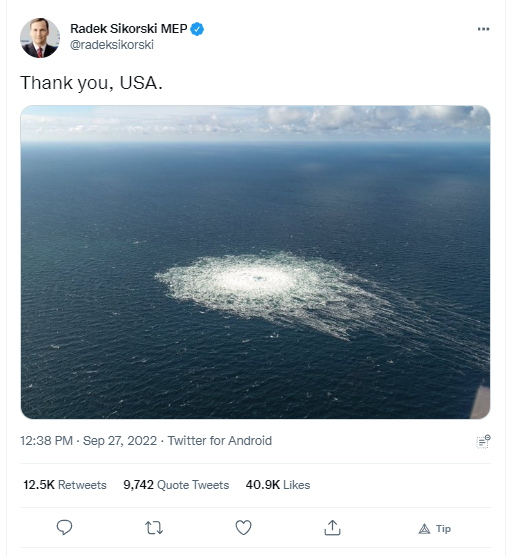 The day he was installed, Biden signed an executive order to block the Keystone XL pipeline, wiping out thousands of jobs and declaring war on the U.S. energy industry. He’s also  banned new oil and gas development on public land. But he helped the Russians with Nord Stream. He’s actually subsidizing the Russian war effort in Ukraine.  And after all that money his family made from Burisma.

Now, all of a sudden he blows up parts of the Nord Stream pipeline.

The CIA and the Biden regime just implicated themselves.