Faculty groups at Rutgers University are standing behind the barefaced racist comments delivered by one of their own, Dr. Brittney Cooper, who recently proclaimed of white people, “we got to take these motherfuckers out.”

According to Cooper, white people ruined everything in a world that was apparently perfect before they arrived on the scene.

“White people showed up being raggedy and violent and terrible and trying to take everything from everybody,” the 41-year-old tenured professor argued. “White people are committed to being villains.”

During an online interview in September with Michael Harriot of The Root, Cooper expressed her opinion that “white folks” are not “eternal,” asserting that they are an aberration in history and going so far as to celebrate a statistic showing a decline in white birth rates, adding that “they kind of deserve it.”

“Like, the thing I want to say to you is we got to take these motherf***ers out. But, like, we can’t say that, right? We can’t say, like, I don’t believe in a project of violence. I truly don’t,” Cooper also stated.

It would be impossible for a white professor to stay employed if the immutable characteristics of skin color were reversed in this instance, but the double standard is lost on the Rutgers branch of the American Association of Professors and American Federation of Teachers. Without any sense of irony, the groups issued a statement denouncing the outrage over Cooper’s remarks as “racist.”

……Cooper is not ashamed of her unabashed racism, having broadcast her hatred of white people on social media a number of times before.

Last year on MSNBC, Cooper accused conservatives of attempting to kill black people by reopening society during the pandemic.

She also wrote on her blog in 2012 that Arizona Gov. Jan Brewer was “white rage personified” after a photo surfaced of her pointing a finger at Barack Obama when they met at a Phoenix airport. In addition, she inexplicably went after former U.S. House Speaker and conservative author Newt Gingrich.

“Newt Gingrich is white rage personified. And for it, he gets loads of applause. So is Jan Brewer, but usually we think of white rage in masculine terms,” Cooper wrote.

Her latest interview with The Root showcased Cooper’s vitriol even more audaciously. The segment was called “Unpacking The Attacks On Critical Race Theory” which is a peculiar topic of choice considering that many of her contemporaries insist that CRT doesn’t exist. 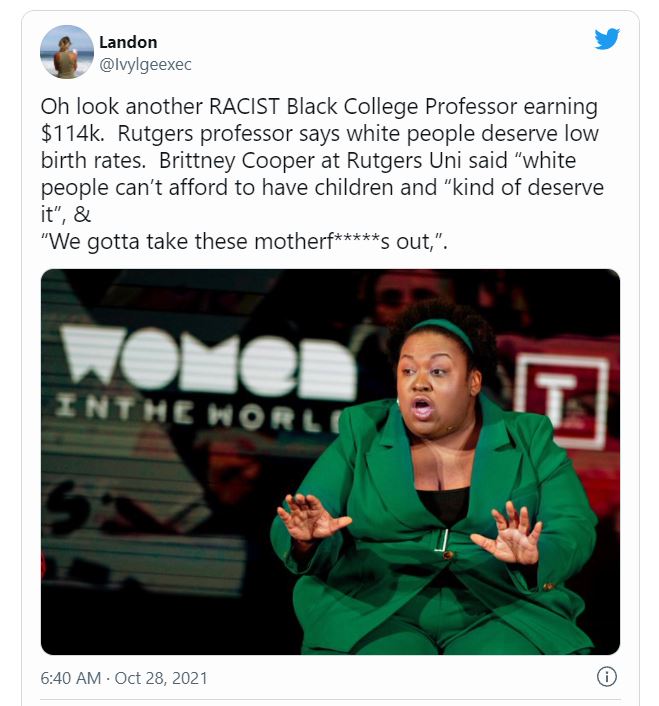 What a big, ugly steaming pile of racist shit.  If they don’t fire her ass, it will be obvious that they share her feelings that “white motherfuckers” including their white students, the white parents who pay tuition, and any white donors and alumni to and of Rutgers, “need to be taken out.”