For some reason it seems fitting that the long and raucous House hearing with FBI agent Peter Strzok wouldn’t have been complete without inspiring a short video and gif that might make your skin crawl, and sure enough, it was delivered.

Watch the video at the link:

He really acts like that. An FBI agent. Let that sink in.

These are his actual facial expressions during the testimony: 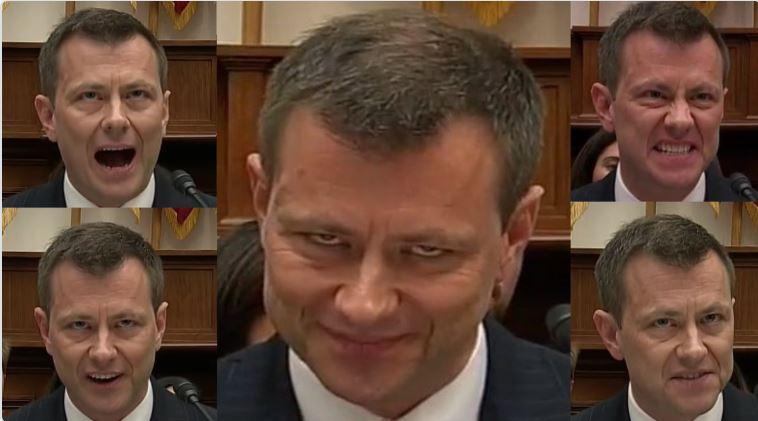 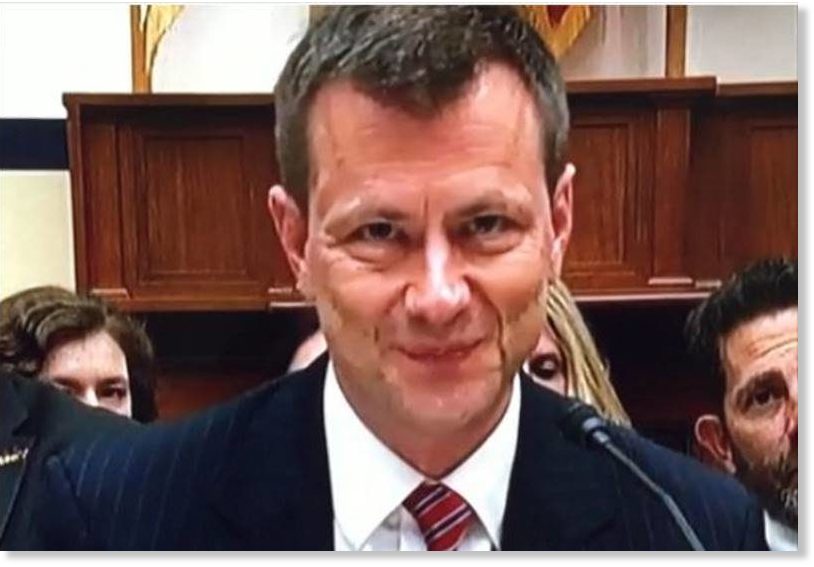 He has loose crews that need to be tightened with a pharmaceutical wrench.

Stzrok helped launch an investigation under false pretenses, spy on the Trump campaign, and lied to the  FISA court, but the RINOs don’t think his political animus affected his judgment.

The entire IG Report describes the actions of an out of control politicized government agency rife with bias and corruption.  The behavior and actions of FBI agents, FBI attorneys, and Comey himself outlined in the report are a blatant demonstration of anti-Trump bias:

We were cognizant of and considered these messages in reaching the conclusions regarding the specific investigative decisions discussed below. In particular, we were concerned about text messages exchanged by Strzok and Page that potentially indicated or created the appearance that investigative decisions were impacted by bias or improper considerations. As we describe in Chapter Twelve, most of the text messages raising such questions pertained to the Russia Investigation. Nonetheless, the implication in certain Russia-related text messages that Strzok might be willing to take official action to impact presidential candidate Trump’s electoral prospects—for example, the August 8, 2016 text exchange in which Page asked Strzok “[Trump’s] not ever going to become president, right? Right?!” and Strzok replied “No. No he won’t. We’ll stop it”—caused us to question the earlier Midyear investigative decisions in which he was involved, and whether he took specific actions in the Midyear investigation based on his political views.

Strzok didn’t stop Trump, but it wasn’t for lack of trying.

When grilled about the statement in his text, Stzrok got a sudden case of selective amnesia and claimed he didn’t remember.  That’s just one example of perjury he committed throughout the testimony.

The left-wing Deep State really didn’t believe Trump would win the election. As an ‘insurance policy‘ during the campaign, the FBI, James Comey, the Hillary campaign, a reprobate former MI6 agent, and the Obama regime all had a hand in producing and paying for a lurid, fabricated dossier which was then used to secure a warrant from the FISA court under fraudulent claims, to spy on the Trump campaign.

They tried to subvert the election and our democratic republic. They should be in jail.

So, are the Strzok hearings going to result in charges against this little shitbag, or is it just more hot air?

The principal question before the joint investigation of the House Judiciary and Oversight Committees is whether the Democratic administration’s law-enforcement and intelligence arms strained to manufacture an espionage case against the Republican candidate, having buried an eminently prosecutable criminal case against the Democratic presidential nominee.

It should be straightforward to answer this question, provided that the investigative process has the one attribute central to any credible probe: the capacity to compel the production of evidence and testimony, with the corollary power to hold witnesses in contempt for defiance.

The House investigation has devolved into farce because it lacks this feature.

Oh, it exists on paper. There is even a statute making contempt of Congress a crime, punishable by up to a year in prison (and not less than a month). That may not sound like much, but the months can pile up: A separate offense occurs each time a question is ducked or a document is not surrendered. As the Wall Street Journal’s Bill McGurn explains, Congress has inherent power to enforce its subpoenas unilaterally, or it can seek assistance from the other branches.

But then reality intrudes. The committees pursuing the probe lack either the will or the votes — or perhaps both — to hold witnesses in contempt. This, despite audacious refusals to answer questions and turn over documents that would explain when and why the Trump–Russia investigation commenced.

It is an elaborate game of chicken.

……despite Republican control of the House, the votes may not be there to pass and enforce a contempt citation. Without a credible threat of enforcement, the Justice Department and FBI will continue defying subpoenas, and the FBI lawyers will keep instructing Strzok, Lisa Page, and other key witnesses not to answer questions.

It is not possible to get at the truth that way. A joint committee determined to get at the truth would use its power to gather all the documentary evidence before interrogating witnesses. It would not convene for ten hours to allow 75 legislators five minutes each of TV-camera time with Strzok; it would hire a competent investigator and trial lawyer to spend ten hours walking Strzok through every document — a carefully planned, exhaustive examination in which he is forced to answer tough questions, not make speeches.

That isn’t what’s happening. Instead, Strzok gets to present the story he wants to tell, avoiding the questions he and the FBI do not want to answer. Without access to the full documentary record, the committees have no practical way to cross-examine him.

……The question is not whether the investigator is biased, but whether bias leads the investigator to do illegal or abusive things. In the case of Strzok and his colleagues, the questions are whether they applied different standards of justice to the two candidates they were investigating; whether, with respect to Trump in particular, they pursued a counterintelligence probe in the stretch-run of an election, premised on the belief that he was a traitor, based on information that was flimsy and unverified.

The Dems will never convict one of their own, and the Republicans don’t have the balls.