Two enduring questions have lingered during the boomerang of the now-discredited FBI collusion probe.

First, when did agents suspect Christopher Steele had gone beyond being an informant to an agent provocateur trying to influence the 2016 election?

And secondly, when did the bureau realize a Yahoo News article wasn’t independent proof of his allegations but rather a leak from his infamous dossier?

A newly declassified text message from lead agent Peter Strzok  — released last week to GOP Senate investigators Ron Johnson and Charles Grassley — suggests the FBI knew the answers to both questions in September 2016, well before agents went to a court and secured a Foreign Intelligence Surveillance Act warrant suggesting Steele was credible and the Yahoo News article was independent proof of his anti-Trump allegations.

“Looking at the Yahoo article, I would definitely say at a minimum Steele’s reports should be viewed as intended to influence as well as to inform,” Strzok wrote a fellow FBI employee on Sept. 23, 2016 whose name was redacted from the publicly released message. 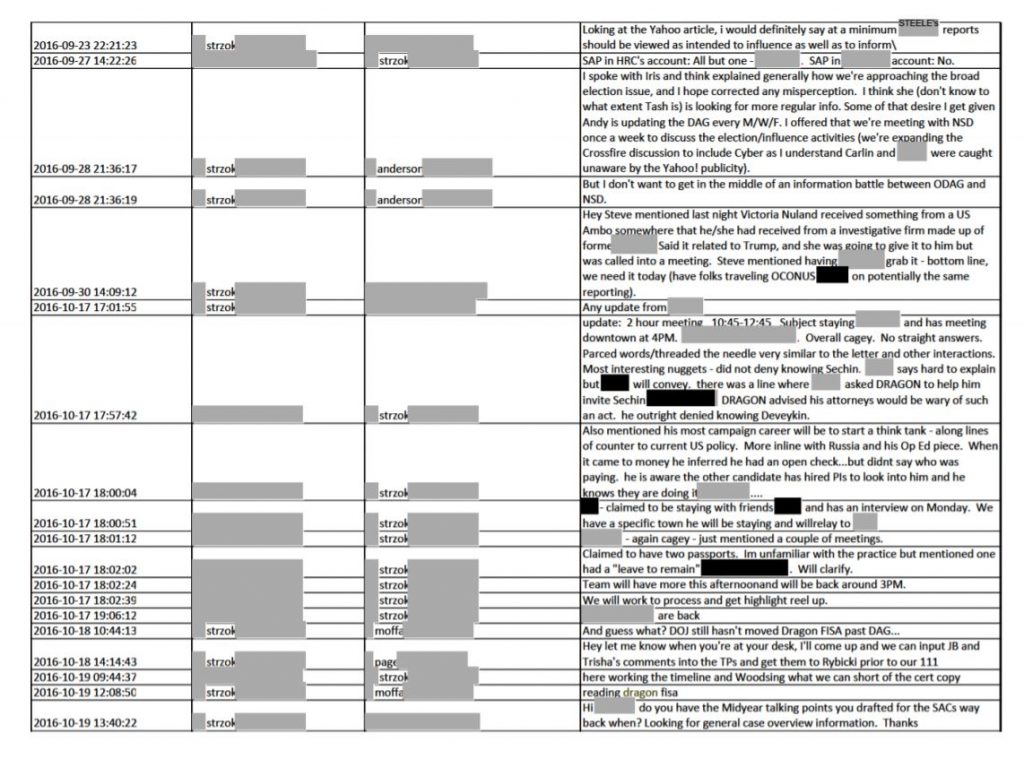 Strzok, who was fired from the FBI for misconduct, has insisted the FBI got taken for a ride by Steele and that he and his team made mistakes because they were overworked. “The Steele report was a problem for the investigation, because it sent people off on a series of wild-goose chases,” he told Atlantic magazine in September.

“Mistakes”?  He and his lover Lisa Page kept running texts coms on how much they and other FBI agents hated Trump and were going to do everything they could to subvert the election.

But the text messages and other recently declassified messages suggest the FBI knew prior to the FISA chase that Steele was leaking in an effort to influence  — to the news media and the State Department –in violation of his confidential informant agreement and that the Yahoo article was derived from his dossier.

Nonetheless, a month later on Oct. 21, 2016, the FBI represented to a court it had no derogatory information to question his credibility and offered in its FISA warrant the Yahoo article as independent proof.

A government investigator, long involved in the review of the FBI’s behavior in the Russia collusion case, told Just the News the new text messages were delayed in their release to the public until last week because they have become important to Special Counsel John Durham’s criminal probe. “This is some of the stuff that is at the heart of the case,” the source said.

Justice Department Inspector General Michael Horowitz strongly faulted the FBI for using the Yahoo article as proof in the FISA warrant and failing to tell the court their informant was leaking. “FBI assessed in the Carter Page FISA applications, without any support, that Steele had not ‘directly provided’ the information to Yahoo News,” the watchdog concluded.

The DOJ report on the Russia FISA, HERE