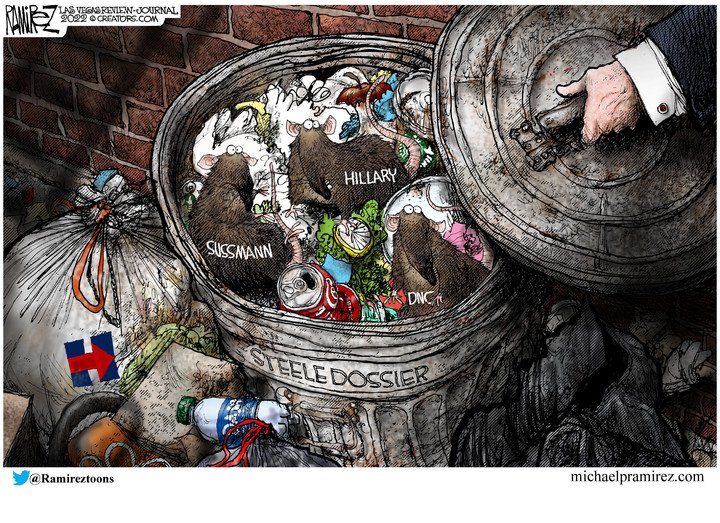 The FBI agents who knew Hillary was behind the Trump-Russia lie were the same agents on the Mueller team who neglected to include this important information in Mueller’s report.

Newly released CIA memoranda suggest the tech gurus behind the Alfa Bank hoax also tracked Donald Trump’s movements to devise another collusion conspiracy theory. While smaller in scale than other aspects of Spygate, the Yotaphone hoax represents an equally serious scandal because it involved both the mining of proprietary information and sensitive data from the Executive Office of the President (EOP) and the apparent surveillance of Trump’s physical movements.

When Special Counsel John Durham charged former Hillary Clinton campaign attorney Michael Sussmann in September 2021, the indictment focused on the Alfa Bank hoax that Sussmann, tech executive Rodney Joffe, and other cybersecurity experts had crafted. The indictment detailed how Joffe and other tech experts had allegedly mined data and developed “white papers” that deceptively created the impression that Trump had maintained a secret communication network with the Russia-based Alfa Bank.

……The 27-page indictment, however, also spoke of Sussmann sharing “updated allegations” on February 9, 2017, to another U.S. government agency, namely the CIA, while allegedly repeating the same false claim that he was not sharing the “intel” on behalf of any client. From the framing of the indictment, it appeared that what Sussmann had shared with the CIA concerned the same Alfa-Bank data provided to the FBI several months earlier, albeit updated.

But then two months ago, as part of the government’s “Motion to Inquire Into Potential Conflicts of Interest,” Durham’s team revealed for the first time that when Sussmann met with the CIA in early 2017, he provided agents with internet data beyond the Alfa Bank conspiracy theory. This data, Sussmann claimed, “demonstrated that Trump and/or his associates were using supposedly rare, Russian-made wireless phones in the vicinity of the White House and other locations.”

The “supposedly rare, Russian-made wireless phones” were “Yotaphones.” Following Durham’s filing of the conflicts of interest motion, it appeared Sussmann bore responsibility for peddling a second conspiracy theory to the CIA. But the details contained in the government’s motion proved insufficient to understand the Yotaphone angle to Spygate. That all changed on Friday, when the special counsel filed two CIA memoranda memorializing what Sussmann said about the Yotaphones and the data Joffe and his tech experts had compiled.

The first memorandum, dated January 31, 2017, summarized what Sussmann told a former CIA employee in hopes of scoring a meeting with the CIA. Sussmann said his client “had some interesting information about the presence and activity of a unique Russian made phone around President Trump.” Sussmann claimed the activity started in April 2016 when Trump was working out of the Trump Tower on its Wi-Fi network. That phone was also used on the “Wi-Fi at Trump’s apartment at Grand Central Park West,” according to Sussmann.

Former Clinton campaign manager Robby Mook testified as part of the first criminal trial out of Special Counsel John Durham’s years-long investigation into the origins of the ‘Russian collusion’ hoax.

Former Clinton campaign manager Robby Mook testified Friday that then-Democratic presidential nominee Hillary Clinton approved the dissemination of materials alleging a covert communications channel between the Trump Organization and Russia’s Alfa Bank to the media, despite campaign officials not being “totally confident” in the legitimacy of the data.

Former FBI General Counsel James Baker testified Thursday that the bureau investigated the data alleging a Trump connection to the Kremlin-linked bank, and found that “there was nothing there.”

Mook was called to the stand for testimony by Michael Sussmann’s defense Friday.

During cross-examination by government prosecutor Andrew DeFillippis Friday, Mook was asked about the campaign’s understanding of the Alfa Bank allegations against Trump and whether they planned to release the data to the media.

Mook said he was first briefed about the Alfa Bank issue by campaign general counsel Marc Elias, who at the time was a partner at lawfirm Perkins Coie.

Mook testified that he was told that the data had come from “people that had expertise in this sort of matter.”

“I discussed it with Hillary as well,” Mook said.

……The government asked Mook if Clinton approved “the dissemination” of the data to the media.

……Sussmann has been charged with making a false statement to the FBI when he told Baker in September 2016, less than two months before the presidential election, that he was not doing work “for any client” when he requested and attended a meeting in which he presented “purported data and ‘white papers’ that allegedly demonstrated a covert communicates channel” between the Trump Organization and Alfa Bank, which has ties to the Kremlin.

……The government, in its opening statement Tuesday, argued that Sussmann’s delivery of the Trump-Alfa Bank allegations to the FBI was part of the Clinton campaign’s plan to create an “October surprise” against then-candidate Donald Trump.

Former Clinton campaign lawyer Marc Elias testified for more than three hours on Wednesday as part of the trial of Michael Sussmann, confirming that he hired Fusion GPS to run opposition research for Hillary For America during the 2016 election cycle, and revealing that he would share “the fruits of their work” with senior Clinton campaign officials.

Elias, a former partner at law firm Perkins Coie, and the former general counsel for the 2016 Clinton campaign testified he hired opposition research firm Fusion GPS in April 2016, saying he retained the firm on behalf of the Clinton campaign at “about the time that Donald Trump looked like he was going to be the nominee.”

Elias also said that Fusion GPS, at the time, was doing work for the Democratic National Committee, related to its work for the Clinton campaign.

Elias said that if he had gathered information from Fusion GPS that he thought would “help the campaign,” he would pass it to officials in either their communications division or the research team.

Elias said Fusion GPS was researching a “broad” range of issues related to then-candidate Trump, and said he was regularly briefed by Fusion GPS employees Glenn Simpson and Peter Fritsch in his office.

Fusion GPS is the opposition firm which commissioned the now-infamous anti-Trump dossier, which contained allegations of purported coordination between Trump and the Russian government. The dossier was authored by Christopher Steele, an ex-British intelligence officer.

……FBI Special Agent Scott Hellman testified on Tuesday afternoon that the data revealing the alleged covert communications channel between Trump and Russia that Sussmann brought to the FBI turned out to be untrue, and said he did not agree with the narrative. Hellman testified that whoever drafted the narrative describing the DNS data was “5150,” and clarified on the stand that meant he believed the individual who came to the conclusions was “was suffering from some mental disability.”

FBI investigated Sussmann claims of Trump, Russian bank connection: ‘There was nothing there’:

The FBI found that “there was nothing there” after investigating the information brought to the bureau in September 2016 by Clinton campaign lawyer Michael Sussmann alleging a covert communications channel between the Trump Organization and a Russian bank, former FBI General Counsel James Baker testified Thursday.

……Baker testified Thursday that the FBI began an investigation into the Trump-Alfa Bank allegations, which lasted “several weeks, maybe a month, maybe a month and a half.”

“We concluded there was no substance,” Baker testified. “We couldn’t confirm it. We could not confirm there was a surreptitious communications channel.”

Baker added: “There was nothing there.”

Clinton attorney Marc Elias was directly involved in tapping Fusion GPS to spy on the Donald Trump campaign on behalf of Clinton while a partner at left-wing law firm Perkins Coie.  He should be in Durham’s crosshairs as well.

The same liberal garbage networks that screamed “RUSSIA RUSSIA RUSSIA”  on a 24 hour loop, downplayed the investigation and are now ignoring the findings that point directly at Hillary’s illegal hacking.

The “Russian collusion” hoax fell apart during the first month of Trump’s presidency but they pushed it anyway.

The entire Dem impeachment shitshow was based on fraud.

Having said that, Durham should expand his investigation to Mueller, Comey, Strzok, Brennan, and Obama for their role in this.

There’s plenty of evidence to keep Durham busy for a long time: The Dems were so desperate to thwart the election of Donald Trump that they cooked up an elaborate scheme involving a fake dossier and weaponized government agencies.  As an ‘insurance policy‘ during the campaign, the FBI, James Comey, the Hillary campaign, and the Obama regime all had a hand in producing and paying for a lurid, fabricated document which was then used to secure a warrant from the FISA court under fraudulent claims, to spy on the Trump campaign.

Former MI6 operative, Christopher Steele, was hired by Fusion GPS, a corporate espionage firm, to dig up dirt on Trump but came up with a fabricated smear instead. Not deterred by the total implausibility of the story described in the dossier, GPS shopped the dossier to the liberal media and paid journos to feed the fake story to the press with predictable results; the left wing morons at Buzzfeed and  CNN  jumped at the chance to print the fake news.  The FBI even offered $50,000 to Steele for information.

The Obama regime paid almost one million dollars to the same law firm that funneled money to GPS.  Somewhere in that mess was RINO John McCain,  who received the dossier from a former British ambassador to Moscow.  Texts between Lisa Page and Andrew McCabe show that Obama was briefed on the spying.  They also inserted a mole into the Trump campaign.

After the fake dossier failed, they used the planted story about the Trump campaign having ‘inside knowledge’ of the Russians possessing Hillary’s emails.

James Comey, who is an unscrupulous douchebag, was part and parcel of the conspiracy to undermine the election and overthrow a duly elected president though false allegations and sedition. He also leaked classified information when it suited his purpose and lied to the FISA court.

Former CIA director John Brennan, colluded with British and Estonian spies in an attempt to undermine the election.

All this shit can be traced back to Hillary’s campaign and Obama’s regime. They went to insane lengths in an attempt to subvert the election. All of the perps in this conspiracy should be in orange jumpsuits.

When is Durham coming for them?